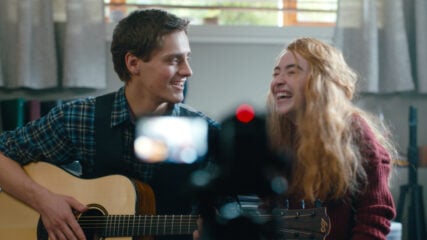 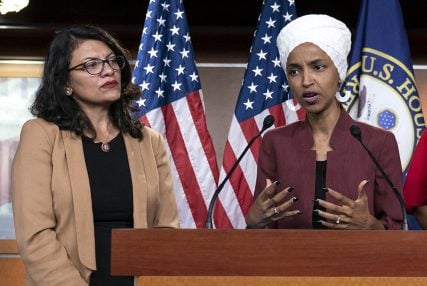 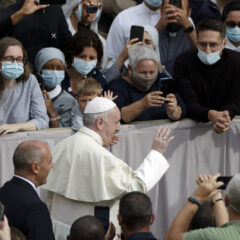 Pope reverts to maskless old ways amid growing criticism
By Roxanne Stone — October 21, 2020
ROME (AP) — Francis has faced sharp criticism even from his most ardent supporters and incredulousness from some within the Vatican for refusing to wear a mask.

Michael Hebb, a death wellness expert, wants people to plan for their end
By Yonat Shimron — October 21, 2020
(RNS) — ‘With the coronavirus there’s been an incredible wake-up call to our mortality,’ said Hebb, who has created resources to help people learn how to plan for it and support loved ones who may be nearing the end of life.

James MacDonald and Harvest Bible Chapel reach multimillion-dollar agreement
By Yonat Shimron — October 20, 2020
(RNS) — MacDonald, who was fired last year, will get $1.2 million and a vacant parcel of property adjacent to the church’s Crystal Lake Campus. He will also be allowed to run his Walk in the Word ministry independently. 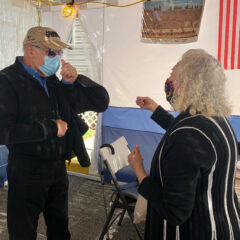 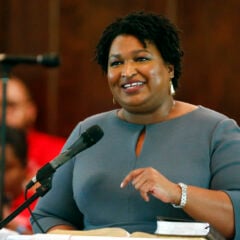 Stacey Abrams’ passion for voting began with her preacher parents
By Adelle M. Banks — October 16, 2020
(RNS) — ‘The family is just a tight-knit cadre of people who understand that it is incumbent upon them to vote,’ said her Georgia pastor.

Kentucky church to investigate Chris Rice, Christian musician, after abuse allegation
By Bob Smietana — October 15, 2020
NASHVILLE, Tenn. (RNS) — A former student at a Kentucky church has alleged that Rice sexually abused him after meeting him at a church retreat. 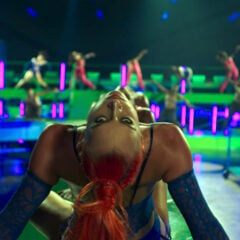 Rihanna’s hadith fashion show moment has some asking: Is Islam too sacred for art?
By Paul O'Donnell — October 15, 2020
(RNS) — Other faiths have all seen their texts and imagery used and abused by art and fashion. Islam and Muslims still enjoy — and expect — a bit more protection. 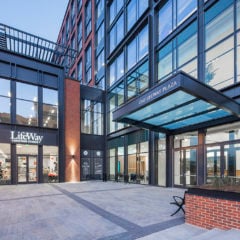 LifeWay lawsuit against former CEO Thom Rainer remains on file
By Yonat Shimron — October 2, 2020
(RNS) — The back and forth from the LifeWay board of trustees has many Southern Baptists feeling whiplash. The haggling may, however, be a byproduct of the Christian publisher’s steep financial challenges.

Southern Baptist publisher LifeWay halts suit against former CEO Thom Rainer
By Yonat Shimron — October 1, 2020
(RNS) — Todd Fannin, LifeWay's board chairman, issued an update saying that ‘both parties are currently exploring the possibility of an agreed upon resolution of the differences.’ 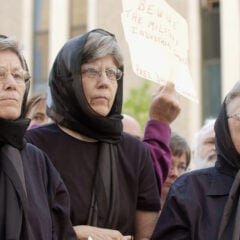 Ardeth Platte, Dominican nun dedicated to no-nukes cause, dies at 84
By Paul O'Donnell — September 30, 2020
(RNS) — She spent years in prison for nonviolent civil disobedience and later served as an inspiration for a character on the popular Netflix show ‘Orange Is the New Black.’ 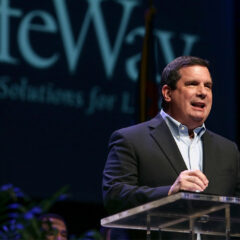 Southern Baptist publishing arm, LifeWay, sues former president Thom Rainer
By Yonat Shimron — September 29, 2020
(RNS) — LifeWay Christian Resources, the publishing arm of the Southern Baptist Convention, has sued its former president and CEO, alleging he violated a noncompete clause in his contract that forbids him from working with competitors. 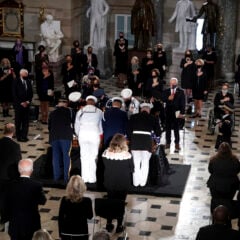 With ‘profound sorrow’: Ginsburg lies in state at US Capitol
By Roxanne Stone — September 25, 2020
WASHINGTON (AP) — The late Supreme Court Justice Ruth Bader Ginsburg is lying in state Friday at the U.S. Capitol, the first woman in American history to do so, in commemoration of her extraordinary life.
Page 1
Page 2 →

News
Attorneys for John MacArthur denounce headlines reporting a church outbreak of COVID-19 cases
News
EXCLUSIVE: Trump, confirmed a Presbyterian, now identifies as ‘non-denominational Christian’
Opinion
There’s a theology driving Sean Feucht’s worship music protests — and it’s a popular one
News
In Disney’s ‘Clouds,’ Justin Baldoni makes a teen cancer movie about joy
News
COVID-19, food crisis give new life to ancient practice of gleaning
© Copyright 2020, Religion News Service. All rights reserved. Use of and/or registration on any portion of this site constitutes acceptance of our User Agreement and Privacy Policy, Privacy Statement and Cookie Notice. The material on this site may not be reproduced, distributed, transmitted, cached or otherwise used, except with the prior written permission of Religion News Service.