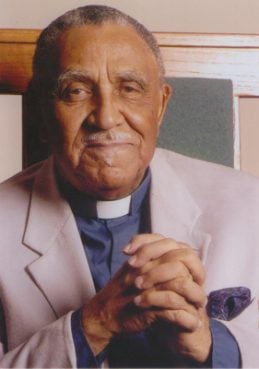 (RNS2-FEB10) Civil rights leader Rev. Joseph Lowery used elements of “Lift Every Voice and Sing,” which is widely considered the unofficial black national anthem, in his prayer at President Obama’s inauguration. For use with RNS-BLACK-ANTHEM, transmitted Feb. 10, 2009. Religion News Service photo courtesy of Coalition for the People’s Agenda.

(UNDATED) When the Rev. Joseph Lowery rose to offer the closing prayer at President Obama’s swearing-in ceremony, he knew which hymn he would borrow to start his prayer.

“God of our weary years, God of our silent tears, thou who has brought us thus far along the way,” he prayed, invoking the third verse from “Lift Every Voice and Sing,” the hymn that’s long been considered the unofficial black national anthem.

“Thou who has by thy might, led us into the light, keep us forever in the path, we pray.”

The words rang out across the National Mall that day, and again the next at the Washington National Cathedral in the sermon preached to the new president. For more than a century, they have been used to mark special occasions, including the birthdays of Abraham Lincoln and the Rev. Martin Luther King Jr., and have become a staple for Black History Month each February.

Lowery, a retired United Methodist minister who co-founded the Southern Christian Leadership Conference with King, said he thought the song was entirely appropriate for the inaugural of the nation’s first African-American president.

“It had historicity; it had the religious context,” said Lowery, who used the third stanza as a regular hymn of praise in his worship services for 25 years. “The black experience is sort of wrapped up in that hymn.”

Though Lowery has always called it a “national hymn” because he didn’t think the nation should have two separate anthems, many African-Americans give it the same honor as the traditional national anthem: They stand when it is sung.

“It is our `Star-Spangled Banner,'” said Jackie Dupont-Walker, social action chair of the African Methodist Episcopal Church, which is why many African-Americans respectfully stand when the hymn is played.

“Lift every voice and sing, ’til earth and heaven ring,” the song begins. “Ring with the harmonies of liberty.” Its words include echoes of slavery and triumphs of freedom, moving from the “dark past” to a present hope and looking toward the “new day” ahead.

The song traces its roots to a 1900 celebration of Lincoln’s birthday in Jacksonville, Fla., according to a 2000 book, “Lift Every Voice and Sing: A Celebration of the Negro National Anthem.” James Weldon Johnson penned the words for the occasion; his brother, J. Rosamond Johnson, set them to music.

“Our New York publisher, Edward P. Marks, made mimeographed copies for us and the song was taught to and sung by a chorus of five hundred colored schoolchildren,” he wrote in 1935.

The song that would catch on across the country initially “passed out of our minds,” Johnson wrote. But children kept singing it, he said, passing it on to other children. Soon the song was pasted into the back of hymnals, Bibles and schoolbooks.

The song grew in popularity when Johnson became an executive of the NAACP.

“It was sung at the opening of every meeting,” said Roland Carter, who arranged the popular concert version of the song and is a professor of American music at the University of Tennessee at Chattanooga. “And `We Shall Overcome’ would be the closing anthem.”

In one sign of how popular the song became, Carter’s arrangement was played in space to awaken astronauts aboard the Space Shuttle Discovery in 2006.

Now that a black man presides at the White House, some have wondered if the country still needs Black History Month, much less a black national anthem. The Rev. Vinton Anderson, a retired bishop in the African Methodist Episcopal Church, sees a future for the hymn.

“I think we should continue the tradition of singing it,” said Anderson, who helped place the song in the AME Church’s bicentennial hymnal in 1984. “It reminds us of where we are, where we’ve come from and where we hope to go.”

The Rev. Bernard Richardson, dean of the chapel at predominantly black Howard University in Washington, believes the hymn isn’t just for black Americans.

“I think it speaks to the hopes of, particularly, African-Americans throughout our history,” he said. “But also I think the song is one that not only gives hope but it also challenges to stay the path and to recognize the importance and significance of God in the struggle for freedom.”

Though the hymn is a staple in African-American gatherings — from church services to convocations at historically black universities — it has been embraced by people of a range of backgrounds. The song is included in Methodist, Lutheran and Episcopal hymnals, among others.

The Rev. Sharon Watkins, president of the predominantly white Christian Church (Disciples of Christ), chose the same stanza of “Lift Every Voice and Sing” as Lowery did when she preached at the National Prayer Service the day after Obama’s inauguration.

For a moment, when she heard the civil rights veteran use those same words in his prayer, she had second thoughts about using them.

“But I just thought, no, this belongs to everybody,” Watkins said. “Those James Weldon Johnson words, they’re just powerful.”