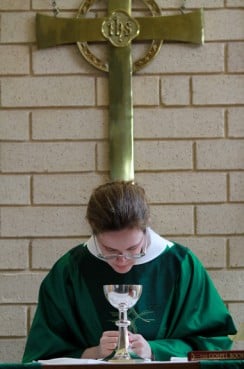 DURHAM, N.C. (RNS) Lauren Winner is a jumble of contradictions: A Jew who found Christianity in a dream starring Daniel Day Lewis as Jesus, an accomplished historian who rides an oversized tricycle to work, and a memoir writer who wants to keep details of her private life private.

In her latest book, “Still: Notes on a Mid-Faith Crisis,” Winner, 35, writes about what happens when belief falters. Her spiritual crisis, she writes, was precipitated by the death of her mother from cancer and the breakup of her marriage three years ago.

“In my case, as everything else was dying, my faith seemed to die, too,” the recently ordained Episcopal priest writes. “God had been there. God had been alive to me. And then, it seemed, nothing was alive — not even God.”

In short chapters that read more like journal entries, Winner meditates on what it's like to hit “the wall” when prayer seems hollow, and the idea of God false.

A professor of Christian spirituality at Duke Divinity School, Winner said it wasn't easy to leave her husband.

“I had a strong theological sense that Christians stay married, and that the essential Christian task is reconciliation,” she said over lunch. 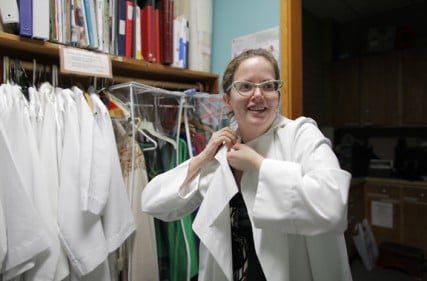 She also worried divorce would confirm an inconsistent character flaw. So Winner being Winner, she used the crisis as an occasion to examine another aspect of her spiritual being: doubt.

“She is unusual, and part of what makes her unusual is writing for a wider audience,” said Richard Lischer, professor of preaching at Duke. “That's a trend you wouldn't have seen 30 years ago. There's a greater focus on how religion is lived in individual life, rather than on doctrinal concerns or conflicts.”

Brainy and articulate, with trademark vintage cat-eye glasses, Winner possesses a flair for narrative and a willingness to use her life's story as an easel.

A native North Carolinian, she never learned to ride a bike (hence the adult tricycle), and is fond of making unconventional style statements, like celebrating Communion while wearing cowboy boots with bright red flowers peeking out from under her chasuble.

Winner's breakout 2002 memoir, “Girl Meets God,” was about her conversion from Judaism to Christianity. It came, she wrote, after dreaming she was kidnapped by “a dark Daniel-Day-Lewis-type man” who turned out to be Jesus. The book, written while she was a graduate student at Columbia University, established Winner as a crossover writer, capable of appealing to contemporary evangelicals as well as a wider audience of literary secularists who may also be spiritual seekers.

Winner followed up with two more popular releases: “Mudhouse Sabbath,” about the Jewish spiritual practices she missed after her conversion, and “Real Sex: The Naked Truth about Chastity,” in which she argued that biblically sanctioned sexual relations are only those confined to marriage.

Winner said she no longer feels comfortable doling out advice on sexual ethics. Nor does she want to talk about her marriage or any other subsequent relationships. The couple were married six years and split up in 2009. 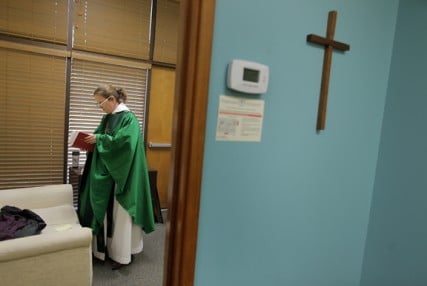 “Still” reflects that tightrope act: It is at once a veiled attempt to describe a personal crisis and what Lischer called a “book of hours,” a collection of devotions comprising prayers and meditations.

If her life turned out messy, Winner seems to say, why not use that as an example to help others going through similar quandaries?

“In Christianity there's this script of, you do the right things and you will not come to that place of despair, and something is wrong with you if you do,” she said. “I didn't feel I had an abundance of preparation for hitting that experience.”

Like Anne Lamott (“Traveling Mercies”), or Elizabeth Gilbert (“Eat, Pray Love”), Winner is at her best spinning small but hopeful meditations on life's imperfections. She writes in one chapter about being served fresh baked Communion wafers made by the children of a local parish. The caramel aftertaste of the wafer lingers in her mouth, reminding her of the sweetness of her faith.

In another chapter, she tells a story she heard of a girl about to be confirmed who announces she's not sure she believes all the precepts of her faith. The girl's father, the pastor, tells her that confirmation is not about promising to believe forever; it's about forever wrestling with those promises.

“As a young woman, to read about a peer writing about her struggles is different than reading an older man or a saint from 1,000 years ago,” said Sarah Jobe, a Duke Divinity School graduate who runs a writing class for prisoners alongside Winner at the Raleigh Correctional Center for Women.

Winner's appeal, Jobe thinks, lies in allowing other women, and men too, to open up about their own spiritual flaws.

“Naming struggle is risky for everyone,” Jobe said. “It takes a belief that your falling down isn't the last word. There's a larger story beyond your struggle.” 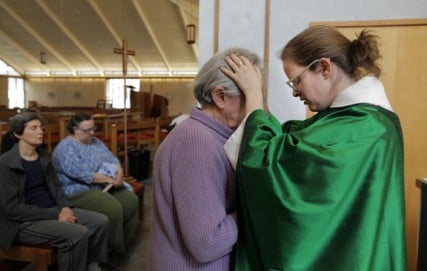 Although Winner's book does not end on a note of redemption, Winner said she is praying again. In her idiosyncratic way, she now draws — or more correctly, doodles — a form of prayer she picked up from a book called “Praying in Color.”

“For me, it's helpful because it's not word based,” she said.

A serious bibliophile who devours books and said she wouldn't want to live in a town without a bookstore, Winner is nothing if not writer-ly. Her typical first question at faculty gatherings, is, “What are you reading?”

“If they have nothing to say, I'm out of conversation.”

But she agreed, writing popular books is where her calling lies. “What I do best is this act of translation,” she said, taking religion scholarship and making it accessible to a wider audience.

On a recent Sunday, she turned that act of translation on the congregation at St. Luke's Episcopal Church in Durham, where she preaches about six times a year.

As is her habit lately, she talked of spiritual contradictions, of people devoted to God who nonetheless turn to other idols.

“Our journey to God is pocked with idols,” she said. “And it is suffused with God's peace.”