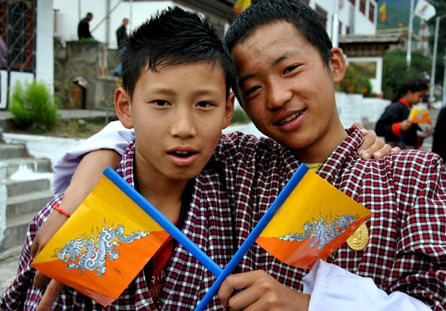 THIMPHU, Bhutan (RNS) In a country that prides itself on measuring quality of life in terms of "Gross National Happiness," this small Buddhist kingdom in the Himalayas seems to have a problem: at least half its citizens aren't happy, according to its own measurements. Two Bhatanese students carry the national flag as they await the arrival of the country's king and queen in the capital city of Thimphu.

While more than 90 percent of the 7,142 respondents said they were "happy" in a recent government survey, only 49 percent of people fit the official definition of total happiness by meeting at least six of the survey's nine criteria.

Bhutan's fourth king, Jigme Singye Wangchuck, coined the phrase GNH in 1972 on the belief that people's happiness did not depend on the nation's economic wealth alone.

Many of the GNH indicators find their roots in Buddhism. Psychological well-being, for example, includes measures of meditation, prayer, nonviolence, and reincarnation.

In the recent survey by the Center for Bhutan Studies, 51 percent of Bhutanese were found to be "not yet happy."

"Most youth of my age are confused, they are living each day as it comes, having no idea about GNH, no idea about religion and customs that have been passed on," said 24-year-old Princess Yiwang Pindarica, a cousin of Bhutan's King Jigme Khesar Namgyel Wangchuck. "I think they say they are happy because they do not dig deep when they say 'yes.'"

"It is well proven that happiness is largely a state of the mind," he said. Thanks to the GNH philosophy, he added, Bhutan had conserved its environment, cultures and traditions despite more than half a century of modernization.

Namgay Zam, an anchor from state-owned broadcaster Bhutan Broadcasting Service, said the government's emphasis on happiness may get the landlocked nation only so far.

"Bhutanese generally are very content people, resigned to their fates due to their belief in karma," she said. "They simply don't ask for more."