NEW ORLEANS (RNS) The Southern Baptist Convention began in 1845 in support of slaveholders and is now poised to elect its first African-American president, the Rev. Fred Luter Jr., in June. 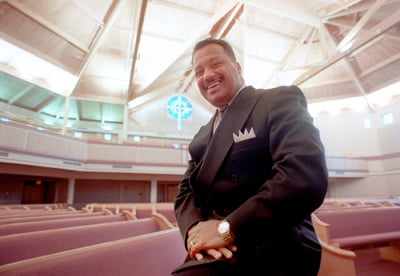 “It's a new day in the Southern Baptist Convention,” Luter told the PBS program Religion & Ethics NewsWeekly. “Our doors are open to each and everybody.”

Luter, 55, has been pastor of Franklin Avenue Baptist Church in New Orleans more than 25 years. Under his leadership, Franklin Avenue has become one of the largest Southern Baptist churches in the state, with nearly 5,000 members. At one time, it was an all-white Southern Baptist congregation. But in the 1970s, whites moved out of the neighborhood, and the congregation became mostly African-American.

A New Orleans native, Luter grew up in a black Baptist denomination. When he arrived at Franklin Avenue in 1986, there was debate about leaving the SBC. Luter convinced the congregation to stay affiliated with the denomination.

Luter is currently the SBC's first African-American first vice president. He is the only declared candidate for president, although additional nominations may be made from the floor of the SBC's annual convention, which will be held June 19-20 in Luter's hometown.

The SBC is about 80 percent white. In recent years, the denomination has adopted resolutions of apology for its previous stands on racial issues.

“I have a past, you have a past, everybody has a past. This convention, unfortunately, has a past that we're trying to move forward from, and that's how I look at it,” Luter said.  “There was apology made, and so it's now time to move on.”

Still, Luter acknowledged that racism is an ongoing issue that needs to be addressed, in the denomination and across the nation. While he doesn't agree with all of President Obama's policies, he has been troubled by what he sees as a lack of respect for the president in many quarters.

“A lot of the things that this president has faced have not necessarily been because of his politics or his decisions, but unfortunately, it's only been because of the color of his skin. And that's what lets me know that we have a long, long way to go in America as far as racial reconciliation,” Luter said.

Tensions over race cannot be ignored, he asserted, citing the Florida shooting of black teenager Trayvon Martin in February by a white neighborhood watch volunteer.

“As long as those kinds of things keep happening … we have to deal with it,” he said, adding, “(there are) even some things maybe within the convention that we need to talk about and address.”

Other leaders within the SBC welcome such a conversation about race.

“I'm not pretending like Fred's election to the convention now is going to do away with all racial tensions in the Southern Baptist Convention … but it is going to be a step, and I think a major step, in the right direction,” said the Rev. David Crosby, pastor of the predominantly white First Baptist Church in New Orleans.

At next month's meeting, Crosby will be the one to officially nominate Luter as president. The two are close friends.

The two pastors' friendship began in the difficult days after Hurricane Katrina. Franklin Avenue had been devastated by the storm. When he returned to survey the damage, Luter said he was overwhelmed.

“We see pews thrown all over, the mud thick, the smell, the stench, I just, I cried like a baby,” he recalled.

The church had to be completely gutted and rebuilt. Most of the 7,000 congregants had fled New Orleans, but the remaining 50 or 60 needed a place to worship. First Baptist, which had sustained much less damage, opened its doors, and the two congregations shared the space for nearly three years.

After years of construction, Franklin Avenue moved back into its rebuilt church in 2008. But the relationships between the pastors and the congregations continue.

If he becomes president of the SBC, Luter said in addition to encouraging the establishment of new churches, one of his goals will be to support local congregations that are struggling to survive.

“We really have to work with a lot of the churches who are already existing but are hurting. They haven't baptized in a while,” he said.  “We need to go into these churches and find out, what can we do as a convention to help you get back on your feet?”

As president, Luter would also help give voice to the SBC's often-conservative positions on public policy issues, such as opposition to abortion and gay marriage.  He said that is something he does not shy away from.

“We've always been out there on the front lines,” he said.  “My mindset and my lifestyle is driven by what the Word of God says. If God says it's wrong, then it's wrong.”

Luter is aware that as the first African-American up for the SBC presidency, he's disproportionately in the spotlight.

“You know whenever you're the first at something you're going to be scrutinized more,” he acknowledged.

And as the convention meeting approaches, Luter said he's praying more than ever for wisdom.

“I'll be speaking on behalf of a denomination of 15 million members. Fifteen million people of over 45,000 churches, and so I want to make sure that I represent not only them well, but most of all I want to represent God well,” he said.

(A version of this story was first broadcast on the PBS television program “Religion & Ethics NewsWeekly”; www.pbs.org/religion)