NEW ORLEANS (RNS) Jerry DeWitt was just a face in the crowd of 325 or so atheists, agnostics, humanists and other nonbelievers gathered here at the recent convention of the American Humanist Association. 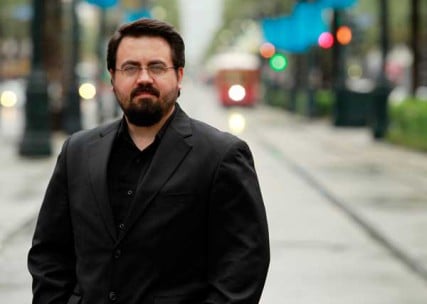 Jerry DeWitt, a former Pentecostal preacher from DeRidder, La., came to be an atheist while still preaching in the pulpit. He’s out now, so to speak, and beginning to gain some prominence in atheism and humanist circles (June 10, 2012).

He didn’t get an award as Humanist of the Year, like Gloria Steinem. Nor is he an author or community activist promoting tolerance for nonbelievers, like many of the association’s better-known figures.

But DeWitt, 42, is beginning to develop a national profile in the small universe of organized unbelievers, for he’s a rarity: a former preacher, an erstwhile Pentecostal pastor from small-town Louisiana who little by little lost his faith right there in the pulpit, even as he exhorted others to fervent belief.

Now DeWitt is out of the pulpit, and public about his nonbelief. He has begun to do a little speaking, telling his reverse-conversion story around the country before local humanist groups. More than that, he is the unpaid executive director of the Recovering from Religion.org and works with The Clergy Project, a website that invites and privately counsels other doubting pastors behind a password-protected firewall.

Atheism is his new ministry. He said he does not personally proselytize for nonbelief, to adopt a term from his former world.

“I don’t consider myself an evangelist at all. But I’m still like a pastor. I pastor people who come to me and pastor them where they are,” said DeWitt, who lives in DeRidder, La. “I life-coach them. I’m pastoring more people now than I ever ministered to before in either of my congregations.”

Whatever lessons DeWitt offers as a life-coach, they are hard-won — and still developing. By DeWitt’s account, his coming out has been disastrous.

DeRidder, population 10,500, is the picture of rural Louisiana. The local economy runs on timber, cattle and paper mills. It is a deeply religious place, where two-thirds of its population report membership in some church, according to the Association of Religion Data Archives.

Several months after leaving his congregation at First Community Church of DeRidder, DeWitt went public with his nonbelief last fall. He spoke to an atheists’ association in Houston, came home and declared his nonbelief on Facebook. “October and November were the worst months of my life,” he said. “I got emails. Calls. People can be extremely vehement over how they feel over my ‘change,’ as they call it.”

DeWitt said he has been unemployed since December. And he said that in the deeply evangelical culture of Beauregard Parish, he feels unemployable.

He said his house is in foreclosure; his marriage is under stress. “My wife is married to the most disliked person in town,” he said.

For years, locals say, DeWitt was publicly known and well-respected as a gregarious, able local preacher with a double public profile: He was not only a pastor, he was also the head of DeRidder’s Community Services Department, a post that frequently brought him before local groups on civic and municipal affairs.

But since his coming out, two friends said, DeWitt has slipped off their radar. His social profile is much lower. They could not confirm whether he is unemployed or unemployable, or in desperate economic or personal straits. The new pastor of DeWitt’s former congregation was not available for comment.

In the United States, not to mention Beauregard Parish, DeWitt’s atheism is certainly the exception. In 2007, a poll by the Pew Forum on Religion & Public Life found that only 5 percent of Americans said they did not believe in God or a universal spirit.

Only about one in six said religion was “not too” or “not at all” important in their lives. Last year, nearly two-thirds of Americans told Pew researchers they would regard an atheist presidential candidate less appealing than someone who’s never held office, an adulterer, a Mormon or gay.

That is the playing field of public disapproval the American Humanist Association tries to level, said Roy Speckhardt, its executive director. “This country has not got past the idea of theism,” he said. “There is this prejudice against nontheists, who assume we cannot be good without God.“

That’s part of the humanists’ agenda, which includes training community leaders to put a nonthreatening face on nonbelief. And Speckhardt said there’s another part: “raising the flag for many, many people who feel as we do, but who haven’t come out.” But Speckhardt and others believe the space for nonbelief is growing, and it’s happening among young adults.

DeWitt describes his own journey as long, lonely and stressful. For years, it required increasing psychic energy to maintain a phony public identity — indeed, to regularly and vigorously preach a worldview he was privately rejecting.

Even early in his career, DeWitt said, there were little seeds of doubt.

First, the concept of hell alongside the idea of a loving God. Later, doubts about the authenticity of the gifts of the Spirit over which he presided: speaking in tongues, healings, prophecy.

Then the authority of the Bible itself, and the way his community used it so literally. Struggling with doubt, DeWitt said he quit the first congregation in nearby DeQuincy, making excuses about his commute, his wife’s health and City Hall duties.

But later a smaller congregation, First Community Church, called him. Hoping for a “personal revival” of faith, he accepted. But he said after a year or so, it was no good. “The constant failure of prayer, of miracles, of prophecy created a heartbreak I was not longer able to ignore,” he said.

Without divulging his secret, DeWitt quit both the pastorate and his City Hall job and went into the private sector, ending a pulpit career of 25 years. One day last year a friend called and asked DeWitt to pray urgently for a family member.

These days, DeWitt said, he is trying to reinvent himself as a speaker on the atheist and humanist circuit, hoping to earn enough to make a modest living. In an earlier life, he would have described it as stepping out in faith.

“But I am determined for this to be my future somehow,” he said. “I’m not excited by the loss of family, friends, favor or finances. But I’m at home traveling. And I’d like to salvage my life. Having gone public and paid such a price, I’d feel it something of a victory for myself and my family.”