WASHINGTON (RNS) The National Association of Evangelicals is urging pastors to seek a common moral ground by uniting under a consistent code of ethics. 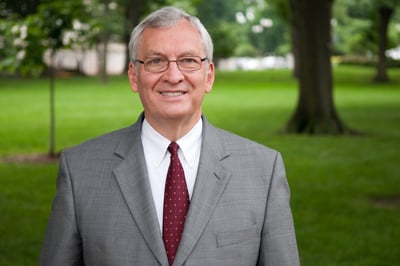 Leith Anderson is president of the National Association of Evangelicals and senior pastor of Wooddale Church in Eden Prairie, Minn.

NAE leaders said the new code [READ THE FULL TEXT BELOW] will provide uniform guidance to church leaders across the 40 denominations that comprise the nation’s largest evangelical group.

The new code is a good starting point for ministers in a profession that can be individualistic and entrepreneurial, said David P. Gushee, a professor of Christian ethics and director of the Center for Theology and Public Life at Mercer University.

“In some ways it’s the Wild West out there in terms of the context of preparation for ministry in the evangelical world,” he said. “Any effort to raise the moral bar and establish a minimal set of expectations for clergy — or any profession — is a very good thing.”

The code puts into writing ethical guidelines that often go unspoken. Specifics include, among other things, sexual “purity,” regular financial auditing, not recruiting members from a pastor’s former congregation, and counseling ethics.

Seven in 10 evangelical leaders are not required by their congregations to sign a formal code of ethics, according to a recent NAE survey. Signing the code will not be required for NAE membership, but NAE President Leith Anderson said it offers a tool for denominations to secure moral leadership.

The code was compiled by a team of ethicists, pastors, and denominational leaders working over an 18-month span. “It’s like writing a book,” Anderson said. “It’s a lot of work to get things correct.”

Issued in English and Spanish, the code covers issues ranging from sexual behavior to resource management and financial integrity to physical health.

Rodriguez lauded the code for holding leaders to a higher standard in a world he says is saturated in materialism and moral relativism.

“You would assume that Christian leaders, of course, would embody the idea of integrity and purity and accountability. This code of ethics is a call to affirm standards to not only live a life above reproach, but to really apply to higher standards than what to society today will deem appropriate,” he said.

Gushee said the next step is to move from a broad framework of principles to specific behavioral guidelines, such as budget oversight and counseling practices. He said these might best be instituted by individual churches.

Anderson said the NAE has already begun its next project – a code of ethics for churches.

NAE Code of Ethics for Pastors