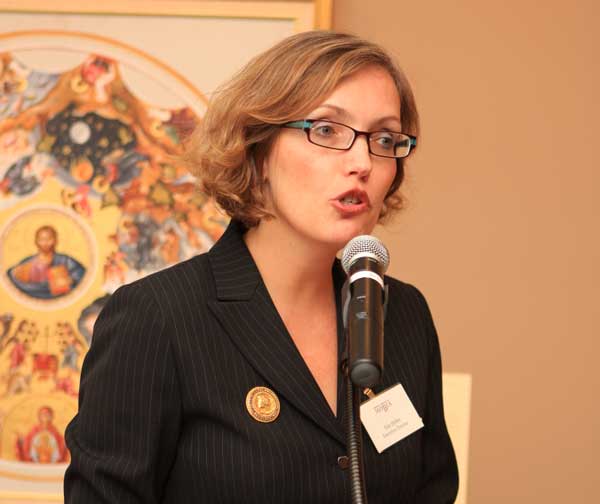 NEW YORK (RNS) When art historian Bruce Boucher wanted to reunite the three panels of a huge 14th-century altarpiece from three different countries, the Italian lender of one of the pieces had one condition: the finished product had to be shown at a big-city museum.

"And of course," said Boucher, director of the University of Virginia Art Museum, "I immediately thought of MOBiA."

It was a high compliment to the small institution in a city that's awash in better-known art museums, and to Ena Heller, the Romanian emigrant with a Ph.D. in art history who has led the Museum of Biblical Art as its founding director for the past 15 years. 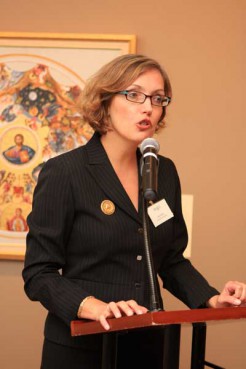 The tiny yet sophisticated Museum of Biblical Art is losing its director, Ena Heller, the Romanian emigrant with a Ph.D. in art history who has led the museum as its founding director for the past 15 years.

The exhibit featuring the triptych, "The Adoration of the Magi by Bartolo di Fredi: A Masterpiece Reconstructed," is the latest in a string of unexpected successes for MOBiA, which has hosted well-received exhibits ranging from a collection of Peruvian folk art to masterpieces by Marc Chagall to a recent collection of wartime Bibles.

Now, however, the future of one of the smaller and more eccentric pearls in the city's cultural crown looks less certain as Heller steps down in July, its main financial lifeline gets cut in 2015 and the museum is dogged by rumors that it will lose its $1-a-year lease on Broadway near Lincoln Center.

It's the museum equivalent of the classic lost-my-job, lost-my-girlfriend, lost-my-lease trifecta. And it complicates the museum's trustees’ task of preserving a vision that didn’t exist 20 years ago, but that now seems indispensable to many.

MOBiA is unlike most big-city museums in its exclusive focus on Christian and Jewish religious art -- but also its attention to that art’s religiousness. The museum had no religious agenda per se – which is ironic since it started as part of the venerable American Bible Society.

“Most secular museums are uncomfortable with faith and prefer to treat religious subjects aesthetically or in terms of art history, not as a vehicle for awe," said Gary Vikan, director of the Walters Art Museum in Baltimore. "Ena’s position—presenting the art as a spiritual thing, but doing it with a secular rigor, takes guts."

The museum is a unique institution: the agnostic offspring of a missionary organization, founded in 1997 when the Bible Society decided to capitalize on its prime real estate with a gallery. It recruited Heller and accepted her main proviso: that the gallery operate free of any faith identification.

(May 2012) Museum of Biblical Art's exhibition, "Finding Comfort in Difficult Times: A Selection of Soldiers' Bibles," is American religious history come alive. An inscription inside a bible - 1862.

Historically, "we’ve been involved in Bible distribution and translation.  But with an average of 4.3 Bibles per American household, we are now working to increase engagement with the Bible outside of the home or church," said ABS spokesman Geof Morin. "A secular-friendly Bible museum was an opportunity to do that."

Heller understood the arrangement more in terms of academic objectivity. In 2004, the museum registered as a nonreligious nonprofit. Heller enlisted a board of opinionated Christian and Jewish members -- among them Roberta Ahmanson, the monied patroness and Christian culture warrior, and Tom Freudenheim, former head of the YIVO Institute for Jewish Research.

The result was unique in New York, and possibly nationally. Heller’s presentations can be so religiously resonant that at one show, a visitor had to be discouraged from lighting a votive candle. Yet they also express what Freudenheim calls “an investigative sensibility,” roaming freely across faith and denominational lines, such as a Chagall show that featured the Jewish artist’s use of crucifixes.

"The Metropolitan Museum is four blocks long. You can see colonial furniture at one end, a Madonna at the other and a shiny dog on the roof," Vikan said. "When all you've got is religious art, it's a different kind of statement.”

The museum also proved its ability to curate well above its weight-class, borrowing major pieces from institutions around the world when many museums, rocked by the recession, were recycling their permanent collections to avoid heavy insurance fees on loaners.

The museum gained notice in The New York Times and the Wall Street Journal, and MOBiA curators popped up on New York Public Radio. In 2010, Heller won the American Academy of Religion’s Religion and the Arts award. "I think Ena provided a way to rethink the past," said S. Brent Plate, head of the AAR jury.

So why is Heller leaving? "I want to run another museum," she said, preferably one with its own permanent collection. She also has little appetite for the fundraising challenges that will arise when the Bible Society shrinks its contribution to the museum's budget from around 50 percent currently to zero in 2015. The drawdown was planned and mutually agreed upon.

The challenges would get only more intense if the ABS decided to sell its property. Morin, the spokesman, insists that "we are not entertaining offers on the building and it is not our desire that MOBiA leave. The only question for them is, do they want physical independence to maintain their credibility?”

MOBiA trustees have mused about moving the museum to a less pricey locale if  need be.

Trustees remain remarkably confident about the museum’s general prospects, noting that they've grown non-ABS funding 15 percent a year since 2006 despite a devastating recession.

"We'll be able to sustain this distinct identity we've established, even with Ena's departure," said trustee Brian O'Neil, whose day job is overseeing the endowment of the enormous Robert Wood Johnson Foundation.

Heller agrees. She has front-loaded the next two years of exhibits as Freudenheim leads the search for her successor. There's a "greater openness for the kind of thing we've been doing," she said, and there's someone out there who can continue the museum's unlikely strong run.

"I wouldn't leave if the museum were in crisis," she adds, with the same serene confidence that helped create and sustain it. "It's my baby."