(RNS) The long-smoldering debate at the U.S. Air Force Academy over the role of religion in cadets' lives has reignited, just as a new class arrives on campus for basic training.

Accusations of improper proselytizing on the Colorado Springs, Colo., campus have been challenged by those who argue that AFA guidelines curtail religious expression. 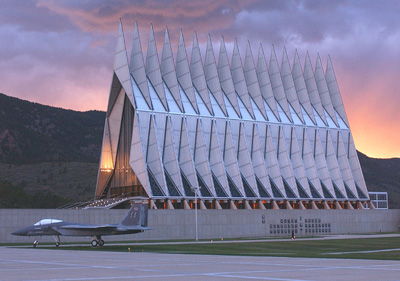 (2005) Conjuring images of fighter jets aimed skyward, the chapel at the Air Force
Academy in Colorado Springs, Colo., has been hailed as an example of expressionist modern architecture.

In response to allegations of proselytizing, Schwarz mandated that only chaplains could endorse religious programs.

But the congressional letter argues that the new policy goes too far.

“While we agree that leaders should not use their positions to impose their religious beliefs or extend preferential treatment to those who share their beliefs, the decisions that have been made in reliance upon this policy go beyond what is required by the U.S. Constitution,” the letter reads.

“There’s nothing wrong with a commander attending, even publicizing and encouraging … a good and positive event for the morale and the welfare of military personnel,” said executive director and retired Col. Ron Crews, a former chaplain with 28 years of military experience.

“There’s nothing wrong with a commander saying, ‘This is an event that I support and I am going to.’ You’re encouraged to go, but you are not ordered to go,” he said.

But David Mullin, a former AFA economics professor, said military culture muddies the distinction between encouragement and orders, so only chaplains should speak on religious matters.

“When a military commander says ‘you are encouraged to attend,’ whether it is to military officers or civilians, that is an effective order,” Mullin said. This constitutes improper proselytism, he added.

A self-described evangelical, Mullin is one of the few to openly criticize what he calls an unhealthy religious climate in the AFA. He is represented in court by the Military Religious Freedom Foundation, a legal watchdog.

Mullin was one of five academy professors who sued unsuccessfully in January 2011 to stop a school prayer luncheon that would feature as keynote speaker a veteran who calls himself a “U.S. Marine for Christ.”

He alleges his dog was poisoned after he protested about the school's religious climate later that year.

Mullin suggests part of the problem stems from the AFA's Colorado Springs location. The city hosts many evangelical parachurch organizations, such as James Dobson’s Focus on the Family, as well as New Life Church, an evangelical church founded by its former pastor Ted Haggard.

He added that some of these groups have access to the academy, including cards that get them into dorms.

“You have very strong encouragement -- basically carte blanche access to cadets by the leadership of the academy by these groups,” Mullin said. “It is corruption, and there is substantial religious discrimination as part of this corruption,” he said.

The AFA has long struggled with setting boundaries for religious expression.

In 2004 a team of Yale Divinity School students and professors found “challenges to pluralism” at the academy. A memo expressed “concern that the overwhelmingly evangelical tone of general Protestant worship encouraged religious divisions rather than fostering understanding among basic cadets.”

An internal AFA investigative panel in 2005 found religious “insensitivity,” but not “overt religious discrimination.”

Still, the Air Force that year issued guidelines that banned some public prayers and discouraged public discussion of religious belief by commanders and enlisted personnel. A 2006 revision relaxed the guidelines somewhat by allowing personal religious discussions that are not coercive.

A 2010 survey found 41 percent of non-Christian cadets faced unwanted proselytizing, even as the religious majority felt that their freedom of speech was being infringed upon.

This is bad for cadets and bad for the country, says Mikey Weinstein, a 1977 academy graduate and founder of MRFF.

The congressional letter, he said, is part of a larger cultural battle to hold personal Christian rights over civil rights. “It’s just another example of the level of stupidity and unbridled fundamentalist Christian cancer,” he said.

MRFF has 362 clients at the AFA, triple those at the Army and Navy academies, according to Weinstein. He claims 35 families from the incoming class have already contacted him, though no suits have been filed.

Crews said Weinstein’s message is misguided, and that the Constitution protects the right to evangelize in ways that are not belligerent or coercive.

“As I understand, Mikey Weinstein’s interpretation of the First Amendment is that we have freedom from religion instead of freedom of religion.” Crews said. “Just because someone puts on the uniform does not mean that they give up their God-given, constitutionally protected religious liberties."