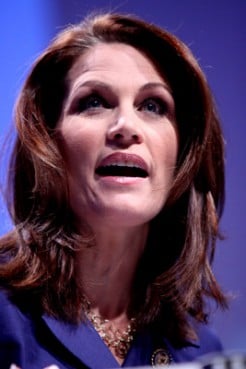 Bachmann and four other GOP legislators have sent letters to five government agencies citing “serious security concerns” about what Bachmann has called a “deep penetration in the halls of our United States government” by the Muslim Brotherhood.

Sen. John McCain, R-Ariz., defended Abedin. “These attacks on Huma have no logic, no basis and no merit, and they need to stop now,” he said in a Senate speech on Wednesday (July 18).

Bachmann's letters cite a report by Frank Gaffney, a conservative who has accused President Obama of “embracing the agenda of the Muslim Brotherhood.”

Gaffney has also argued that most U.S. mosques have been radicalized by Islamists, a claim that government terrorism officials have called “inaccurate and counterproductive,” according to The Washington Post.

The Muslim Brotherhood is an Islamist political movement founded in Egypt in 1928 with branches in several other Arab states.

The Bachmann letters “asking for investigations of American Muslims are cause for concern and give an undeserved and harmful platform to fringe accusations,” said Christina Warner, director of the interfaith organization Shoulder-to-Shoulder.

Rabbi David Saperstein, director of the Religious Action Center of Reform Judaism, said that Bachmann's accusations “reflect a general pattern of Islamophobia that touches too many areas of our society.”

“Allegations such as these by members of Congress add legitimacy to this distressing trend,” Saperstein said.

Rep. Keith Ellison, D-Minn., a Muslim, suggested that Bachmann was using the accusations for political gain and asked for evidence to back her claims.

“Your response simply rehashes claims that have existed for years on anti-Muslim websites and contains no reliable information that the Muslim Brotherhood has infiltrated the U.S. government,” Ellison wrote in a letter to Bachmann.

News
Poll: Muslim American support for Trump rises, but most plan to vote for Biden
News
Normally a refuge on campus, college Muslim groups fight students’ isolation in a pandemic
News
What’s behind the ‘Cuties’ outrage?
News
Muslim woman sues Los Angeles Police Department for forcibly removing her hijab
News
Activists to hold protest rally after reports of ICE officials forcing Muslim detainees to eat pork
© Copyright 2020, Religion News Service. All rights reserved. Use of and/or registration on any portion of this site constitutes acceptance of our User Agreement and Privacy Policy, Privacy Statement and Cookie Notice. The material on this site may not be reproduced, distributed, transmitted, cached or otherwise used, except with the prior written permission of Religion News Service.