This article has moved — bookmark the new URL <!–

“I liked the idea,” she explained, “of giving parents the option of sending their children to a public school or a Christian school.” 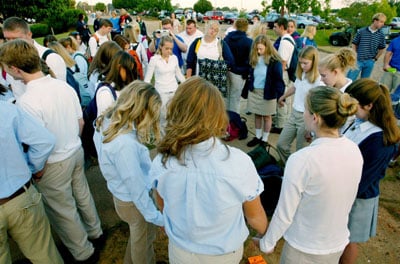 Students join hands as they pray in groups around the flagpole at Baker High
School in Mobile, Ala., on Wednesday (Sept. 17, 2003). The annual “See You at the Pole” observance is
just one example of the intersection of religion and public schools across the country.

Hodges got a First Amendment reality check when she discovered that Christian schools wouldn’t be the only religious schools getting tax dollars.

“Unfortunately, it (vouchers) will not be limited to the Founders’ religion,” she said in June. “We need to ensure that it does not open the door to fund radical Islam schools. There are a thousand Muslim schools that have sprung up recently. I do not support using public funds for teaching Islam anywhere here in Louisiana.”

Although Gov. Bobby Jindal’s voucher plan passed last month without her support, Hodges vowed to keep looking for alternative ways to “support funding for teaching the fundamentals of America’s Founding Fathers’ religion, which is Christianity, in public schools or private schools.”

Beyond the fact that some of the Founders were not Christian, Hodges appears confused – to put it mildly – about the implications of the First Amendment’s guarantee of religious freedom for all, including American Muslims.

She is not alone.

State Sen. Kevin Grantham of Colorado has worried out loud about the proliferation of mosques in America. Fresh from hearing an anti-mosque speech by Dutch parliamentarian Geert Wilders (outspoken opponent of all things Islamic), Grantham said recently that “mosques are not churches like we would think of churches.”

In an apparent attempt to remove mosques from the First Amendment protection afforded Christian churches, Grantham claimed that Muslims “think of mosques as a foothold into a society, as a foothold into a community, more in the cultural and in the nationalistic sense. Our churches – we don’t feel that way, they’re places of worship, and mosques are simply not that.”

Beyond the fact that mosques are indeed places of worship, Grantham also appears confused about the meaning of religious freedom in America.

Hodges and Grantham speak for those Americans of the majority faith who are anxious about the changing religious landscape of America – and what it means for the nation’s future. It’s the same anxiety that fuels campaigns to post the Ten Commandments on schoolhouse walls or to pray the Lord’s Prayer at city council meetings. What Hodges calls “the Founders’ religion” is still viewed by many Christians as America’s official faith.

Attempts to favor one faith – historically Protestant Christianity – over others in the public square are doomed to fail in the new religious America of the 21st century. But that won’t stop many in the majority from trying. 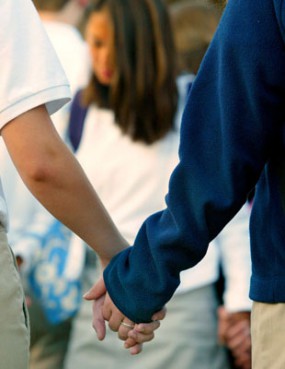 Students pray in groups around the flagpole at Baker High School in Mobile,
Ala., on Wednesday (Sept. 17, 2003). The annual “See You at the Pole” observance is just one example of the intersection of religion and public schools across the country.

From the 17th-century Puritan determination to enforce religious conformity in Massachusetts Bay Colony to the 19th-century campaign to prevent the spread of Roman Catholicism, those in the majority have often feared, opposed and sometimes persecuted the “strangers in the midst of the saints,” as the Puritans might put it.

Now, once again, changing demographics are pushing Americans, sometimes kicking and screaming, toward full religious freedom. Lest we forget, the emergence of dissenting religious groups such as Baptists and Presbyterians in the Colonial period eventually provided the ground troops that won the battle for disestablishment of the Anglican Church in Virginia in 1786. And waves of immigration in the 19th and early 20th centuries gave power in numbers to Roman Catholics, Jews and others seeking an equal place at the American table.

Today, the last vestiges of Protestant domination are disappearing as America moves rapidly toward a minority-majority country in both religion and race. Demographers tell us that soon the number of Americans identifying as “Protestant” (51 percent in 2004) will fall below 50 percent of the population for the first time in our history.

This is bad news for those who cling to their version of a “Christian America” where one faith (theirs) receives school vouchers, zoning permits and other benefits and protections, while other faiths are barely tolerated to be here.

James Madison hit the mark when he argued that “freedom arises from the multiplicity of sects, which pervades America and which is the best and only security for religious liberty in any society. For where there is such a variety of sects, there cannot be a majority of any one sect to oppress and persecute the rest.”

(Charles C. Haynes is director of the Religious Freedom Education Project at the Newseum in Washington, D.C.)

Religion Hub
Mufti’s talk of women’s duties angers some Turkish Cypriots
Follow us on Facebook!
Submit your photos to RNS