(Columbia, Mo.) — ColumbiaFAVS.com, a community online news publication that covers faith and values news for Columbia and mid-Missouri, is officially open for business.

In addition to engaging religion reports and dialogue, ColumbiaFAVS also provide tools to help community members explore beliefs within and outside their traditions, including:

ColumbiaFAVS.com is the third website in a three-year initiative of Religion News LLC, the parent company of Religion News Service, to create local religion news sites in the U.S. where faith coverage is underreported or could be expanded. The sites cover beliefs, ethics and ideas from a non-sectarian viewpoint and feature daily news and opinion content from professional and citizen journalists. Its partners are the national Religion News Service, SpokaneFAVS.com, WilmingtonFAVS.com and local NPR station KBIA-91.3 FM.

RNLLC and RNS are headquartered at the University of Missouri’s School of Journalism. The community news sites are part of a $3.5 million grant from the Lilly Endowment. 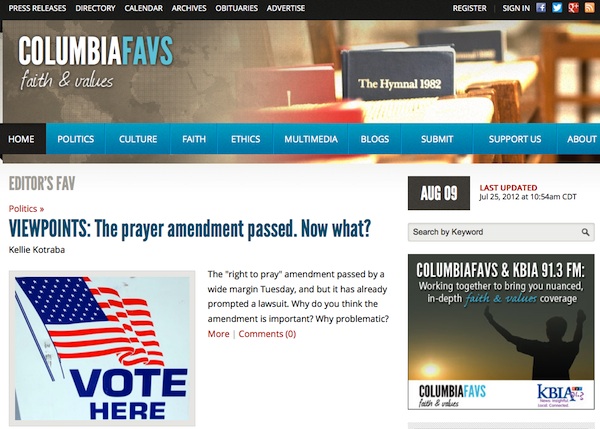