WASHINGTON (RNS) Nearly all Muslims can agree on the basic beliefs of Islam: There is one God, Muhammad is God’s prophet, Muslims should fast during the holy month of Ramadan and give alms to the poor. 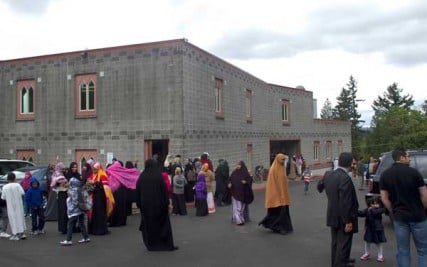 Portland, Ore.‘s largest mosque, the Islamic Center of Portland, Masjed As-Saber, draws worshipers from all corners of the world as well as from the US. Many who pray there talk of a worsening political climate rooted in misunderstandings of Islam.

Yet beyond these central pillars of the faith, Muslims worldwide vastly differ as religious convictions are shaped by cultural and social contexts, according to a new report by the Pew Forum on Religion & Public Life.

“The World’s Muslims: Unity and Diversity” draws on 38,000 face-to-face interviews in 39 countries, and finds that Muslims differ sharply over questions of faith like who counts as a Muslim and what spiritual practices are acceptable.

With 1.6 billion adherents, Islam is the world’s second-largest religion, behind Christianity, and accounts for one-quarter of the world’s population.

“There isn’t one single Muslim world. There are many Muslims around the world that share beliefs, but there are differences as well,” said James Bell, director of international survey research at the Pew Forum.

Though broad, the report is not comprehensive. “Political sensitivities” and “security concerns” kept researchers out of some countries with significant Muslim populations, including China, India, Iran, Saudi Arabia and Syria.

Muslims are united by the “shahada,” the declaration of faith that there is only one God and Muhammad is his messenger, as well as specific religious practices and belief in angels, Judgment Day, and fate.

But they differ significantly by country and region in levels of religious commitment, openness to multiple interpretations of faith and the Sunni/Shia divide.

For instance, 95 percent of Muslims in sub-Saharan Africa said religion is “very important” to them. Solid majorities agreed in the Middle East, North Africa and the United States.

Meanwhile, the atheist strain within communism continues to reverberate through former Soviet states like Russia and Kazakhstan, where much lower percentages of people (44 percent and 18 percent, respectively) say religion is “very important.”

Generally, men and women worldwide held similar religious commitments. However, they differed greatly in mosque attendance, especially in Central Asia and South Asia, which is probably due to local or cultural norms, Bell said.

Sectarian differences were divisive in some countries. In most predominantly Sunni countries throughout the Middle East and North Africa – like Egypt and Morocco – half or fewer of Sunnis accept Shiites as fellow Muslims.

But in nations where large populations of Sunnis and Shiites live side by side – like Iraq and Lebanon – majorities of Sunnis recognize Shiites as fellow Muslims. Outside of this area, sectarian affiliation doesn’t matter as much; one in four Muslims polled do not identify as Sunni or Shia.

The report also found a striking difference between Muslims worldwide and U.S. Muslims. Basic practices like daily prayer and weekly mosque attendance, as well as the importance of religion in daily life, were lower for American Muslims.

Americans also showed a greater acceptance of denominational differences. Whereas 63 percent of Muslims worldwide believe Islam has only one interpretation, only 37 percent of American Muslims believe this.

News
Indian court acquits bishop of charge of raping nun
Follow us on Facebook!
Submit your photos to RNS