WASHINGTON (RNS) One year after an earthquake caused extensive damage to the Washington National Cathedral, church officials received a large gift to help restore the structure.

The $5 million grant comes from the Lilly Endowment Inc., a philanthropic organization.

The announcement came on Thursday (Aug. 23) amid observances for the one-year anniversary of the quake. The ceremony was marked by pealing of bells at 1:53 p.m., the moment the quake hit. Afterwards, a newly carved crocket stone — an ornamental carving of foliage that acts as a rainspout — was blessed and placed on the damaged southwest pinnacle of the 330-foot tall central tower.

Standing 676 feet above sea level, the tower is the highest point in the nation’s capital. 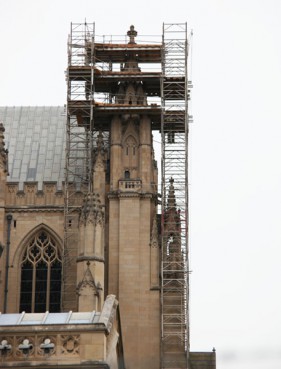 Though workers have spent the past year stabilizing structures and assessing damage, organizers said the anniversary marked the first significant exterior restoration.

“Eli Lilly, one of the endowment’s founders, and his wife Ruth were devoted to the National Cathedral and provided major support for the cathedral’s northwest St. Peter Tower decades ago,” she said.

The announcement also marked the end of a smaller restoration fundraising campaign. As of Thursday afternoon, it had raised over $84,000 of its $100,000 goal.

“While we are overwhelmed by the generosity we have received, we know that we face a significant challenge in raising all the funding we will need for complete restoration and overall long-term preservation,” he said.

The 5.8-magnitude quake was centered around Mineral, Va., and was felt as far north as Canada and as far west as Chicago. It caused all four pinnacles on the cathedral’s central tower to rotate and weaken.

Artistic flourishes like finials, angels and gargoyles were damaged, and the lead roof was punctured by falling stone. Cracks were found in some of the more than 40 flying buttresses that support the cathedral walls.

Worship services were interrupted for eight weeks after the quake as essential repairs were made.

The National Cathedral was centuries in the making.

But the foundation stone was not laid until September 29, 1907, kicking off Washington, D.C.’s longest-running construction project. It was completed exactly 83 years later on September 29, 1990. The $65 million to build the cathedral was raised through private donations.

The building is constructed of Indiana limestone blocks held together with mortar and reinforced by solid stone flying buttresses.

The earthquake damaged the cathedral’s stone structure, but not its supporters’ resolve, Wade said.

“The cathedral’s mission has remained intact … and that is to serve as the spiritual home of the nation.”

News
Study: Biden still leads among Latino Christian voters, but Trump’s support has grown
Martini Judaism
COVID has led us all into sin
Opinion
We need to declare a national emergency on deadly policing
News
Eric Metaxas confirms he punched protester, says protester was to blame
Opinion
Abraham would be proud
© Copyright 2020, Religion News Service. All rights reserved. Use of and/or registration on any portion of this site constitutes acceptance of our User Agreement and Privacy Policy, Privacy Statement and Cookie Notice. The material on this site may not be reproduced, distributed, transmitted, cached or otherwise used, except with the prior written permission of Religion News Service.