INDEPENDENCE, Mo. (RNS) In 1831, Mormon founder Joseph Smith declared that the righteous would gather in Independence, Mo., to greet the Second Coming of Jesus Christ — just one of the prophecies that estranged his faith from traditional Christianity. 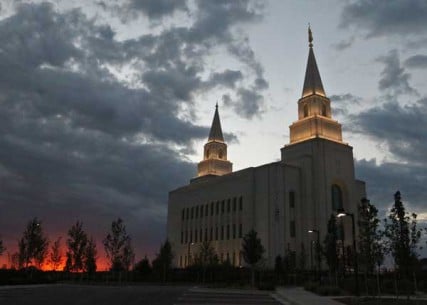 Storm clouds roll over the Kansas City, Missouri Temple of the Church of Jesus Christ of Latter-Day Saints Saturday evening, August 18, 2012. The Temple was dedicated on May 6, 2012.

Thousands of converted Mormons moved from Ohio and upstate New York to claim their New Jerusalem. Disputes with Missourians led to a bloody Mormon War that ended only when the state’s governor issued an “extermination order” to expel Smith’s followers.

Today, few places are better to contemplate the evolving — but still uncertain — relationship between Mormonism and the country where it was founded.

On the one hand, Missouri symbolizes how far Mormons have come. At least 66,000 Mormons now live in the state, more than triple the number of just three decades ago. Most recently, the LDS church has built a temple in Kansas City, Mo., near the epicenter of the Mormon War.

But Missouri also serves to highlight the intractable differences between mainstream Christianity and Mormon theology. 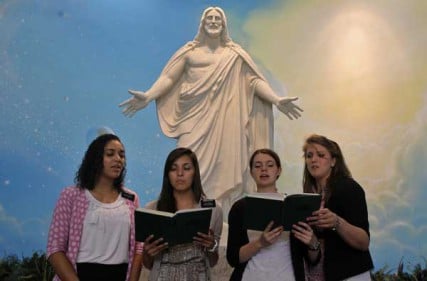 One of the mission assignments of the LDS church is to work in the Independence Visitor’s Center in Independence, Mo. From left: Sister Lettig, Sister Minall, Sister Bingham and Sister Richardson sing to visitors after they take a tour of the center on Sunday, August 19, 2012.

Independence and other nearby sites in western Missouri — including a pasture 70 miles north that Smith tied to the Garden of Eden — serve to emphasize distinctive Mormon beliefs. Those differences are amplified by Mormon scriptures, doctrines and the abandoned practice of polygamy.

A poll by the Pew Forum on Religion & Public Life found that half of non-Mormons do not consider Mormons Christian and when asked to describe the faith in one word, the most common response was “cult.”

That tension of a faith still on the edges of acceptance and yet growing in popularity has surfaced with the nomination of Mitt Romney as the Republican candidate for president. It has been highlighted further by the popularity of the Broadway musical “The Book of Mormon,” which pokes fun at elements of the faith.

All the attention has added up to what has been dubbed the “Mormon moment.” And many Mormons have greeted it with a measure of ambivalence. A January Pew poll reinforces that anxiety, with two-thirds of Mormons saying they don’t believe they are accepted as part of mainstream society.

“I think some people have a sense of anxiety, and maybe a little hesitancy to speak up and share right now,” said Ben Munson, a Lake Saint Louis resident who serves on the church’s regional public affairs council. “But there are others who look at this moment as a huge opportunity to share the gospel with a co-worker or a friend.”

Smith sought not merely to reform Christianity, but to rebuild the early Christian church, with new apostles and priesthood authority. He claimed not only to have seen God and Jesus in a vision as a young boy, but also to have been given gold plates from an angel, from which he published the Book of Mormon.

A year after completing the Book of Mormon, Smith said God had told him a “New Jerusalem, a land of peace, a city of refuge, a place of safety for the saints” would be built in Jackson County, Mo.

The revelations declared that a temple would be built on a lot in Independence, 10 miles east of Kansas City, and would be the site of a gathering for the Second Coming of Jesus Christ.

The boldness of those claims invited conflict with Missouri settlers. Mormons who settled in Jackson County were soon pushed out. And when a plan to relocate Mormons to newly formed Caldwell County also ended in conflict, Gov. Lilburn Boggs ordered all Mormons out — leaving their sacred sites behind.

Since then, the vividness of Smith’s prophecy about a gathering and temple in Independence has faded.

“Today neither Missouri nor the temple lot there figure prominently in the consciousness of the average Mormon,” said Terryl Givens, a Mormon and professor of religion and literature at the University of Richmond in Virginia. “Most Mormons probably don’t even know the particulars of Smith’s teachings on the subject.”

Modern Mormonism should be defined not by unusual Missouri prophecies, Givens said, but by core doctrines. And many Mormons focus on what’s common between their faith and mainstream Christianity. They worship Jesus Christ, and take weekly sacraments in his name. They host potluck dinners and youth socials.

“Outsiders’ fantasies of what Mormons do in worship services are much more exciting than the truth,” said Laurie Maffly-Kipp, a non-Mormon scholar of the faith and chairwoman of the University of North Carolina’s religion department. “When I send my students to a sacrament service, they usually come back talking about how boring it was.”

But that’s not to say that prophecies about Missouri and the historic sites tied to them have been stripped of spiritual significance.

On a recent afternoon, financial planner Tom Springer, 39, and his wife, Olivia Hood, 34, a piano teacher, both from Fort Worth, Texas, stopped for a picnic at Far West, Mo. — a site Smith had designated for a temple.

The couple were crossing the country to visit family, and they stopped at a few Mormon sites to teach their children about the history of their church and to connect with the suffering and fortitude of that first generation of saints.

The couple said that while they believe in the prophecies of their faith — including a gathering of Mormons in Missouri during the last days — some of those teachings don’t fit in their daily lives.

“We believe those revelations from the prophet as central to the restored church, and we take them extremely seriously,” Springer said.

“When God tells me to move my family to Independence, I’ll move them,” Hood said. “But right now, we like Fort Worth. We’re not going to put our house on the market just yet.”

The plot of land in Independence that Smith said would be the site of Zion’s great temple is a vacant lot, owned and safeguarded by a tiny LDS offshoot. But various sects with ties to Mormonism still revere the land’s significance.

The 250,000-member Community of Christ, for example, has built a glistening conch-shaped temple across the street from Smith’s designated temple site.

The larger LDS church maintains its visitor center across the street, where missionaries conduct tours and show movies that tell the story of the early Mormon pioneers.

For Jeremiah Morgan the call to Zion’s soil is tilled deep into his genealogy. Morgan’s ancestors were Joseph Smith’s neighbors in Nauvoo, Ill., where Mormons congregated after their expulsion from Missouri. Smith was killed there, and soon after that, Brigham Young led the saints to Utah. But Morgan’s relatives remained in the Midwest and joined a reorganized LDS group that had rejected Young’s leadership.

When Morgan was a child, his mother moved her family to Independence to prepare for the gathering at Zion.

Morgan, 41, has since joined the larger LDS church and is now a stake president, one of the highest church officers in the Kansas City region.

If the early saints viewed western Missouri as a final gathering place, modern Mormons tend to think of Zion more metaphorically, as a state of spiritual being. Today’s saints are more focused on constancy, on sticking around suburban subdivisions across the nation and driving minivans packed with children to small congregations.

“The prophet said to make Zion wherever you are,” Morgan said. “Zion is people.”

And this May, Mormons in the Kansas City region, who now number nearly 30,000, gathered to dedicate a gleaming white, double-spired temple. It was built not on the sacred plots designated by Smith, but off an interstate, just three miles west of a jail that once held Smith for four months.

Speeches during the dedication service made reference to western Missouri’s unhappy place in church history, but also emphasized healing rather than pain.

The temple, Morgan said, represents “how far we’ve come as a people and as a nation.”