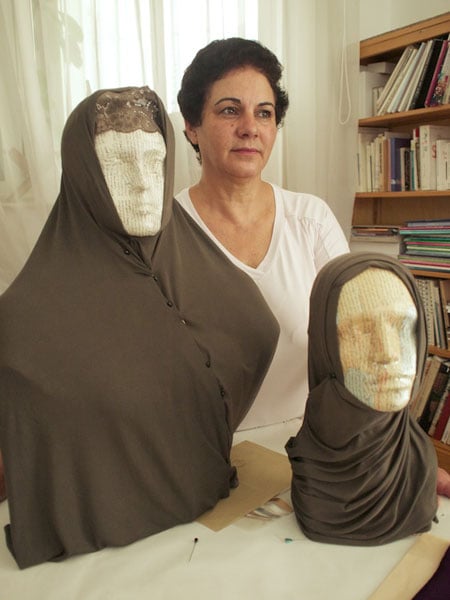 Veiled and surrounded by stones, the busts of three women were attacked by Salafists last June for being religiously offensive. The Tunis-area exhibition that displayed them was hastily shuttered. 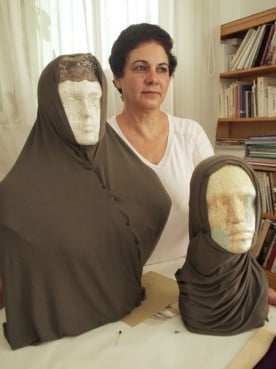 "I wanted people to interpret my art for themselves," Nadia Jelassi said at her studio, where sunlight bathed two of the figures she managed to salvage. Veiled and surrounded by stones, the busts of three women were attacked by Salafists last June for being religiously offensive. *Note: this image is not available to download.

"I wanted people to interpret my art for themselves," Jelassi said at her studio, where sunlight bathed two of the figures she managed to salvage. "But the most obvious interpretation is of lapidation."

Islamist extremists have since posted photos of Jelassi and several other Tunisian artists on their websites, calling for their death. Then the courts waded into the controversy. Today, she is under investigation for "disturbing public order and morals." If found guilty, she could face prison.

Jelassi's is not an isolated case. Increasingly, critics say, free expression — a cornerstone of Tunisia's 2011 revolution that kicked off the Arab Spring — is now under attack. A string of incidents have fueled an intense debate about the role of religion, artistic expression and women's rights in this once staunchly secular North African country.

"The question of what is religiously sacred was never discussed during the revolution," Jelassi said. "People were calling for liberty, dignity, not sacredness."

The matter of "sacredness" is being championed by hard-line Islamists, who are taking their message to the streets. Like elsewhere in the Muslim world, Tunisia was rocked recently by protests over an amateur U.S. movie that mocked Islam's Prophet Muhammad.

Religious hard-liners have also attacked other films and plays here, along with a tourist hotel serving alcohol. 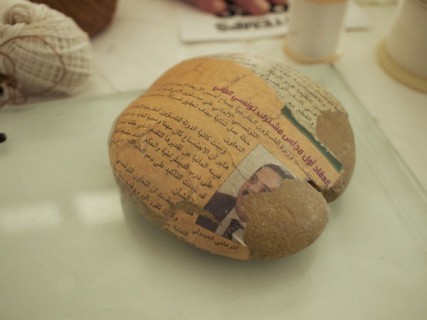 "Certain groups and political parties are trying to take away what we fought for," said Mokhtar Trifi, a senior member of the Tunisian League for Human Rights. "Especially jihadist Salafists movements. They want to impose a form of rigorous Islam that our society has never experienced."

Equally worrying, rights advocates and artists say, is the reaction by the government.

In May, the owner of Tunisia's private Nessma TV channel was fined for broadcasting a movie that ostensibly offended Islam; earlier in the year two bloggers received prison sentences on the same grounds. The courts have also imposed fines for drinking in public and other behavior considered morally lax.

Critics complain the government does little to rein in religious extremists. And more broadly, they fear the ruling Islamist Ennahda party will capitalize on the religious divisions — and elections expected next year — to pass a law to criminalize blasphemy.

"They want to show they're the defenders of Islam, but I say it's for electoral gains," Trifi said. "The aim is to limit liberties in the name of what is 'sacred.' But nobody can define this in a way that is precise and clear."

"We are for free expression and creativity — but also respect of others' beliefs within society," he said in a recent interview.

"There are thousands of artistic works critical of Islam that aren't attacked because they are by serious academics," Ghannouchi added. By contrast, he said, works by Jelassi and other artists at the June exhibition amounted to "a deliberate provocation."

For some in this fledgling democracy, Ghannouchi's position has struck a chord. Tunisia's last two strongman leaders — who together ruled the country for more than half a century — cracked down on human rights, even as they sealed strong ties with the West.

"Ennahda has helped give us liberty," Ben Jemaa said, touching her pink hijab as she strolled down Tunis' tree-lined Habib Bourguiba Avenue. "Today, I am free to wear this hijab. I don't have problems with the police or at school."

But critics claim Islamists are pressing many other women to conform to their views. On the streets of the capital, hijabs and the face-covering niqab are more common than just a year ago.

"I have no figures, I have no scientific studies," said Khadija Cherif, Tunis-based secretary-general of the International Federation of Human Rights. "But the assessment I make daily is that the vast majority of women are veiling because of pressure from their family or neighborhood or political manipulation."

In a separate campaign, rights advocates are pushing to scrap a clause in Tunisia's draft constitution that describes women as "complementary" but not equal to men. Jelassi views the two pieces of draft legislation, on blasphemy and on women's rights, as twin fronts in the same battle.

"There's a deliberate effort to roll back our gains," Jelassi said. "It's very worrying."

"I'm obliged to become politically active and defend free expression. If not, what we have achieved from the revolution will disappear."