SALT LAKE CITY (RNS) Call it a change for the ages.

In a surprising move that promises to transform Mormon social and spiritual dynamics, the Church of Jesus Christ of Latter-day Saints on Saturday (Oct. 6) announced that it is lowering the age of full-time missionary service to age 18 for men (down from 19) and 19 for women (down from 21). 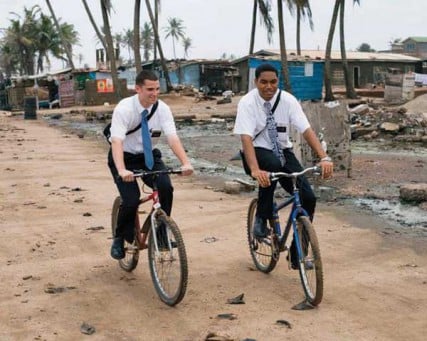 Mormon Missionaries — The Church’s missionary program is one of its most recognized characteristics. Mormon missionaries can be seen on the streets of hundreds of major cities in the world as well as in thousands of smaller communities.

“The Lord is hastening this work,” LDS apostle Jeffrey R. Holland said at a news conference, “and he needs more and more willing missionaries.”

The church is counting on this change to dramatically increase the ranks of its full-time missionaries, currently more than 58,000 worldwide.

It will also bring sweeping changes to an array of areas — from university sports recruiting to college admissions, family finances to dating and marriage patterns, missionary preparation and training to career planning.

It also might help the LDS church hold on to its young people, a number of whom leave the faith once they hit college. Perhaps the most significant impact will be on Mormon women.

“I am overjoyed,” LDS writer and religion scholar Joanna Brooks said through tears. “This changes the narrative for young Mormon women in pretty fundamental ways. It uncouples church service from the expectation of marriage and motherhood, and teaches young women they should take responsibility for knowing their faith.” 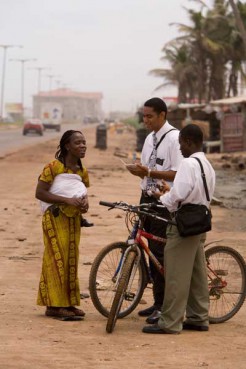 In a surprising move that promises to transform Mormon social and spiritual dynamics, the Church of Jesus Christ of Latter-day Saints on Saturday (Oct. 6) announced that it is lowering the age of full-time missionary service to age 18 for men (down from 19) and 19 for women (down from 21).

Brooks, author of “The Book of Mormon Girl,” said she would have gone on a mission at age 19.

“It will change the Young Women’s program for us,” Brooks, who serves in her San Diego LDS Young Women’s Presidency, said in a phone interview. “It says to all of us it’s time to serve shoulder to shoulder.”

Neylan McBaine, founder of the Mormon Women Project, said that the change symbolizes “equal opportunity to gain both cultural and spiritual educations, serve in our external communities, and put those experiences ahead of a rush to marriage.”

It “will relieve the stigma of unmarried (LDS) college women,” McBaine wrote in an email, and that would “ultimately result in stronger, more equal marriages and more effective church governance in future generations.”

“Effective immediately, all worthy and able young men who have graduated from high school or its equivalent, regardless of where they live, will have the option of being recommended for missionary service beginning at the age of 18, instead of age 19,” said Monson, considered a “prophet, seer and revelator” by millions of Mormons.

“I am not suggesting that all young men will — or should — serve at this earlier age. Rather, based on individual circumstances, as well as upon a determination by priesthood leaders, this option is now available.”

By lowering the age for female missionaries to 19, LDS officials retained an age difference between the genders, Holland said, because “there needs to be at least some separation.”

When asked why church leaders didn’t equalize the length of mission service at two years — women will continue to go for 18 months — Holland said, jokingly, “one miracle at a time.” He did note that officials had considered doing so, but wanted to see how this change played out.

The impact is already being buzzed about in LDS living rooms and chapels, across the Mormon blogosphere and throughout social media.

Sherrie Hall Everett and her daughter, Jessica, cried when they heard the news. For Jessica, who is almost 17, it means being able to serve as a missionary two years sooner.

“I was so worried I may not be able to go if I were somewhere different in my life at that point (age 21),” said Jessica, who lives in Provo, Utah. “And now that it is at age 19, I can do it right out of high school and after a semester of college.”

Emily Stephenson, a Provo resident attending Utah Valley University, said she was eager to go on a mission when she was 19, saving up money and taking missionary-preparation classes. But by the time she turned 21, her passion had cooled.

“If only they would have changed it sooner,” Stephenson said, “who knows, I could be in another country serving or already be done with a mission.”

Women weren’t the only ones to praise the shift. A number of young men believe the change will prompt more of them to go on missions as well.

Mike Salazar, 23, called the change “inspired.” Salazar, who was originally from Kentucky, went on his mission to Mexico when he was 19.