VATICAN CITY (RNS) Pope Paul VI, who guided the Catholic Church through a tumultuous period of change in the 1960s and 70s, took a crucial first step toward possible sainthood when Pope Benedict XVI on Thursday (Dec. 20) recognized his predecessor’s “heroic virtues.” Paul VI is now considered “venerable” in the Catholic Church, and needs the Vatican to recognize a miracle due to his intercession in order to be beatified, or declared “blessed.” A second miracle would then elevate him to sainthood.

Giovanni Battista Montini (1897-1978) was elected to the papacy with the name of Paul VI in 1963. He oversaw the implementation of the modernizing reforms of the Second Vatican Council (1962-1965).

A top Vatican official and archbishop of Milan before becoming pope, Montini is also famous for the 1968 publication of the encyclical “Humanae Vitae,” which condemned contraception and birth control despite the opposition of a large part of the church.

Paul VI was also the first modern pope to travel extensively outside of Italy, visiting five continents in his nine foreign trips.

Vatican Insider, an Italian website published by the Italian daily La Stampa, wrote in recent weeks that both the theologians’ and the cardinals’ commissions of the Vatican’s Congregation for the Causes of Saints unanimously approved Paul VI’s progress toward sainthood.

According to the reports, proponents of Paul VI’s sainthood have already found a miracle to attribute to his intercession.

A baby was reportedly healed in the womb thanks to Montini’s intercession. Doctors had advised the California mother to abort the gravely ill fetus but she chose to carry her pregnancy through.

The child is now 15 and, according to Vatican Insider, doctors say he is perfectly healthy.

Benedict authorized the publication of the decree recognizing Paul’s “heroic virtues” during a Thursday audience with Cardinal Angelo Amato, who leads the Congregation for the Causes of Saints.

During the audience, the pope also advanced the causes of dozens of future blessed and saints, including several priests and religious who died as “martyrs” during the Spanish Civil War of 1936-37. 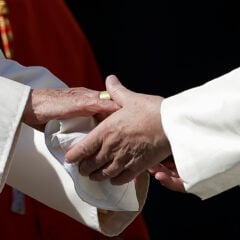