TOLEDO, Ohio (RNS) An Indiana man who said he gets all his information about Islam from talk radio and Fox News has pleaded guilty to setting fire to a mosque in September, but local Muslims voiced concern there may be more people like him out there. 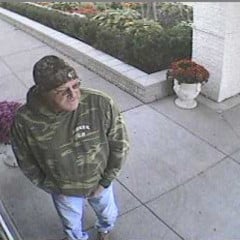 Randolph Linn, 52, of St. Joe, Ind., photographed by a surveillance camera at the Islamic Center of Greater Toledo. Linn pleaded guilty on Dec. 19 to setting an arson fire at the mosque on Sept. 30. RNS photo courtesy Perrysbury Township Police

Randolph Linn, a 52-year-old truck driver and former Marine, pleaded guilty in U.S. District Court in Toledo on Wednesday (Dec. 19) to federal counts of intentionally damaging religious property, using fire or explosives in commission of a felony, and using a firearm to commit a crime of violence.

Linn is expected to be sentenced to 20 years in prison and to pay restitution of $1 million.

“Yes, justice has been served and the Islamic center will be rebuilt and we will meet inside it and continue to do so. But the actual problem hasn’t been dealt with,” said S. Zaheer Hasan, spokesman for the United Muslim Association of Toledo.

He said the real problem is growing animosity toward Muslims. “The arson attack was an isolated incident but it was a product of that hatred,” he said. Mahjabeen Islam, president of the damaged Islamic Center of Greater Toledo, said Linn showed no remorse during the hearing.

Linn told Judge Jack Zouhary that he drank 45 beers before seeing a wounded U.S. soldier on television and spontaneously deciding to drive 82 miles from his home in St. Joe, Ind., to the Toledo suburb of Perrysburg, Ohio.

Linn, who had seen the roadside mosque while hauling his truck, took three firearms with him and filled three gas cans at a gas station, authorities said.

According to the mosque president, Linn told the judge he didn’t know any Muslims personally. “I only know what I hear on the radio and see on Fox News,” he said, according to Islam.

“My feeling is that the media needs to be more responsible,” Islam said. “The combination of ignorance about Muslims and Islam, and hate and alcohol, and then whipping up all of this hatred in the media, is a lethal combination.”

The judge told Linn: “You are no better than the terrorists or extremists you sought to punish.”

Islam said video showed Linn walking through the empty mosque with a gun on Sept. 30 before pouring gasoline in the prayer room and setting it ablaze.

“Had somebody been there, I dread to think about what could have happened because he had a gun,” she said. “If people had been there, it might have been like the Sikh temple shooting (in Wisconsin).”