CLEVELAND (RNS) As second-year teacher Caitlin McGlynn steps to the front of her class at St. Thomas Aquinas School, the all-male middle school students stop what they are doing to hear about the next steps of their business creation project. Today, McGlynn says, the task is to finish their web site design. 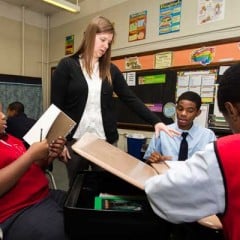 Being a rookie teacher in a cash-strapped Catholic school can be a daunting assignment, but when she gets home each night, McGlynn can compare notes with her roommates — fellow young teachers who live together, share meals and chores and receive guidance from veteran mentors.

McGlynn is part of the Lalanne service-teaching program administered by the University of Dayton, which she credits with honing her spiritual outlook as well as her teaching skills.

Faced with the increasingly difficult task of recruiting and retaining quality teachers in under-resourced Catholic schools, the Lalanne program steps in to provide coaching, support and — importantly — cash incentives.

One of 15 similar programs administered by Catholic colleges and universities in the nation, the Lalanne program touts a retention rate of 89 percent of graduates that are still involved in education, with 80 percent of them in Catholic schools. Program director Jacinta Mergler attributes the success to the focus on teaching as a vocation. 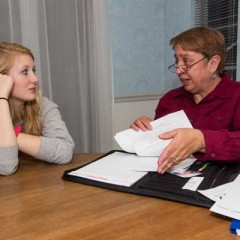 “We had teachers graduating who wanted to work in Catholic schools, who wanted to give back to the faith they had been given and share that with students,” says Mergler. “(Teaching) is more than just a job. You are responsible for the whole person. Supporting that is something we wanted to build into the program.”

A key component of the program includes Lalanne participants living in communal housing in the cities where they serve; the Cleveland teachers live in a house once occupied by the Sisters of the Humility of Mary. Participants share in cooking evening meals, cleaning, prayer and study time, and receive monthly visits from a chaplain. Dioceses have turned over unused rectories and convents to provide space for this communal atmosphere.

Teachers also commit two weekends each month to community activities with their housemates. During the 2011/2012 school year, groups visited other cities — a Halloween party was hosted by the Michigan teachers and an ugly Christmas sweater contest was held by the Indianapolis house.

Since the program began in 1999, more than 120 teachers have gone through the two-year program that selectively recruits teachers from Catholic universities and places them in urban Catholic school settings for two years while they collect a $16,000 annual stipend and earn a master’s degree in an educational field. “We’ve done a good job in providing a positive experience for the teachers, and the principals are telling me how great a job these teachers are doing,” says Steve Costello, associate superintendent of Catholic schools in Lansing.

“It’s competitive getting into the program, and so we’re really getting top-notch teachers coming out of it and we’re very impressed,” he said. “The best reason for them to be here is that we have young people on fire with their faith who are giving two years of service to their church to help our Lord’s children. I can’t tell you what a witness that is to the families that are served in our schools.”

Sitting around the dinner table on a recent evening, the Cleveland teachers share experiences from their day — interactions with students and parents, new curriculum expectations and upcoming plans. Mergler, who visits each of the Lalanne communities twice a year, is there to listen, catch up and mentor program participants.

A former teacher herself, Mergler laments how many teachers quit after their first year because of a lack of support with transition and difficult teaching environments. “I was fortunate to get that support,” she remembers of her own experience as a new teacher. “I fell flat on my face, but there was someone there to pick me up.”

The transition to mentor has given Mergler “a lot of hope” for the future of Catholic educators. “We are an extra set of eyes,” she said of her mentoring role. “These teachers don’t have anything to prove, they are already licensed, they’re out there, but it’s a struggle.”

While the challenges of teaching in under-resourced schools isn’t always easy, first-year Cleveland teacher Audrey Lawless can’t imagine being anywhere else in her career.

“I feel like I received so much from my Catholic education,” says Lawless of her education in Catholic parochial schools and at the University of Notre Dame. “I wouldn’t be where I am today without that education. The Lalanne program has allowed me to give back and share.”