(RNS) Myrlie Evers-Williams, 79, the widow of slain civil rights leader Medgar Evers, will be the first laywoman to give an invocation at a presidential inauguration when she prays at President Obama’s swearing-in on Jan. 21. 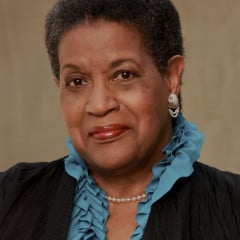 The author, civil rights and political activist and former NAACP chairman is a scholar at Alcorn State University in Mississippi.

She talked with Religion News Service about the upcoming confluence of events: the second inauguration of the nation’s first African-American president, the 50th anniversary of her husband’s death in June 1963, and the swearing-in occurring on Martin Luther King Jr. Day.

Q: What was your reaction when you were chosen to give the invocation at President Obama’s second inauguration?

A: First of all, it’s a major honor to do that. Secondly it had been years ago at the March on Washington when I was scheduled to be a speaker there and unfortunately I could not get there. That was one thing that has haunted me over the years. Fifty years later, I receive an invitation to deliver the invocation.

Q: How do you feel about this occurring on the 50th anniversary of the murder of your husband, who was very active in civil rights work?

A: The focus has been on Dr. King and there certainly is nothing wrong with that at all. But I have always wanted to see Medgar be recognized for what he did. Medgar’s remains are in Arlington Cemetery, only about four to five miles away from the spot where the inauguration will take place. It’s kind of a miracle for me that all of this is happening at this particular time.

Q: What does it mean to you that President Obama is using King’s Bible  to take the oath of office on Martin Luther King Day?

A: How can a country become more historical than that? I think it speaks so highly to America’s strength and willingness to change even though it has taken years to bring about efforts from the civil rights struggle into fruition and we are not yet there. But it sends a symbol not only to America, with all of those things combined, but to the world that America is strong, that America does believe in equality for all.

Q: Did you ever imagine as you worked with your husband Medgar Evers on civil rights that one day there would be a black president?

A: Of course, we all knew, we hoped, we worked, we prayed that one day there would be a man or a woman of African-American descent who would become the president of the United States of America. That has been a dream come true but if we look at the politics leading up to particularly his second term, there were blocks that came during this time of getting people to register and to vote that are reminiscent of some of those actions that took place 50 years ago to keep people of my race and others away from the polls.

Q: You are the first laywoman to give the invocation, following in the footsteps of many clergy. Are you feeling just a little bit of pressure?

A: Yes and no. Yes because there are so many people who will be watching and making a decision as to whether I have done a good job or not. There will be critics, I’m sure, and there will be people who will applaud not only my presence but what I will say.

Q: Do you have any idea what you will pray for yet?

A: I hope to express feelings that are true, that are honest, that are open and maybe a wee bit insightful in terms of what is happening in America today and in the world as a whole.

Q: What is your religious affiliation?

Q: Do you have any thoughts about the Rev. Louie Giglio stepping down from the inaugural program?

A: I’m simply delighted that I was not so controversial that I would step down or be asked to step down.

Q: Have you ever prayed in public before?

A. I have been on the lecture circuit since the day Medgar was assassinated. I delivered my first speech that night. I have never been shy in mentioning my relationship with what I call God, a Spirit, and there certainly have been times over the years that I have called on him — or her, if you wish — in public. I deeply believe that there is a Supreme Being that sees us through.

Q. At the inauguration you will be praying in public before a larger number of people than in the past. Are you OK with that?