Here’s the lineup for this morning’s National Cathedral prayer service for the inauguration, and a quick backgrounder to the who’s-who of speakers: 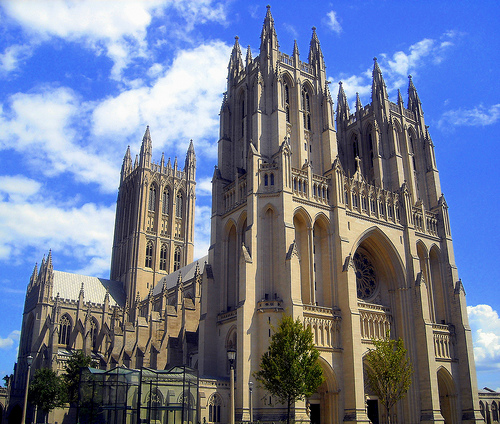 — Budde is the Episcopal bishop of Washington, and the National Cathedral is her church. Hall is the dean (pastor) of the cathedral and runs the day-to-day operations of the iconic church. They’re both there as the official hosts of the service.

— Watkins is a friend of the White House and a former member of the president’s faith-based advisory council.

— Williams-Skinner isn’t quite a household name, but she represents African-American churches and is a friend of the White House.

— Wilson is perhaps the most interesting name on the list. She heads the nation’s only predominantly gay denomination, and her choice has to be seen in light of the president’s landmark nod to gay Americans in his inaugural address on Monday.

— Schonfeld is first woman to lead a rabbinical group in the U.S., representing Conservative rabbis.

— Anderson is one of the few (if not the only) evangelicals on the program, and represents a moderate-yet-conservative voice. He’s not a conservative firebrand and heads the middle-of-the-road NAE. He’s a trusted voice for the administration, even if they don’t always agree.

— Lohre is the youngest president of the venerable NCC, and a Lutheran. She’s a nod to the old Protestant establishment, which has enjoyed closer relations to the Obama White House than they did under George W. Bush.

— Magid is the leading Muslim voice on the line-up, and represents the nation’s largest Muslim umbrella group. He’s also a regular on the D.C. interfaith circuit.

— Wuerl represents the U.S. Catholic hierarchy, as well as local D.C. Catholics. He hasn’t had particularly close ties to the Obama White House (unlike his predecessor Theodore McCarrick’s ties to the Bush White House) and he’s not dived into the D.C. political or religious circuit. Even so, he’s seen as a relatively honest broker, even if he’s shunned the role of unofficial chief liaison between the White House and the bishops.

— Another interesting choice, especially in the wake of last year’s shooting at the Sikh temple in Oak Creek, Wis.

— Honestly? Not someone we’ve heard of before (which isn’t to say that he’s not important), but he obviously hails from the president’s hometown.

— Schneck has been a leading Obama surrogate among Catholics and an outspoken supporter of the White House, even as ties between the White House and the hierarchy have been, um, tense.

— Salguero is one of a handful of Hispanic pastors vying to be the voice of Latino evangelicals — a group that will be pushing the White House hard on immigration reform.

— Jones, another friend of the White House, represents the old-line Protestant establishment that is Union Seminary. She’s a respected scholar and teacher.

His Eminence Archbishop Demetrios of America, Primate of the Greek Orthodox Church in America
and Exarch of the Ecumenical Patriarchate

— Beyond his role representing Eastern Orthodox Christians, Demetrios is the go-to guy for interfaith events in D.C. and on the national stage.

— Hamilton’s an interesting guy — youngish, mainline and head of one of the largest churches in the U.S. Hamilton admitted he’s preached in front of thousands of people, but never had the president sitting in the front row. We profiled him here.

The Most Reverend Katharine Jefferts Schori, Presiding Bishop and Primate
The Episcopal Church

–– Like Episcopal Bishop Budde, the National Cathedral is also Jefferts Schori’s church. She has an automatic invite to all services at the cathedral, but she’s also a highly visible religious leader — and the first woman to head a major national denomination.

— Huh. Caldwell was a close friend of George W. Bush and a frequent face at Bush-era services at the cathedral and elsewhere. It’s sort of interesting that he’s been brought back for this one.

— Another interesting pic. Muhammad is a scion of the Muhammad dynasty that once led the Nation of Islam and later broke off from the group’s racism. She’s from Obama’s native Chicago, but also represents a new face within American Islam.

— Jacobs has long been known as an innovator and congregational guru within Reform Judaism; last year he assumed the presidency of the nation’s largest Jewish group and is quietly (and quickly) building a national profile.