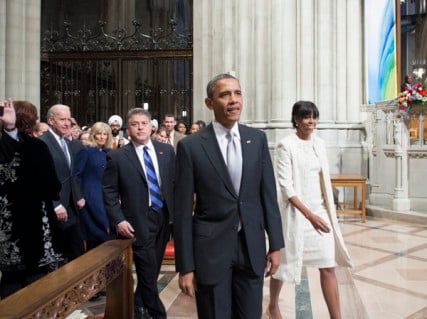 WASHINGTON (RNS) President Obama started his second term with a traditional worship service and a challenge to help heal the nation’s divides.

“We find ourselves desperately longing to find common ground, to find a common vision, to be one nation indivisible with liberty and justice for everyone,” said the Rev. Adam Hamilton, the Kansas City pastor chosen to preach Tuesday (Jan. 22) at the National Prayer Service at Washington National Cathedral. “In this city and in this room, are the people who can help.”

The inaugural service carried that theme for more than an hour, presenting the nation’s rainbow of faiths and cultures with a bilingual welcome and reading from the Gospel of Matthew, and an imam and Christian and Jewish cantors taking turns calling the congregation to prayer. The service of petitions and patriotism included a Sikh woman calling for “concern for our neighbors” and a Catholic layman urging a remembrance of Americans’ interdependence. The red, white and blue theme extended to the altar flowers and a worshipper’s flag-festooned headscarf.

“Seek the Lord who wills to be found,” said the Rev. Nancy L. Wilson, moderator of the Universal Fellowship of Metropolitan Community Churches, reading from the biblical book of Isaiah.

Her presence marked the first time that her predominantly gay denomination had been included in an inaugural prayer service. The cathedral recently announced that it would begin performing same-sex marriages, and Obama made two references to gay rights in his inaugural address Monday.

Though the sole evangelical leader scheduled for the public swearing-in, the Rev. Louie Giglio, was replaced in the program after 1990s comments criticizing gays were revealed, Tuesday’s service included the presidents of the National Association of Evangelicals and the National Latino Evangelical Coalition. “Faithful God: accept the fervent prayers of all your people,” said the Rev. Leith Anderson, NAE president, opening the “prayers for those who govern.’’ The petitions continued with National Council of Churches President Kathryn Lohre asking for divine strength for Obama and Vice President Biden, and Islamic Society of North America President Mohamed Magid asking God to give public officials “discernment and the self-control necessary to our time.” 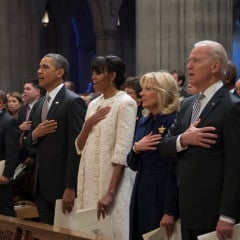 Though members of Congress and the president’s cabinet were in the 2,200-member congregation, Hamilton seemed most concerned with preaching directly to the president. He singled him out as he spoke of the need to bring people together across party lines with a “new common national vision” before conquering thorny political debates over the debt ceiling and health care.

“God has given you a unique gift, Mr. President,” he said, speaking of his ability to cast a vision, “unlike any other president we have ever had.”

“You should have been a preacher,” he added, drawing laughter from the cathedral crowd.

He thanked the president and other leaders for being willing to live in “glass houses” and noted that such leadership comes with criticism.

“I don’t know how you are still standing,” he told Obama.

“Bless these United States of America,” Warnock prayed. “Transform the jangling discourse of our nation into a beautiful symphony of the human family. And through us may the earth and all of the families of the earth be blessed.” 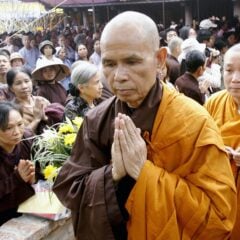