As we celebrate the birth of the Prophet Muhammad (the Mawlid), it is good to reflect on the ways in which various memories of Muhammad have continued to reverberate through Islamic society. One of the loveliest has been through a distinctly Turkish tradition called Mevlud (also spelled as Mevlut) which recalls and celebrates the birth of the Prophet. These poems, which might well be called the Nativity of Muhammad, would be recited on major life occasions, and have been for centuries a key part of the devotional life of Ottomans. While there are multiple versions of these poems, perhaps the most well-known and beloved Mevlud is that by Suleyman Chelebi.

Here are portions of it, courtesy of the great German scholar of Islam, Annemarie Schimmel, whose own engagement with Islam began with a deep affinity towards Turkish Islam and Muslims globally. The poem begins, as any good birth narrative does, with a recollection of the mother’s experience. In this case, it is with Amina, Muhammad’s mother, who according to Turkish custom is referred to as Amina Khatun(Lady Amina):

Amina Khatun, Muhammad’s mother dear:
From this oyster came that lustrous pearl.
After she conceived from ‘Abdallah
Came the time of birth with days and weeks.
As Muhammad’s birth was drawing near 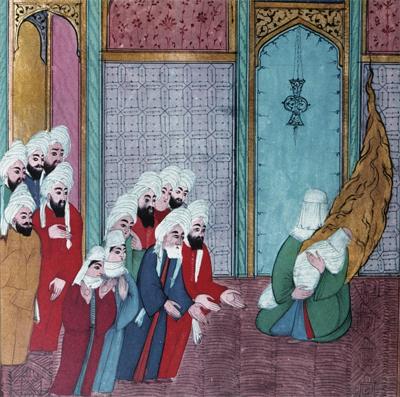 Many signs appeared before he came!

In the month of Rabi‘ al-awwal then
On the twelfth, the night of Monday, look,
When the best of mankind was born
O what marvels did his mother see!

Spoke the mother of that friend: “I saw
A strange light; the sun was like its moth.
Suddenly it flashed up from my house,
Filled with world with light up to the sky.
Heavens opened, vanquished was the dark,

And I saw three angels with three flags.
One was in the East, one in the West,
One stood upright on the Ka‘ba’s roof.
Rows of angels came from heaven, and
Circumambulated all my house;

Came the houris group on group; the light
From their faces made my house so bright!
And a cover was spread in mid-air,
Called ‘brocade’ – an angel laid it out.
When I saw so clearly these events
I became bewildered and confused.
Suddenly the walls were split apart
And three houris entered in my room.

The poem above begins with a recollection of Muhammad as a pearl, a pun in Arabic where the words for “pearl” and “orphan” are similar. Muhammad of course was born as an orphan, and yet in the marvelous spirituality of the Turks his orphan background is transformed to him having been precious, pearl-like. The birth of Muhammad is told first through the experience of his mother, and the wonders that she beheld. A light fills her heart, and her house is circumambulated. Her house becomes like the Ka‘ba, as it were, and the various mentions of “opening” are reminiscent of the Qur’an’s recalling of the need to have one’s heart opened. The home of Amina becomes like a heart: all is illuminated, all is opened. The poem goes on to state:

Some have said that of these charming three
One was Asiya of moonlike face, One was Lady Mary without doubt,
And the third a houri beautiful.
Then these moonfaced three drew gently near
And they greeted me with kindness here;

Then they sat around me, and they gave
The good tidings of Muhammad’s birth;
Said to me: “A son like this your son
Has not come since God has made this world,
And the Mighty One did never grant
Such a lovely son as will be yours.
You have found great happiness, O dear
For from you that virtuous one is born!

He that comes is King of Knowledge high,Is the mine of gnosis and tawhid [monotheism].
For the love of him the sky revolves,
Men and jinn are longing for his face.
This night is the night that he, so pure
Will suffuse the worlds with radiant light!

This night, earth becomes a Paradise,
This night God shows mercy to the world.
This night those with heart are filled with joy,
This night gives the lovers a new life.
Mercy for the worlds is Mustafa,
Sinners’ intercessors: Mustafa!’”

Following the Qur’an all Muslims celebrate the connection among the various Prophets, particularly the close connection among Abraham, Noah, Moses, Jesus, and Muhammad. Here that same connection is reaffirmed through a female perspective, by talking about how the luminous women, through whom each of these channels of grace (baraka) were opened up onto this world, gather around Amina, greeting her as Muhammad is being born to her. The poem specifically mentions three female visitors for Amina, as it were the three wise (and beautiful) women: Moses’ Asiya, Jesus’ Lady Mary, and a houri — a celestial beauty. [While in some recent imagination the termhouri is taken in a sexual context, here the emphasis is purely on the houri’s beauty and chastity.]

As has been characteristic of the Muslim tradition, the paramount quality of Muhammad emphasized here is that of rahmatun li ‘l-‘alamin (“a mercy to all the worlds”), a direct reference to Qur’an 21:107. It is Muhammad the intercessor for sinners, the mercy for the worlds that is the object of Muslim devotion here. Just as the earth became like a paradise upon Muhammad’s birth, those who recite the poem hope to turn their own homes, their own hearts, and their own lives into one filled with God’s mercy. Echoes of the echoes of Muhammad reverberate. The Mevlud poem goes on to describe the very physical experience of birth, that magical experience where a life enters this world through a grace-filled opening, resulting in an opening of a new gate of mercy for humanity.

“They described him in this style to me,
Stirred my longing for that blessed light.”
Amina said: “When the time was ripe
That the Best of Mankind should appear,
I became so thirsty from that heat
That they gave me sherbet in a glass.
Drinking it, I was immersed in light
And could not discern myself from light.

Then a white swan came with soft great wings
And he touched my back with gentle strength.
And the King of Faith was born that night:
Earth and heaven were submerged in light!”

Amina here is much more than a simple “vessel” for carrying Muhammad. Her own experience here is mystical, stating that she was “immersed in light” and that she couldn’t discern herself from the light. Indeed the whole world is described as being illuminated. These passages all recall the strong tradition of illuminative contemplation in Islam, harkening back to those Qur’anic verses that describe God as the “light of the Heavens of the Earth.” In both Sunni and Shi’i traditions human beings become seen as reflecting that light onto this world, light upon light.

The next section of the poem is referred to as the great “Welcome”, in which all of the cosmos joins in welcoming the newborn Muhammad. This Muhammad is much more than simply a child, he is the cure for pain, one who is not separated from God, and a saintly being (“Friend of God”), whom all will call upon to deliver them from sin in the days of the Hereafter: 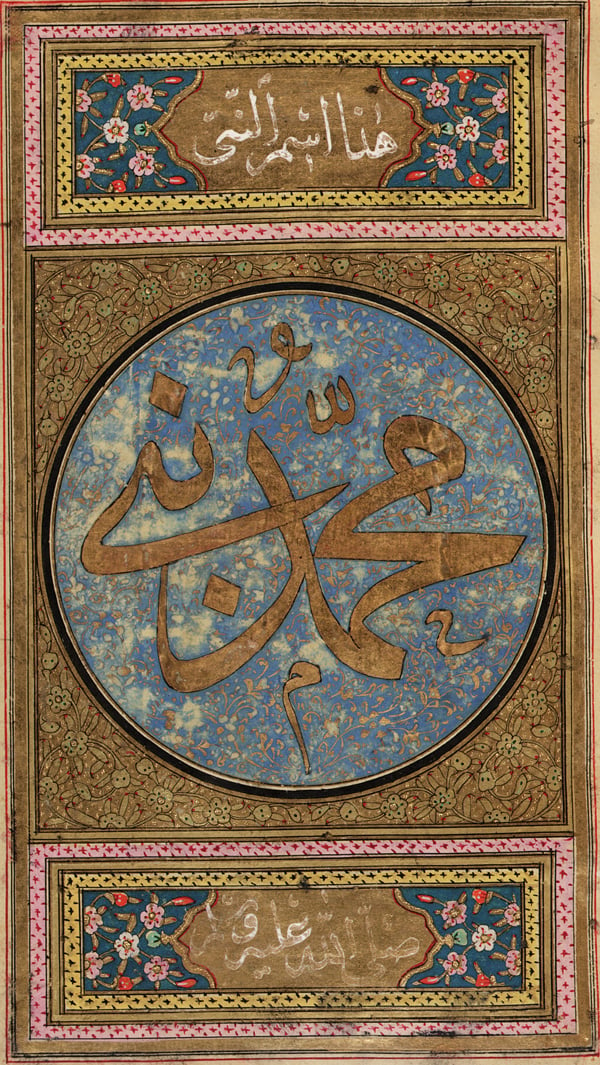 It was this Muhammad — the cosmic Muhammad who served as the cause of creation, the Muhammad that God so loved that were it not for him creation would not have been — that was the object of Ottoman devotion. Just as the moon reflects the light of the sun, so does Muhammad reflect the light of God onto the cosmos. The aboveMevlud poem continues to be recited in Turkish homes down to today as it was in Ottoman times, a remarkable longevity in devotional life of Muslims.

Religion Hub
France rules against burkini swimwear for religious reasons
Follow us on Facebook!
Submit your photos to RNS