(RNS) Ever since she was a little girl, Savannah Uqdah longed to pose for pictures and strut down a runway with flashbulbs bursting. But as an observant Muslim who didn’t want to violate Islam’s tenets on modesty, the aspiring model assumed that designers wouldn’t hire someone who was unwilling to show some skin. 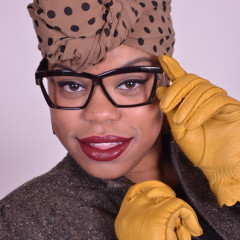 Ever since she was a little girl, Savannah Uqdah longed to pose for pictures and strut down a runway with flashbulbs bursting. But as an observant Muslim who didn’t want to violate Islam’s tenets on modesty, the aspiring model assumed that designers wouldn’t hire someone who was unwilling to show some skin. RNS photo courtesy Underwraps Agency.

Uqdah shelved her modeling dreams and instead expressed herself through the fashions she wore.

Nailah Lymus started her fashion label, Amirah Creations, in 2004. She has met and heard about lots of Muslim women who were interested in modeling, but didn’t pursue it because they assumed they would be asked to model clothing that violated their beliefs.

“I wanted to promote modest attire — that’s really what the agency is about — and not feeling like you have to show everything to be a model and to make it far,” said Lymus, who lives and works in Brooklyn, N.Y.

Since then, her agency has contracted with four Muslim female models, getting them work in photo and video shoots, as well as runway shows during Fashion Week.

One of them is Uqdah, whom Lymus knew from the Brooklyn mosque they both attended, who will be modeling for the plus-size label Ann Nahari during the upcoming Fashion Week (Feb. 7-14) in New York.

For now, Lymus is mostly (but not entirely) focusing on Muslim models because she believes Muslims are underrepresented in the industry. But she also believes that the demand for modest clothing cuts across religions and cultures, and ultimately wants Underwraps to be known more for its modesty than its Muslim orientation.

As an example, she points to Kylie Bisutti, a Victoria’s Secret model who abruptly retired from lingerie modeling last February, citing her Christian beliefs and desire to be a good wife. She still models less racy clothing.

Islamic views on modeling vary. Scholars from the venerable Darul Uloom Deoband seminary in India issued a fatwa in 2010 condemning female modeling as un-Islamic because it puts the female body on exhibit. A few fashion magazines in some Muslim countries will not show women’s faces.

But Imam Talal Eid, an Islamic law expert in Boston and former member of the U.S. Commission on International Religious Freedom, said modeling is acceptable as long as the models maintain their modesty.

“You have to show the clothes. You can’t have fashion without models,” said Eid, whose daughter is a designer with Calvin Klein in New York.

Rania Iswarani, editor at the Muslim style blog Fashfaith.com, disagreed that modeling draws improper attention to women. “People perhaps do pay attention to them, but NOT to their skin. The body is covered. So these people are attracted to the clothes Muslim women are wearing,” Iswarani wrote in an email.

“I’m in constant need of models for my company and a Muslim modeling agency would help me profusely,” said Melanie Elturk, CEO and chief designer of HauteHijab.com, an online Muslim fashion retailer in Chicago. “We do display the vast majority of our products on dress forms instead of models to try and avoid any controversy that Muslim models may stir up, but some products just need to be displayed on a human body in order to show what the piece will look like.”

Underwraps’ Lymus argues that there’s greater demand for modesty than perhaps the fashion industry realizes, and that it will need models to respond. Since launching Underwraps, Lymus has received more than 400 queries from aspiring Muslim models from several different countries, including the U.S., Indonesia, Great Britain, and Australia.

“There are a lot of individuals, Muslim or not, who wear modest clothing,” Lymus said. “You’re going to be at your best when you’re comfortable in your own skin, not when your uncomfortable with what you’re wearing.”

Lymus’ agency and Muslim designers are banking on what they believe is a huge market for fashion in the Muslim world. Barjis Chohan, a British Muslim designer who studied under the legendary Vivienne Westwood, estimated the market at $96 million, noting that New York-style fashion weeks have started in cities like Istanbul, Cairo, Karachi and Jakarta.

“As a model, you want to be as marketable as possible,” Lymus said. “And if you’re a Muslim model who might wear a headscarf, you’re limited because not many designers want models with headscarves.”

But she added. “I haven’t launched the agency to conform to what the existing industry is doing.”

There are many famous Muslim models who didn’t worry about religious restrictions, including: