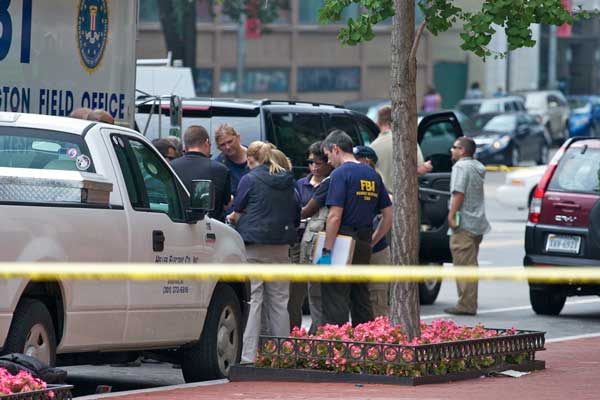 A security guard is recovering after he was shot Aug. 15 in the headquarters of the Family Research Council, a conservative Christian lobbying group. RNS photo by Chris Lisee

The Virginia man who stormed the D.C. headquarters of the conservative Family Research Council last August, shooting and wounding a security guard, pleaded guilty Wednesday morning to three charges, including the District’s first-ever prosecution under a 2002 anti-terrorism law.

Floyd Lee Corkins, II, 28, will be sentenced on the three charges on April 29. From the U.S. Attorney’s press release:

According to a statement of offense, signed by the defendant as well as the government, Corkins targeted the Family Research Council because of its views, including its advocacy against recognition of gay marriage.  He entered the building with the intention of shooting and killing as many employees of the organization as he could.

In a search after the shooting, MPD officers discovered two fully loaded magazine clips in one of Corkins’s front pants pockets, as well as a Metro card and a handwritten list containing the names of the Family Research Council and three other organizations that openly identify themselves as having socially conservative agendas. A search of Corkins’s backpack turned up, among other items, a box of 50 rounds of 9 mm ammunition. They also found 15 individually wrapped sandwiches that Corkins had purchased the previous day from Chick-fil-A.

Corkins later made statements to the FBI in which he said that he was a political activist and considered the Family Research Council to be a lobbying group.  He also stated that he intended to kill as many people as possible and smother the Chick-fil-A sandwiches into their faces. Among other things, he said, “Chick-fil-A came out against gay marriage so I was going to use that as a statement.”

FRC president Tony Perkins said the evidence shows that Corkins used the Southern Poverty Law Center to target FRC for its stance against gay marriage, and called again for the SPLC to remove the FRC from its list of “hate groups”:

“The Southern Poverty Law Center can no longer say that it is not a source for those bent on committing acts of violence.  Only by ending its hate labeling practices will the SPLC send a message that it no longer wishes to be a source for those who would commit acts of violence that are only designed to intimidate and silence Christians and others who support natural marriage and traditional morality.”

News
Ilhan Omar, Rashida Tlaib denounce Facebook as complicit in anti-Muslim violence
News
What’s behind the ‘Cuties’ outrage?
Spiritual Politics
Trump’s 2020 religious attack on Biden harks back to 1800
Opinion
Religious liberty means COVID-19 restrictions cannot target churchgoers
News
In calls with faith leaders, White House focuses on virus as well as election
© Copyright 2020, Religion News Service. All rights reserved. Use of and/or registration on any portion of this site constitutes acceptance of our User Agreement and Privacy Policy, Privacy Statement and Cookie Notice. The material on this site may not be reproduced, distributed, transmitted, cached or otherwise used, except with the prior written permission of Religion News Service.