(RNS) Pope Benedict XVI came into office with the reputation of a conservative hard-liner, a vigorous defender of orthodoxy who wanted to restore Tradition — yes, with a capital “T”– to a church that was seen as disturbingly undisciplined. 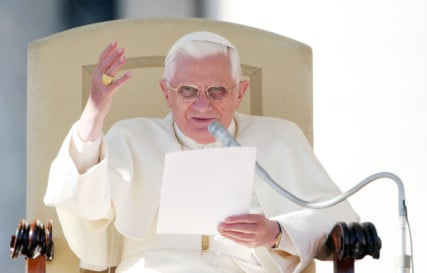 Pope Benedict XVI waves to the crowd during one of his weekly general audiences in St. Peter’s Square at the Vatican in 2007. RNS photo by Gregory A. Shemitz.

Yet with the stunning announcement that he is resigning as the 264th successor to Saint Peter, Benedict may wind up fundamentally changing the way the church and the world view the papacy.

That’s because the papacy has come to represent more than an office, and the pope more than just a higher-ranking priest or bishop who enjoys lifetime tenure, a nice Vatican apartment and the privilege of wearing a white cassock no matter the season.

Instead, the papacy is seen as a divine mission unlike any other in the church, and one that ends only in death.

“Christ did not come down from the cross,” the late John Paul II, Benedict’s immediate predecessor, would tell aides who wondered if his failing health and public suffering should compel him to relinquish his office.

A man is elected pope by the cardinals, yes, but at the behest of the Holy Spirit, according to Catholic theology. He takes a new name, and can’t even go home to collect his things: He moves into the Vatican right away, inhabiting a new identity in a new position — so superior that canon law says a pope can resign, but says he cannot resign to anyone.

To reign until death was the only thing that the Vicar of Christ on earth can do, and should do. Bishops retire at 75 and cardinals cannot vote in a conclave after age 80, but a pope was supposed to be forever.

Modern medicine started to change that, since popes could now live longer than ever before, even after the body or mind had failed. Modern media also played a role by demanding that world leaders — even popes — be available and visible and on the go, all the time.

Besides, church history taught that there were huge and potentially messy political ramifications to having, in effect, two popes at once. As John Paul once quipped to a doctor before an operation, “You have to cure me because there is no room for a pope emeritus.”

Well, there wasn’t — until now.

Working out the practicalities of having two living popes is something the Vatican is still trying to resolve. Benedict says he will go to the pope’s summer residence outside Rome when he formally resigns on Feb. 28, and after that he will live within a cloister inside the Vatican. He will have no part in the conclave to elect his successor, the Vatican says, and will not have a public role once his successor is named. 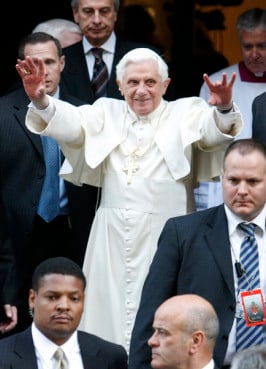 Will that be enough to avoid the kind of behind-the-scenes whispers of manipulation that marked papal elections centuries ago, and the sort of court intrigue that still drags the Vatican into periodic scandals?

Part of John Paul’s concern over resigning was that a significant chunk of the church that was so devoted to him as a person might start a schism, declaring that the retired pontiff was the one true pope and all others pretenders to the throne.

“There is always the risk of schism,” conceded the Rev. Robert A. Gahl Jr., a professor of philosophy at the Pontifical University of the Holy Cross in Rome, which is run by the conservative Opus Dei society.

“However, Benedict has acted with great transparency and in full accord with the law,” Gahl added. For Benedict followers, “to claim loyalty while disobeying would be the summit of self-contradiction.”

It’s still unclear how this particular chapter in the papacy’s colorful history will play out, and much will depend on what Benedict himself does during the interregnum and afterward; his resignation has certainly been hailed across the fractious Catholic world as one of great humility and charity.

But a graceful exit could also be Benedict’s lasting legacy precisely because this most traditional of churchmen has, with his simple decision, effectively altered the meaning of the papacy.

“Benedict’s resignation helps refine the notion of the papacy and, thanks be to God, distinguishes the person from the office,” Terence Tilley, a theologian at Fordham University and past president of the Catholic Theological Society of America, wrote in a discussion of Benedict’s resignation at the blog of Commonweal, a leading Catholic magazine.

“By this act, his frank admission that to carry out the Petrine ministry certain conditions of bodily and mental health are required, Benedict helps bring the papacy back within the Church, down from what Hans Urs von Balthasar called ‘pyramid-like isolation,’” added the Rev. Joseph Komonchak, an eminent church historian.

There is still the potential for this move to become another left-right battle in the church. Liberals could welcome this reimagining of the papacy as a way of demystifying the job and perhaps pointing toward a less papal, more collegial form of church governance. Conservatives could fear the same thing.

But it is crucial to remember that Benedict himself, both when he was Cardinal Joseph Ratzinger and after he was elected pope, had openly discussed the justifications for a pope to resign. And he had the orthodox credentials to pull it off — a kind of “Nixon to China” moment in Catholic history.

So while his move was shocking, it should not be a surprise.

From the beginning Benedict said he wanted his ministry to put the focus on Christ, not on himself as the pope. Ironically, by resigning, he has grabbed the spotlight, for the moment. But in the long run, he may well have redefined the papacy much as he hoped, and more radically than many expected.