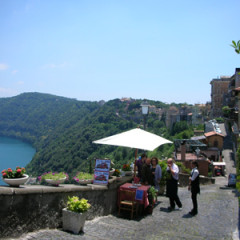 VATICAN CITY (RNS) Pope Benedict XVI will continue living inside the Vatican once his retirement becomes official on Feb. 28, but observers say he will probably keep a low profile -- both before and after the election to choose his successor.

The 85-year old German will officially step down from the papacy at 8 p.m. local time on Feb. 28.

As the Roman Catholic Church prepares for the election of a new pope, Benedict will move to the papal summer residence in Castel Gandolfo, just outside of Rome.

But this will only be a temporary abode.

According to the Vatican's chief spokesman, the Rev. Federico Lombardi, after the election Benedict will settle in a former cloistered convent inside the Vatican walls, which is currently being renovated.

During a press conference on Monday (Feb. 11), Lombardi said Benedict will “lead a life of prayer,” and will be free to “move and communicate to the public” as he pleases.

But Benedict will probably keep a low profile after his resignation, without running any risk of overshadowing the work of his successor. 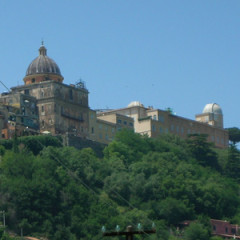 Castel Gandolfo, located 15 miles south of Rome, has been a summer palace for popes since 1624. The complex is also the official home to the Vatican observatory, although most observations now take place in Arizona. Religion News Service photo by Francis X. Rocca.

“He's going to live in a monastery, and life in a monastery is very quiet,” Gregory Burke, a former Fox News correspondent who is now the Vatican's senior adviser for communications, told Religion News Service.

According to Burke, in the coming years Benedict will spend his time in retirement “mostly to read, study and pray.”

While the pope had hinted in 2010 that he could resign if he felt “no longer physically, psychologically, and spiritually capable of handling the duties of his office,” few expected him to actually step down now.

Just recently, the Vatican had announced the schedule for Easter celebrations presided by Benedict. And the Catholic Church is in the middle of a “Year of Faith” proclaimed by the pope himself that's scheduled to end in November 2013. The Archdiocese of Philadelphia even had plans to host him in 2015.

The pope's health has been declining in the last few months and he had started leaning on a cane to walk. 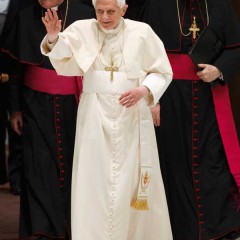 But Lombardi denied that there was any specific illness or condition behind the pope's decision to step down.

According to the Vatican spokesman, in today's world the papacy requires a “vigor, perhaps stronger than in the past. It is a vigor that the Pope says he has felt diminish in him in recent months.”

In the weeks leading up to Feb. 28, Benedict will continue to “fully carry out his functions,” Lombardi said, including the official opening of Lent on Ash Wednesday (Feb. 13).

He stressed that Benedict will have no role in the conclave to elect his successor, nor in running the church in the weeks leading up to the opening of the conclave after he officially resigns.

“The Apostolic Constitution gives no role in this transition to a pope who resigns,” he said.