As a retired Roman Catholic priest who still conducts the occasional Mass, he will bow to a church that adamantly opposes same-sex unions. 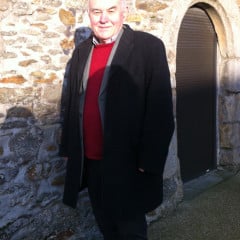 Elie Geffray straddles both sides of a bitter divide over gay marriage in France. As a retired Roman Catholic priest who still conducts the occasional Mass, he will bow to a church that adamantly opposes same-sex unions. RNS photo

But as mayor of this farming village deep in Brittany’s heartland, Geffray is willing to conduct civil marriage ceremonies for gay and lesbian couples.

“I belong to two institutions, the Republic and the church, which don’t have the same laws,” he said during an interview at his tiny office in City Hall. “I will abide by both.”

The quiet, 73-year-old mayor is likely to feel the pressures of both church and state in a matter of weeks. On Tuesday (Feb. 12) , the French National Assembly passed a bill legalizing gay marriage and adoptions by a vote of 329 to 229. The bill’s passage appears inevitable in the Senate which, like the lower chamber, is dominated by President Francois Hollande’s ruling Socialist Party.

If passed, France will become the latest European country to legalize gay marriage; the British House of Commons passed a gay marriage bill on Feb. 5 despite fierce opposition from Anglican and Roman Catholic leaders.

While polls show the majority of French support gay marriage, the legislation has drawn stiff resistance in this nominally Catholic but deeply secular country. Battles for and against the legislation have played out in politics and on the streets, with demonstrations drawing tens of thousands of people on both sides.

The debate has also reached this bucolic slice of western France, after Geffray aired his personal views — in favor of gay marriage — to the media.

“Homosexuals were categorized and excluded for a long time,” he said. “Today, they must be recognized. And that recognition must be accompanied by rights.”

Today, letters from across France pile up on his desk, both complimentary and critical.

“About 60 percent support me. They’re saying, ‘Finally the church is in touch with the modern world,'” Geffray said. “Another 10 percent disagree, but they’re open to discussion.”

A small slice of critics, however, are not. Geffray laughs. “I don’t respond to their mail because they’re completely blocked,” he says.

Geffray laid out his position in a letter to the local bishop of Saint-Brieuc. “He doesn’t agree with me, but he recognizes I’m a free man,” he said.

In this village of farmers and factory workers, Geffray has become something of a celebrity. Most residents do not go to church. At the local bar, where he goes before work and after Mass to chat and sip hot chocolate, many locals are noncommittal.

“Elie is someone I respect very much,” said 32-year-old Philippe Landais, who like everyone here is on a first-name basis with the mayor. Gay marriage, he added, “will just become part of our customs.” 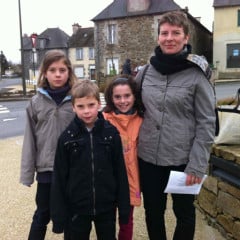 Housewife Agnes Goudin said she had no strong feelings about gay marriage. “I’m someone who is pretty open,” she said. “I think everyone should have the freedom to choose.” RNS photo

Pausing after Mass with Geffray on a recent Sunday, housewife Agnes Goudin said she had no strong feelings about gay marriage. “I’m someone who is pretty open,” she said. “I think everyone should have the freedom to choose.”

But bar owner Cecile Gastine said many Ereac residents are against the unions.

“There are many big families here, with children, parents, grandparents,” she said. “They have big farms that are passed down through the generations. They cannot understand why two men or two women want to live together.”

Geffray himself has gotten little feedback from local residents. Probably, he believes, because villagers disagree with his views — although they like all the media attention. “But if you talk to people, their real problems are high prices, unemployment, social injustice,” he said. “The question of gay marriage seems pretty remote.”

After Mass, Geffray changed into a dark blue suit and overcoat and headed into a blustery wind to the bar. He greeted villagers, ordered hot chocolate and chatted with a pair of visiting reporters.

If gay marriage is adopted, he said, “it suggests the French state is more open to homosexuals than the church.” Geffray paused, before adding, “And that bothers me.”