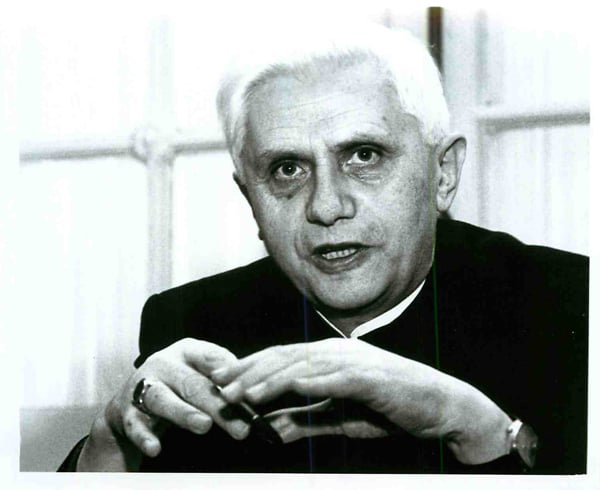 New York - The Vatican's chief theologian, Cardinal Joseph Ratzinger, gave a 50 minute talk at St. Peter's Lutheran Church on Jan. 27, 1988. He blamed contemporary biblical scholars for diluting the teaching of the Church. Ratzinger's presentation was interrupted by a dozen gay and lesbian activists who sprang to their feet and shouts "Facist! Stop the inquisition!" RNS file photo by Odette Lupis.
February 14, 2013
A. James Rudin

(RNS) Pope Benedict XVI battled severe headwinds during his eight-year reign as pontiff. The first was simply his age and physical condition. When his fellow cardinals elected him in 2005, the 78-year-old Joseph Ratzinger was the oldest candidate to be chosen in several hundred years. The modern papacy's demands of global travel and physically taxing public appearances clearly took a toll on an elderly and increasingly frail pope. New York - The Vatican's chief theologian, Cardinal Joseph Ratzinger, gave a 50 minute talk at St. Peter's Lutheran Church on Jan. 27, 1988. He blamed contemporary biblical scholars for diluting the teaching of the Church. Ratzinger's presentation was interrupted by a dozen gay and lesbian activists who sprang to their feet and shouts "Facist! Stop the inquisition!" RNS file photo by Odette Lupis.

Benedict had the unenviable task of succeeding a legendary larger-than-life figure, John Paul II, who during his 27 years as pope became the best-known person on the globe. John Paul's style, early vigor and charisma cast a constant shadow over Benedict's pontificate.

But he was not, as some critics charge, a “transitional” or an “accidental" pope. History will, however, view him as the last of the traditional European pontiffs. And that, in the end, might not be a bad thing for the church.

The most serious problem that dogged his papacy was the continuing sexual abuse scandal across an increasing number of nations. The clergy scandal was a constant malignancy within the church that eroded the moral authority of priests and bishops and increased the disenchantment of many lay people.

The scholarly and professorial pope was seemingly unable to cope adequately with the rapid technological changes sweeping throughout society. It also led to an early headache, when a quick Google search would have confirmed that one of the breakaway traditionalist bishops he welcomed back into the church was a vocal denier of the Holocaust.

That move, with others, caused both anger and concern in the Jewish community. Muslims, too, took issue when Benedict invoked a Byzantine emperor who said Islam was violent and "spread by the sword." Although Benedict is a committed champion of positive interfaith relations, several of his public remarks, statements and actions seemed out of step with that ideal.

Benedict also confronted the increasing secularization of Europe and North America, but despite his campaign against it and the "dictatorship of relativism," he had little effect in either stopping or reversing the trend.

I first encountered Ratzinger in the 1970s when he was the archbishop of Munich and the American Jewish Committee shared its concerns and criticisms of the Oberammergau Passion Play that took place in his archdiocese. Years later, I participated in a conference that he attended in Israel; in April 2008, I represented the U.S. Jewish community when I personally responded to his Passover message during his papal visit to Washington.

Upon his election, there was some concern expressed that Benedict would not devote the same passion, intellect and interest to Catholic-Jewish relations as his famed predecessor. That wasn't the case; he did not weaken the sturdy new relationship that had been established, and he visited Auschwitz, synagogues and Israel and pressed for the continuation of the interfaith achievements that grew out of the Second Vatican Council in the 1960s.

Although he sought to reconcile with the breakaway Society of St. Pius X -- and its Holocaust-denying Bishop Richard Williamson -- he nonetheless denounced the group's anti-Semitic tendencies and its refusal to accept Vatican II's “Nostra Aetate” declaration that reset the church’s relations with Jews.

Benedict perhaps will be best remembered as an intellectual, a German theologian steeped in traditional values who had the unavoidable and difficult task of following a legendary figure. He is likely to be the last of a generation of European pontiffs who were shaped by World War II, the Holocaust and even the historic reforms of Vatican II.

Neither he nor the institution he led was sure-footed in navigating the changing tides of the 21st century. Unlike Vatican II's Pope John XXIII or John Paul, he was not a papal game changer who set his church on a new course. Some of the biggest issues facing the church -- clergy celibacy, women's ordination and a shortage of priests, the role of the laity -- didn't get much attention, and they'll soon be transferred to a younger leader.

The Greek philosopher correctly warned that we never step into the same river twice; both we and the river constantly change. In 2005, Benedict stepped into a raging river of change, conflict, and even chaos. It's still too soon to tell just how well he navigated his church in the world’s churning waters.