(RNS) Will the conclave electing a new pope next month have an “Obama moment” and pick someone from Africa or Latin America or Asia for the first time in modern history?

The public seems enamored of the idea of a non-European pope, and even many cardinals — whose votes are the only ones that count — are openly pushing the idea of a “pope of color” to follow Benedict XVI, a German theologian. 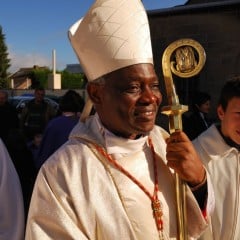 Cardinal Peter Turkson of Ghana by Haiducul via Wikimedia Commons

“I think in a way the church is always and has forever been ready for a non-European pope,” Cardinal Peter Turkson of Ghana told reporters after Benedict announced that he was resigning at the end of February.

The appeal of a non-European pope is understandable as it seems to reflect the hope that the church at the top of the pyramid would finally reflect the demographic reality of the faith on the ground, since the growing majority of Catholics live in the Southern Hemisphere.

Picking a pope from the Global South would also show that the church can embrace change — not necessarily by altering a particular doctrine but by changing the way it expresses and embodies the faith. In that sense, a pope from the developing world would be a symbol with real substance, much the way people saw Polish-born John Paul II in 1978, the first non-Italian pontiff in centuries and one who came from behind the Iron Curtain.

So why not “a black pope, or a yellow one, or a red one, or a Latin American?” as Guatemala Archbishop Oscar Julio Vian Morales wondered after Benedict’s announcement.

In reality there are several factors working against such a change, the biggest one being a structural bias that is hard to overcome.

Simply put, the College of Cardinals is gerrymandered to favor an Old World candidate. It’s set up like the U.S. Senate so that archdioceses with few practicing Catholics — like many in Europe — always have a cardinal and as much electoral weight as entire nations that have far more Mass-going Catholics but perhaps a single cardinal, if that.

The imbalance derives in part from history: The pope is pope because he is the bishop of Rome, following St. Peter, the first bishop of Rome, who tradition says was martyred there. In the early centuries of Christianity, the bishop of Rome was elected by the people and priests of the city. Later, the election was held by cardinals, who are given honorary posts in the Diocese of Rome or serve in the Vatican bureaucracy.

Even now, numerous Italian dioceses and offices in the Roman Curia still automatically come with a red hat. And because Europe was the engine of Catholicism until the last century, a bishop who’s appointed to one of its ancient or prominent dioceses also gets a cardinal’s title. It’s a tradition that has always invited some criticism.

“Is it not reasonable that they (the cardinals) be selected from every nation whose office it is to judge all nations?” St. Bernard of Clairvaux asked in the 12th century.

But it was not until the middle of the 20th century that popes started to “internationalize” the College of Cardinals, a process that continued at a slow but steady pace — and was halted by Benedict.

A German scholar who made reviving Catholicism in Europe a priority, Benedict backed his agenda by making the college more European and more curial at the expense of the Global South. In the conclave that elected Benedict in 2005, just over 16 percent of the cardinals were Italian; in next month’s election, 24 percent of them will be Italian.

“No wonder the College of Cardinals is increasingly seen as the firewall against change in the church,” John Thavis, former Rome bureau chief for Catholic News Service and author of a new book, “The Vatican Diaries,” wrote on his conclave blog. “For all the talk about Catholicism’s global expansion, far-flung church communities have relatively little voice when it comes to choosing and advising a pope.”

But the obstacles to electing a non-European are more than just numerical.

There’s the language barrier, for example. Italian is the lingua franca of the Vatican, and the Italians — and especially the members of the Roman Curia, who can be from other countries — all speak Italian while cardinals coming from other regions generally do not. The Vatican is hard enough to navigate but impossible if you can’t ask for directions.

Cardinals from outside Europe (the North Americans are an exception) also just don’t get to the Vatican much or have the chance to get acquainted with each other. They often know so little of their fellow candidates that they have been known to ask journalists for guidance.

And of course the cardinals working at the Vatican tend to know everyone, and everyone knows them. So in retrospect, it was no surprise that Cardinal Joseph Ratzinger was elected since he was a familiar and trusted presence who had worked in the Curia for decades.

“They tried to find an alternative to Ratzinger, but they couldn’t,” a senior Vatican official said after the conclave. This time, however, there are some factors that could scramble the usual calculus.

AN OUTSIDER ON THE INSIDE?

One is that a number of European and North American cardinals have themselves openly expressed support for turning to a non-European.

Another thing to remember is that if the cardinals from the Southern Hemisphere are not as well-organized as those in Rome, history and recent events (especially last year’s infamous Vatileaks scandal) have shown that the Curia, and the Italians in particular, are often more interested in defeating each other than in supporting one of their own.

That could lead to a possible compromise that would see the cardinals elect a non-European — but someone who has serious experience in Rome. Such an outcome would, in effect, give the papacy to a Latin American or African without actually deviating from the old playbook.

As Robert Mickens, Vatican correspondent for The Tablet of London, wrote in January: “It’s not clear that it would make any difference to have a pope with an African or Latin American face if he turned out to be more Roman than Caesar.” 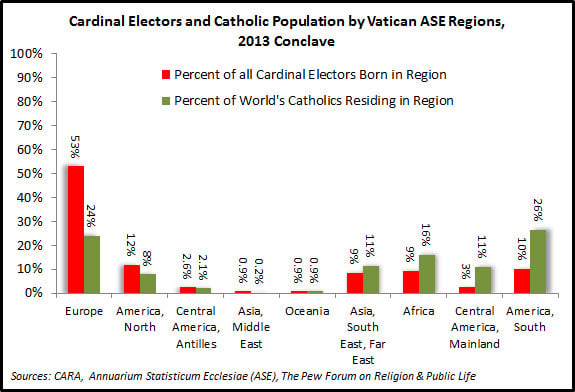