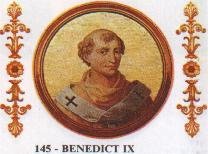 He was a puppet pope, installed by his powerful family at a time when rival clans ruled Rome. The young man seemed uninterested in religious life, rushing through ordination only after his election to the Throne of St. Peter in 1032.

Benedict IX squandered the papacy’s moral and financial riches in bordellos and banquet halls. His violence and debauchery “shocked even the Romans,” said philosopher Bertrand Russell, which is kind of like being busted for lewdness in Las Vegas.

St. Peter Damian called Benedict IX a ”demon from hell in the disguise of a priest.” The Catholic Encyclopedia labels him a “disgrace to the chair of St. Peter.” He was the first Pope Benedict to resign, selling the papacy for gold in order to marry. He later tried to reclaim the holy office and served three stints as pope between 1032 and 1048.

Nearly a millennium later, the pious and bookish Pope Benedict XVI seems completely contrary to his notorious namesake. Even if his papacy has stumbled at times, by all accounts the current Benedict has led a chaste life devoted to serving his church.

But besides his name, by resigning on Thursday (Feb. 28) Benedict XVI shares at least one additional attribute with his precursor. Both Benedicts — the sinner and the scholar — brought St. Peter’s throne back down to earth, albeit in very different ways.

Vicar of Christ. Pontifex Maximus. Patriarch of the West. The papacy has accumulated a host of honorifics over its 2,000-year history. Those titles seem to set the pope apart as a spiritual Superman, not quite God, but closer than the rest of us.

Under John Paul II, the papal mystique magnified. Even during the last difficult days when he suffered from Parkinson’s disease, some Catholics said that John Paul could no more resign than Jesus could come down from the cross.

“We become so incredibly attached to and even idolatrous of the papacy,” said Christopher Bellitto, an expert on Catholic history at Kean University in New Jersey. “But the pope is no more or less holy than my mother.”

A mistaken notion of papal infallibility often underlies the pope-worship, scholars say.  A running joke after Benedict’s resignation quipped that he had changed his Facebook status from “Infallible” to “It’s complicated.” Popes are actually only infallible when making certain doctrinal statements, and that authority has only been invoked twice.

By becoming the first pope in six centuries to resign, Benedict cracked the seal between the sacred office and the mortal men who occupy it, Catholic scholars said.

“All those unique titles that seemed to place the papal office above and beyond all other offices and ministries in the church suddenly have to yield to what their occupants all have in common: a fragile, sinful, and mortal humanity,” the Rev. Joseph Komonchak, a prominent church historian, wrote recently in Commonweal magazine.

“The pope — and not just this one — loses something of his sacral apartness. He rejoins the rest of us.”

Like the rest of us, some popes have been saints, and some scoundrels. Even St. Peter, the chief apostle and first pope, according to Catholic tradition, had moments of weakness and doubt.

During the Middle Ages, the papacy held great wealth and worldly power, which often attracted the wrong kinds of candidates, writes the Rev. John O’Malley in his book “A History of the Popes: From Peter to the Present.”

“The popes of Rome faced particular temptations almost from the earliest days,” writes O’Malley. More than a few succumbed. 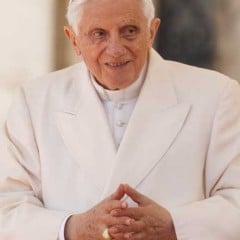 But Catholic theology holds that even bad popes do not undermine the office or break the line of apostolic succession, said Monsignor Robert Wister, professor of church history at Seton Hall University’s Immaculate Conception Seminary School of Theology.

“If someone holds an office in the church, even if they are a bad person, the exercise of that office is not compromised,” Wister said.

Some scholars said Benedict’s stunning resignation will actually strengthen the papacy by allowing younger men to serve — and, perhaps, older men to leave.

But other scholars do not believe his example will be followed by future popes.

“The pope doesn’t just sit in his chair and deliver documents in the morning and go golfing in the afternoon,” said Jon Sweeney, author of “The Pope Who Quit,” a biography of Celestine V, who left the papacy five months after his election in 1294. “That seems to be what Benedict XVI is suggesting might change, but I don’t see it becoming the norm.”

In any case, the papacy will never be a normal 9-to-5. Since a dove alighted on the shoulder of Pope Fabian in the third century, Catholic tradition has held that the Holy Spirit guides the selection of Peter’s successor.

That doesn’t mean the pope is always an inspired choice, as the example of Benedict IX makes clear. “There are too many contrary instances of popes the Holy Spirit obviously would not have picked!” Benedict XVI has said. Free will and human foibles sometimes thwart the Spirit.

But even the papacy of Benedict IX had a somewhat happy ending. Legend has it that he repented and lived his last days in a monastery. After his excesses, reformers seized the papacy from Roman clans and rehabilitated the office.

“Christ said the church would endure,” Wister said. “He didn’t say it would be easy.”