WASHINGTON (RNS) A bronze statue of civil rights heroine Rosa Parks was unveiled at the U.S. Capitol Wednesday (Feb. 27), a day for members of her African Methodist Episcopal Church to celebrate one of their own. 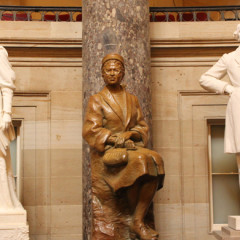 A bronze statue of civil rights heroine Rosa Parks was unveiled Thursday at the U.S. Capitol, a day for fellow members of her African Methodist Episcopal Church to celebrate one of their own. RNS photo by Adelle M. Banks.

President Obama, capping an hourlong ceremony in Statuary Hall, recalled the desegregation of public buses in Montgomery, Ala., after a yearlong boycott that was sparked by Parks’ simple act of defiance: refusing to move to the back of the bus.

“And with that victory, the entire edifice of segregation, like the ancient walls of Jericho, began to slowly come tumbling down,” he said before hundreds gathered just outside the Capitol Rotunda.

As Parks was hailed for her civil rights achievements, members and leaders of her African Methodist Episcopal Church celebrated Parks taking her place among the monuments to American icons from every state and walk of life.

Parks was a stewardess, who helped with Communion and baptisms in her local AME congregation in Detroit, and also a deaconess, the highest position for a laywoman in the denomination. She died in 2005 at age 92.

“It’s special to us because the AME Church was founded, really, on issues of social justice and equality and so her actions actually help us to keep that legacy alive even to this day,” said Bishop Reginald T. Jackson, chairman of the AME Church’s Commission on Social Action. Each state can send two statues of famous citizens for display in the Capitol, but the 2,700-pound Rosa Parks statue was commissioned by Congress — the first since 1873, and at nine feet tall, the first full-sized statue of an African-American in the Capitol complex. A bust of the Rev. Martin Luther King Jr. has been displayed in the Rotunda since 1986.

Parks’ religious ties were not lost on the political leaders who gathered to honor her in a ceremony that was bookended by prayers by the Senate and House chaplains.

House Minority Leader Nancy Pelosi noted that Parks’ mother sang her a hymn of freedom that became “the anthem of her life,” while House Speaker John Boehner recalled she held to the gospel and said God “was everything to me.”

The AME Church started a nonprofit in hopes of acquiring Parks’ archives, which have been housed for several years in a warehouse of New York auction house Guernsey’s. Parks’ estate has been the subject of a legal debate, but the estimated $10 million archive remains unsold.

Within the archive is evidence of Parks’ faith, from sermon notes on church bulletins to her white stewardess dress and black stewardess hat. “We are still hopeful that the AME Church can be a part of preserving Rosa Parks’ legacy,” said Jackie Dupont-Walker, director of the church’s Social Action Commission.

AME Church officials claim Parks as a member of their denomination, but other churches have paid her tribute, most notably the Washington National Cathedral with a new stone carving of Parks. In the 1980s, Parks visited Harlem’s storied Abyssinian Baptist Church when the Rev. Derrick Harkins was a member of the staff. “Of all of the incredibly celebrated luminaries, as you can only imagine we would often have at the church, I can honestly say that her being there really was for so many people an incredible high point,” recalled Harkins, now pastor of Nineteenth Street Baptist Church in Washington.

“The fact that Rosa Parks approached her calling to the civil rights movement with that unique reserve and dignity — I think a lot of people, a lot of church folk said, ‘You know what? That’s the kind of resolve that I can have.’”

AME leaders have been pushing parishioners to buy the Rosa Parks commemorative postage stamp. Retired AME Bishop Carolyn Tyler Guidry, who had to call around before finding a post office that hadn’t sold out, said Parks wrote about being inspired by Bishop Richard Allen, who founded the denomination after being born a slave.

“She talks about Richard Allen being her hero,” said Tyler Guidry. “That was something that inspired and encouraged her as a member of the African Methodist Episcopal Church. This was her heritage.”

Tyler Guidry said she looks forward to bringing her granddaughters on a pilgrimage to pay homage at the new statue.

“She is one that I would take my granddaughters to see and to talk about,” she said, “because I want them to be encouraged as young African-American women to stand up for what you believe and to make your life count for something.”