(RNS) Amid all the fevered speculation about who might succeed Pope Benedict XVI, one possibility seems particularly tantalizing: that the conclave could elect an African to be the first black pontiff in the nearly 2,000-year history of the papacy.

But in all that time has there really never been a black pope? Or an African pope? It depends on what you mean by “black” and by “African,” and answering those questions requires a bit of ancient history and some modern context.

First, the history: While it can seem to the contemporary mind that the papacy is a purely European institution, and predominantly an Italian one to boot, the early popes in fact reflected the diversity of the early church – a community that was born in the Middle East and spread around the Mediterranean basin, from Greece to Rome and the Iberian peninsula and with great success to North Africa.

“North Africa was the Bible belt of early Christianity,” said Christopher Bellitto, a church historian at Kean University in New Jersey. “Carthage was the buckle,” he added, referring to the city located in modern-day Tunisia.

According to the sixth-century Liber Pontificalis, the earliest known record of the popes, Victor was from North Africa, while Miltiades and Gelasius likely were born in Rome to families of African origin.

Interestingly, Victor was the first pope to speak Latin because Christians in Rome were still using Greek in the liturgy. As one historian has written, it was “remarkable … that Latin should have won recognition as the language of African Christianity from the outset, while the Roman church was still using Greek.”

But were these three African popes “black” in the sense that we would define race today? And did it matter back then?

The Rev. Cyprian Davis, a Benedictine priest who is a leading historian of African-American Catholicism, notes that by Pope Victor’s time, the Roman aristocracy had large holdings in North Africa. It’s not clear, however, whether these so-called African popes came from those families or from the rural, somewhat darker-skinned indigenous population known as the Berbers.

Davis said the best bet for what we would consider a “black” pope is probably Victor, but he added that the church and the empire of those early centuries were a mosaic of colors and ethnicities.

“It’s important for us to look and say that yes, the early papacy was not white. No, it was much more diverse than you might think,” Davis said.

Moreover, race as we think of it today did not have quite the same meaning back then.

“When you say ‘black pope,’ you have to think Roman Empire, not African-American,” as Bellitto put it. Some popes in those days – along with many renowned saints and martyrs and bishops like St. Augustine of Hippo – probably looked more like modern Arabs than any pontiff of the last millennium. 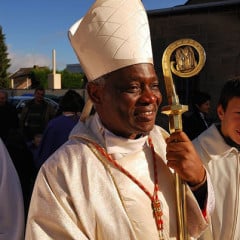 The upshot of all this is that if the cardinals elect a black African this month, it would be a big deal. The main African candidates — like Cardinal Peter Turkson of Ghana — are from sub-Saharan Africa, and choosing any of them would represent a historic first for the church, geographically and racially.

Above all, it would send a signal that the church was moving into the future, not just recovering the past. Catholics in Africa and other regions of the Southern Hemisphere where the church is growing could see Rome as validating their central role, while African-American Catholics in the U.S. might see a black pope as a shot in the arm to their small but vital community.

“I don’t want to say that we blacks have arrived again, and what was once, now we’re back!” said Davis with a soft laugh. But, he continued, “I’m sure black Catholics like myself would think it’s a wonderful thing.”