The U.S. cardinals may have been barred from holding their popular daily press briefings but the war of words between the Italian cardinals and their allies – who are suspected of engineering the silencing – and the Americans only seemed to escalate.

On Friday, Vaticanista Marco Tosatti of La Stampa, an Italian daily that has been a chief conduit for Roman curialists who want to plant select information anonymously, wrote a piece ripping the American cardinals for insensitivity in holding briefings and telling the other cardinals, in effect, “We are here, and we are the ones running the conclave.”

Tosatti’s post was provocatively titled “Conclave: USA uber alles,” a reference to the German national anthem that begins, “Deutschland, Deutschland über alles,” or “Germany, Germany, over all.” And he included a picture of New York Cardinal Timothy Dolan, the most visible and vocal of the U.S. cardinals, pointing in a characteristically exuberant – or perhaps aggressive, from the Italian perspective – way.

Tosatti went on to say that by holding their own briefings the American cardinals were tainting the “climate of reflection and meditation that should accompany a serious choice” like electing a new pope.

That of course could strike some as an especially rich criticism coming from the newspaper that has been retailing all sorts of private details from the General Congregations, the confidential pre-conclave meetings that have been taking place all week behind closed doors.

In fact, a day earlier Phil Pullella, the longtime Vatican correspondent for Reuters, pointedly asked the Vatican spokesman, the Rev. Federico Lombardi “why the American cardinals are doing penance for the sins of the Italian cardinals.”

“The American cardinals did not leak anything in their briefings,” Pullella noted. “The Italian cardinals did leak and are continuing to leak things outside the General Congregations. Does this not send a message of confusion?”

Good question, and it was never answered.

Some of the American churchmen and their staffers privately fume at being shut down but they are trying to keep the flow of on-the-record information coming as much as possible, which can be read as an implicit rebuke to the Italian effort to run things the way they have always done – on their terms, with home field advantage.

“Stopping the leaks will be one challenge in a media culture which lives on leaks. It’s just the way to do business here in Rome and has been for years,” Sister Mary Ann Walsh, a spokeswoman for the cardinals here in Rome wrote in a blog post on Thursday. 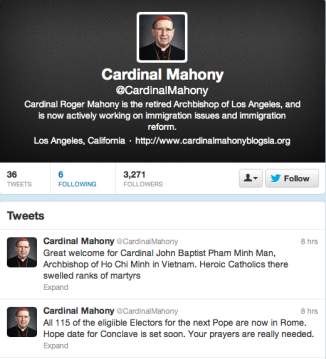 Mahony continued to post on his personal blog, and on Thursday he kept his Twitter feed humming, writing: “Days of General Congregations reaching a conclusion. Setting of date for Conclave nearing. Mood of excitement prevails among Cardinals.” Screenshot courtesy https://twitter.com/CardinalMahony.

Walsh is continuing to arrange press briefings – with church experts rather than cardinals – and at least one U.S. cardinal, Roger Mahony of Los Angeles, is interpreting the muzzling edict rather liberally.

Mahony continued to post on his personal blog, and on Thursday he kept his Twitter feed humming, writing: “Days of General Congregations reaching a conclusion. Setting of date for Conclave nearing. Mood of excitement prevails among Cardinals.”

Early Friday he continued to ramp up expectations that the conclave was nearing, writing that the last of the 115 cardinal-electors, Cardinal John Baptist Pham Minh Man of Vietnam, had arrived. “Hope date for Conclave is set soon.”

Meanwhile, German Cardinal Paul Josef Cordes, who has worked in the Vatican for years, seemed eager to get it over with.

“Hopefully it will be a short conclave and start very soon,” Cordes told the German daily Bild. “I would compare it with a visit to the dentist – you want to get everything over with quickly.”

Electing a pope like a root canal? Now there’s a memorable analogy.

But it may not e the American view. La Stampa on Friday published a pre-blackout interview with Washington Cardinal Donald Wuerl, who predicted the conclave “won’t be short. Much will depend on the first days, because there is no clear choice among the candidates. I am trying to get informed as my brothers do, through conversations within and without the General Congregations. All is in God’s hands.”

That may be the case, but as my colleague Alessandro Speciale reports, the Vatican wants to make sure that the leaks from the General Congregations don’t continue during the conclave itself.

To that end, Italian media reports Friday said that the cardinals will be subjected to unprecedented security measures to stop them from leaking information from within the Sistine Chapel. In the 2005 conclave a German cardinal reportedly texted that Joseph Ratzinger had been elected to a German television station, which announced the new pope even before the famous “Habemus Papam” proclamation from St. Peter’s.

Among the new security measures: during the conclave, cardinals will be searched four times a day: when they exit the Santa Marta residence inside the Vatican in the morning and the afternoon, and before entering the Sistine Chapel for each session of voting morning and afternoon.

A “Faraday cage” to disrupt any electronic field has also reportedly been installed over Santa Marta and the Sistine Chapel, while cars with jammer devices will follow the minivans used to drive cardinals from their residence to the chapel.

The cars will continue to be driven through the Vatican gardens as votes progress to add extra security.

At Thursday’s official Vatican briefing, many questions focused on how to plug the leaks, and Father Lombardi’s best answer was that they would simply have to trust in the good faith of the cardinals.

But it seems they also want to verify that their trust is being repaid.

Signs of the Times
Pope Francis appoints cardinals, setting stage for election of his successor