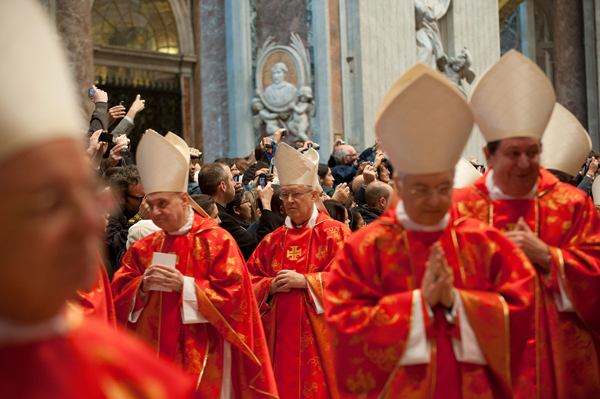 VATICAN CITY (RNS) As 115 cardinal-electors solemnly processed into the Sistine Chapel on Tuesday afternoon, with a cry of “Extra omnes!” and the latest high-tech jamming devices cutting them off from the world, the buzz outside the Vatican over who would eventually emerge as pope grew deafening. 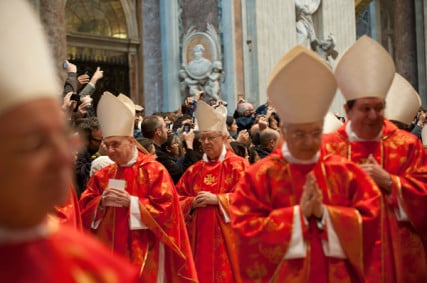 Everyone had theories, many had favorites, and most declared it all so unpredictable that the winner – or even how long it would take to find him – was anybody’s guess.

“We are living through an extraordinary conclave,” Marco Tosatti wrote in La Stampa, the Italian daily whose insider coverage of the pre-conclave meetings read like a tip sheet for papal bookies.

“If we look at the history of conclaves over the last century, never has there been such a range of choices, and such uncertainty over the outcome up to the moment that the doors of the Sistine Chapel closed,” he said.

In fact, the latest lines were varied and morphing all the time, a feast of permutations for Vaticanisti who parse papal elections the way sci-fi geeks deconstruct a new installment of “Star Wars.”

National Catholic Reporter’s John Allen, a top Vaticanologist, perceived four main camps pushing different types of candidates: a pope who would overhaul the Roman Curia, the pontiff’s dysfunctional civil service; a “pastoral” pope who would heal the divisions in the church; a pope from the Global South who would represent the growing majority of the world’s 1.2 billion Catholics; or an “evangelical” pope who would take the church’s teachings to the public with gusto.

An even simpler calculus pitted cardinals from the Curia and Italy who are seeking to defend their turf against cardinals from the rest of the world who are so fed up with the Curia’s antics that they want someone -- anyone -- who could whip the pope’s bureaucracy into shape. “Romans vs. the Reformers,” as a New York Times headline put it.

The curialists are in a strong position: They theoretically represent a bloc of 40 votes, enough to halt any drive by an outsider to reach the two-thirds threshold for victory, or 77 votes. And Italians boast the largest single national contingent by far, with 28 cardinals. How is any candidate to overcome that math?

Then again, Vatican politics make strange bedfellows, too, and there were last-minute signs that the reformers were rallying around Cardinal Angelo Scola of Milan as an Italian who could clean house – and draw 40 or even 50 votes on the first ballot. The Romans, meanwhile, were looking to champion either Brazilian Cardinal Odilo Scherer or Argentine Cardinal Leonardo Sandri. 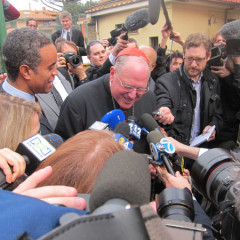 On Sunday the archbishop of New York Timothy Dolan continued to charm the citizens of the Eternal City (and many in the media, who probably see him as more papabile than his fellow cardinals do) as he celebrated mass at the parish of Our Lady of Guadalupe in a middle-class Roman neighborhood. RNS photo by David Gibson

And if those two forces canceled each other out in early voting, Canadian Cardinal Marc Ouellet, who holds a top position in the Curia, and Austrian Cardinal Christoph Schoenborn were rumored to be compromise candidates. Even Argentine Cardinal Jorge Maria Bergoglio, runner-up in the 2005 conclave, was rising in the ranks, with New York Cardinal Timothy Dolan or Boston Cardinal Sean O’Malley still mentioned as viable American possibilities. Hungarian Cardinal Peter Erdo was also getting a look.

On and on it went, with further combinations and permutations, shifting alliances and potential deals, for those who cared or could keep it straight.

Yet at the end of the day, one surprising reality surfaced in every scenario: Whatever the cardinals ultimately decided, it would probably not end with an “Obama moment.” There would be no “pope of color” walking out on the balcony of St. Peter’s Basilica to bless an expectant crowd and thrill a global audience.

Remember all the talk about Cardinal Peter Turkson of Ghana as the first black pope? Not even whispers by Tuesday. Cardinal Joao Braz de Aviz of Brazil? He works in the Curia, but sharply criticized his colleagues during the pre-conclave General Congregations and seemed out of the running.

Honduran Cardinal Oscar Rodriguez Maradiaga, a perennial also-ran, “has no base,” as one longtime Vatican observer put it. Cardinal Luis Tagle of Manila? He was everyone’s favorite – but apparently too young, at 55, and too unknown to gain traction with his fellow cardinals.

Instead, you had Scola, an Italian, running strong, with Latin Americans like Scherer and Sandri close behind. Scherer is the son of German immigrants to Brazil who spent years in the Curia and sits on the board of the scandal-plagued Vatican Bank, and Sandri is the son of Italian immigrants who left Argentina for Rome in 1970 and never returned. They are “Latin Romans” as much as Latin Americans.

Similarly, Bergoglio is the son of Italian immigrants and Ouellet is a French-Canadian who is as Old World as any Roman. And Schoenborn, a disciple of Pope Emeritus Benedict XVI’s, would be the second German-speaking pope in a row; Erdo would be another Eastern European, though without the charm of the Polish pope, John Paul II.

In short, despite a month of heightened speculation about a historic shift, papal politics instead seemed to be reverting to form.

Heading 'Back to the Future'

All signs pointed to a “Back to the Future” conclave that was looking for a reliable hand after the years of crisis on Benedict’s watch, a reassuring presence amid the “instability” – a word heard frequently around the Vatican these days – created by his shocking resignation.

On the other hand – and there is always another hand when it comes to something as secret and unpredictable as a papal election – the history of conclaves show that if the early leaders do not win fairly quickly, all bets are off. Front-runners that falter never regain momentum, and almost anyone could emerge from the crowded field. Members of the Catholic community gather in front of St. Peter's basilica after mass during the first day of the conclave on March 12, 2013 at the Vatican. Once announced, the new pope will step out onto the balcony above them. RNS photo by Andrea Sabbadini

On Tuesday evening, the cardinals took the first ballot, which is largely symbolic as each one votes for their ideal candidate, dispersing them like the black smoke that drifted into the cloudy night sky over St. Peter’s Basilica. But that vote would give the cardinals an initial sense of how things might shake out on Wednesday, and in the days of uncertainty that would lead up to the long-awaited white smoke.

“Last time, there was a figure with real weight, three or four times more so than the rest of the cardinals,” French Cardinal Philippe Barbarin said on Sunday, referring to Cardinal Joseph Ratzinger, who led from the start in 2005 and won on the fourth ballot, in just 24 hours. “It’s not like that now.”

“Therefore, the choice has to be made among one, two, three, four … a dozen candidates. Right now we don’t know anything, we have to wait for the results of the first ballot.”