VATICAN CITY (RNS) Black smoke from the chimney atop the Sistine Chapel signaled that the first day of the conclave ended without the election of a new pope. 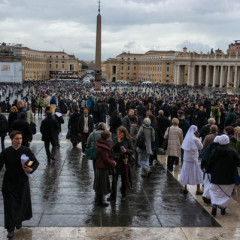 A view of St. Peter’s square on the first day of the conclave (March 12, 2013) at the Vatican. RNS photo by Andrea Sabbadini.

Even if the first-round outcome was largely expected, thousands of people on Tuesday (March 12) braved the inclement Roman weather to wait for the result of the vote. They slowly filled up St. Peter’s Square as the evening progressed, with their eyes fixed on the small chimney.

Cries of disappointment erupted from the crowd when the black smoke appeared instead of the white smoke that would herald a successful election.

Analysts say the first vote will allow cardinals to evaluate the candidates’ strengths and potential following before the first full day of voting on Wednesday, when up to four ballots are expected. A two-thirds majority of 77 out of 115 cardinal-electors is needed for a new pope to be elected.

The wait was briefly disrupted by some activists of the Femen women’s rights group. The topless women were quickly removed from St. Peter’s Square by Italian police.

On Tuesday, cardinals voted only once to find a successor to Pope Benedict XVI, at the end of a series of solemn ceremonies that marked the beginning of the closed-door conclave. Earlier in the afternoon, the doors of the Sistine Chapel closed behind the cardinals, marking the official start of the conclave.

The cardinal-electors walked in procession into the Sistine Chapel, singing hymns and invoking the Holy Spirit, before filing under Michelangelo’s “Last Judgment” and taking a solemn oath of secrecy on everything that will happen during the conclave.

At the end of the oath-taking ceremony, the master of papal ceremonies, the Rev. Guido Marini, ordered the “extra omnes” (Latin for “everybody out”).

Cardinals will be sequestered inside a Vatican residence until a candidate receives the two-thirds majority needed for election to the papacy.

In accordance with church law, the cardinals heard a meditation on their “grave duty” and on the “need to act with right intention for the good of the Universal Church,” before holding the first vote for the new pope. The meditation was delivered by retired Maltese Cardinal Prosper Grech. 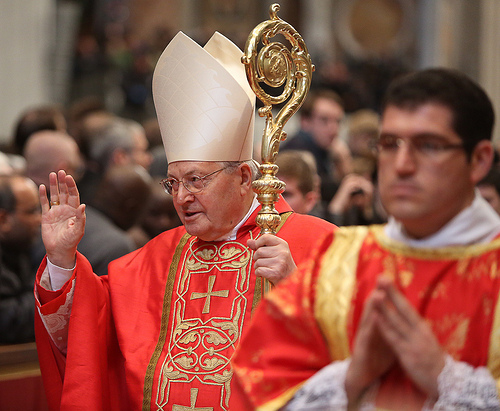 In the morning, at a solemn Mass in St. Peter’s Basilica, the Catholic Church’s most senior cleric told the 115 cardinals to work together for the “unity of the church.”

The “Pro Eligendo Romano Pontifice” Mass (“For the election of the Roman Pontiff” in Latin) is generally considered to set the tone for the conclave that immediately follows.

In 2005, then-Cardinal Joseph Ratzinger’s strong condemnation of modern “ideological currents” — “from Marxism to liberalism … from collectivism to radical individualism; from atheism to a vague religious mysticism” — at the Mass paved the way for his election to take the helm of the church after the 27-year reign of John Paul II.

This time, though, the dean of the College of Cardinals, Angelo Sodano, carefully steered away from any direct remarks on the challenges that the new pope will have to face.

Sodano is over 80 and thus, unlike Ratzinger in 2005, will not be part of the conclave.

In his homily, the former secretary of state under John Paul II closely followed the biblical texts. “Each of us must work to build up the unity of the church,” he said, commenting on a passage by St. Paul, “each of us is therefore called to cooperate with the Successor of Peter, the visible foundation of such an ecclesial unity.” 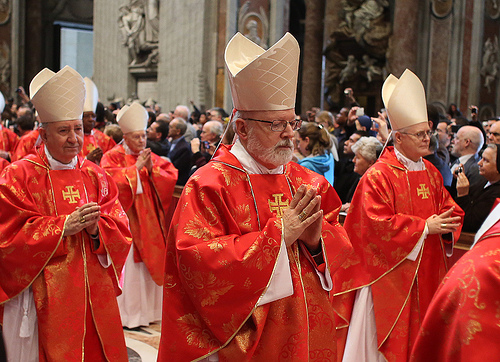 Cardinal Sean O’Malley of Boston, center, processes into St. Peter’s Basilica with other cardinals for a special Mass prior to the conclave to elect a new pope. Photo courtesy George Martell/The Pilot Media Group

Reports in the Italian press described the cardinals as deeply divided following a series of daily meetings in the week leading up to Tuesday’s conclave.

According to La Stampa and La Repubblica newspapers, during the cardinal’s last meeting on Monday, there was a heated exchange between Cardinal Tarcisio Bertone, Benedict’s No. 2 official as secretary of state, and Brazilian Cardinal Joao Braz de Aviz over the running of the scandal-scarred Vatican Bank.

Sodano told cardinals to pray that the future pontiff continues “promoting justice and peace” as his predecessors did. He also thanked the “beloved and venerable” Benedict XVI for his “brilliant pontificate.”

Posted in
Institutions
Support RNS and get your donation doubled

News
Disgraced Cardinal Becciu seeks redemption by putting up a fight
Signs of the Times
US Catholic bishops’ response to McCarrick report is sad but predictable
News
Vatican cardinal says ouster deprived him of possible papacy
Signs of the Times
McCarrick scandal shows why popes, like John Paul, should not be canonized
News
A blue surprise? As Arizona trends toward Biden, Latino voters stand out