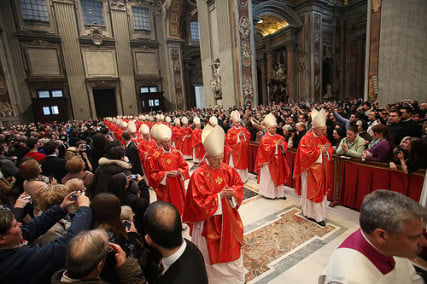 Before the opening of the conclave today, March 12, cardinals attend a solemn Mass at St. Peter’s. Photo Courtesy of BostonCatholic via Flickr.

The winner of our Sweet Sistine Pope Madness tourney is … Cardinal John Onaiyekan of Nigeria.

Cardinals prayed at a solemn Mass in St. Peter’s Basilica preceding the opening of the conclave, which happens at about 5 p.m. today EST.

Alessandro Speciale — one of our two men in Rome — writes that the Catholic Church’s most senior cleric told the 115 cardinals tasked with electing Pope Benedict XVI’s successor to work toward “unity of the church.”

Cardinals mom: “Don’t pick my boy.” Eleonore Schoenborn, mother of Austrian Cardinal Christoph Schoenborn (often mentioned as a serious possibility for the next pope), hopes the other cardinals won’t choose her son. She worries that the trip to Rome would be too much for her and she would never see him again.

Speciale also writes about other final preparations are being made for  the conclave, including the return of the pope’s closest aide, Archbishop Georg Gaenswein, aka “Gorgeous Georg,” to Vatican City.

Because they’re starting later in the day, the cardinals will take only one vote for pope today, compared to the four scheduled for a typical voting day, when there are two morning and two afternoon ballots. So today, expect black smoke.

But when there is white smoke, there will also be a new tradition at the Vatican, when the chosen man spends a few moments in Eucharistic adoration before he is presented to the world on the central balcony of St. Peter’s Basilica.

On the scene, our own David Gibson says that conservative cardinals have their heart sets on a super hardliner, because they thought Cardinal Ratzinger was going to be a tough guy, and he was more of a papal pussycat.

One way to feel more a part of the action is to take a tour via the BBC’s “virtual conclave,” or, it’s not too late to join the half million people who have adopted a cardinal, a man you can pray for during the conclave. You don’t get to pick your cardinal — he’s randomly assigned to you.

Rev. Thomas Reese writes in the National Catholic Reporter that a deadlocked Congress may have something to learn from the papal conclave, which is likely to pick a pope far faster that the American legislature hammers out a budget. He reminds that conclave means “locked with a key.”

Omar Sacirbey fills us in on what Muslims hope for in a new pope, and many like the idea of a pontiff more like John Paul II than Benedict XVI.

Muslim and civil rights organizations say that the New York Police Department program to secretly monitor Islamic communities has fomented so much fear and suspicion that some Muslims find it difficult to lead normal lives.

Clergy from Newtown, Conn. are urging colleagues around the nation to sign on to a letter to the Senate Judiciary Committee demanding an assault weapons ban and other gun control measures. Thousands have heeded the call from all 50 states. Read the letter here.

Evangelicals and other religious groups are playing an increasingly important role in the push for immigration reform, writes Melissa Steffan of Christianity Today, on the heels of a big Obama-Evangelicals meeting on the topic.

Reconstructionist Jews have elected Rabbi Jason Klein of Maryland as the new leader of their movement, one of the most progressive major branches of Judaism. He becomes the first openly gay man to lead a national rabbinic association in the U.S.

Jonathan Turley notes that Saudi Arabia, which beheaded 69 people last year, is considering a ban on the official punishment because they lack enough swordsmen.

We’ll keep you up to date on the conclave and the religion news you want to know from the rest of the planet. Sign up for the Religion News Roundup. It’s free, and all we need is your email address in the box below.