The college of cardinals may still be undecided, but the people have spoken.

The Bishop of the Bracket, the Victorious Vicar, the People’s Pope is …. Cardinal John Onaiyekan of Nigeria. In the final round of Sweet Sistine, Onaiyekan defeated Cardinal Marc Ouellet of Canada 54%-46%.

Nearly 40,000 votes were cast in our Sweet Sistine tournament, which was covered by the NBC Nightly News, NPR, USA Today and many other media outlets. We owe a big thanks as well to the many readers who voted and shared Sweet Sistine with friends.

A favorite comment came from Fark.com, which we’ll paraphrase as: “The guys from the Knights of Columbus fill out a bunch of brackets, but a nun always win the pool by making her picks according to vestment color.”

Now to the man of the hour… 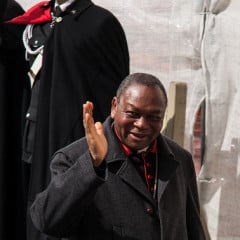 Onaiyekan isn’t even listed in Paddy Power’s pope-betting field, which means the Irish bookmakers think the Nigerian is less likely to become pontiff than his countryman Cardinal Francis Arinze (who’s not part of the conclave because he’s over 80), Bono (also not part of the conclave) and Father Dougal Maguire (not a real person).

Still, some Vaticanistas say Onaiyekan, who was made a cardinal in 2012,  has an outside shot at the papacy. Pope Emeritus Benedict XVI appointed him to several key Vatican roles, and Pax Christi International named the 69-year-old its Peace Laureate last year for working to relieve tensions between Muslims and Christians in Nigeria.

Reader Gerry McIntyre tells us: “A lot of us had met/knew John Onaiyekan as a young bishop in Nigeria and have followed his career. His rise in the hierarchy has not changed him significantly; he is still immensely approachable and natural and unaffected (relatively rare). And he is always pastorally motivated. He would be a vast improvement.”

We’d love to know what the rest of our readers think of Onaiyekan’s victory, so please feel free to comment below. And while you’re here, check out our other stories: