VATICAN CITY (RNS) Last Sunday night (March 10), the Rev. Thomas Rosica was walking through the Piazza Navona in Rome’s historic center when he bumped into Cardinal Jorge Bergoglio, who he has known for years. Bergoglio was walking alone, wearing a simple black cassock and he stopped and grabbed Rosica’s hands. 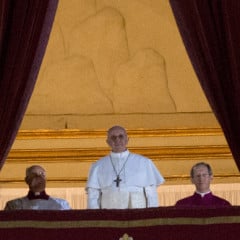 “I want you to pray for me,” the Argentine cardinal told Rosica, a Canadian priest who was assisting as a Vatican spokesman during the papal interregnum. Rosica asked him if he was nervous. “A little bit,” Bergoglio confessed.

He had reason to be worried. Two days later, on Tuesday evening, he and 114 other cardinals entered the conclave to elect a successor to Benedict XVI; a little more than 24 hours and five ballots after that, Bergoglio emerged on the balcony of St. Peter’s Basilica as Pope Francis.

It was a surprising outcome, and even if Bergoglio suspected something was up, few others did, including many of the cardinals in the Sistine Chapel with him.

“I think it all came together in an extraordinary fashion,” Chicago Cardinal Francis George told the Chicago Tribune. George said Bergoglio’s name had not surfaced as an option in the week of closed-door discussions among the cardinals before the conclave, and Bergoglio had also dropped off the radar of most journalists. He was 76, and many cardinals said they would not vote for someone older than 70. Bergoglio was also reportedly the runner-up to Benedict in the conclave of 2005 and unlikely to return as a candidate.

“I wouldn’t have expected it to happen either this fast or even the way it developed in terms of the choices available to us,” George said. “I believe the Holy Spirit makes clear which way we should go. And we went that way very quickly.”

The Holy Spirit, yes, but other forces also contributed to the unexpected result. And despite the cone of silence that is supposed to remain over all proceedings inside the conclave, leaks in the Italian press and interviews with various cardinal-electors have begun to give a clearer picture of how this 28-hour conclave unfolded.

What happened, in short, is that during the first “shake out” ballot on Tuesday evening, Bergoglio’s name drew a surprising number of votes, suddenly putting him out there as a potential candidate.

“Cardinal Bergoglio wouldn’t have become pope in the fifth ballot if he had not been a really strong contender for the papacy from the beginning,” Austrian Cardinal Christoph Schoenborn told reporters.

Until then, the field had been considered fairly open, with two main camps each looking for a champion: There were those who wanted a pope who would reform the Roman Curia, the papal bureaucracy — and preferably someone from outside Europe to represent the church’s demographic shift to the Southern Hemisphere. Then there were the electors who wanted to defend the Curia, and they were joined by some who also hoped to keep the papacy in Europe, or even return it to an Italian.

The “reform” camp had no clear champion but a dozen or more possibilities. They reportedly wanted someone from outside Europe, in particular a Latin American, but weren’t sure who.

The Roman camp, on the other hand, had apparently begun to lean toward Brazilian Cardinal Odilo Pedro Scherer, who was born of German immigrant parents and had long experience in the Curia. That made him a plausible Southern Hemisphere candidate, but one with strong European and curial ties.

In the days leading up to the conclave, however, Cardinal Angelo Scola of Milan had increasingly emerged as an apparent front-runner because he was seen as an Italian who could fix the Vatican, a combination that some said could attract votes from both camps. Before the opening of the conclave today, March 12, cardinals attend a solemn Mass at St. Peter’s. Photo Courtesy of BostonCatholic via Flickr.

Throughout this wrangling, Bergoglio had maintained a low profile, which was in keeping with his reputation for humility and holiness, and several electors said they found that refreshing. Moreover, Bergoglio had a fierce pastoral dedication to the poor, and he was born in Argentina to Italian immigrant parents. While he is 76, he is in good health but not so young that he is likely have a marathon pontificate.

All those elements made for an appealing combination.

“He is not part of the Italian system, but also at the same time, because of his culture and background, he was Italo-compatible,” French Cardinal Andre Vingt-Trois told reporters. “If there was a chance that someone could intervene with justice in this situation” — reforming the Curia — “he was the man who could do it best.”

In the first round of voting, not only did Bergoglio make an unexpectedly strong showing, but Scola did not fare well, and neither did Scherer or another leading contender, Canadian Marc Ouellet, who works in the Curia.

That night, sequestered at the Casa Santa Marta residence that houses the cardinals during a conclave, the reform camp began to coalesce around Bergoglio. The Argentine continued to gain strength during the two ballots on Wednesday morning. At lunch, he “seemed very weighed down by what was happening,” according to Boston Cardinal Sean O’Malley, who sat next to him.

According to La Repubblica, an Italian daily with good sources in the Vatican, Washington’s Cardinal Donald Wuerl played a key role in rallying the Americans to Bergoglio, and they were followed by European bishops such as Vingt-Trois.

As Bergoglio gained steam, Scola’s fortunes continued to decline, thanks also to “ancient envies and rivalries,” as La Stampa’s Giacomo Galeazzi put it, among the 28 Italian electors – a bloc far larger than any other country’s, but also more fractious and “inexorably hostile to Scola.” 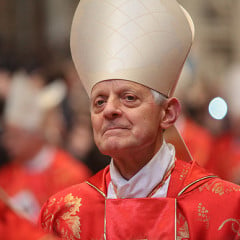 “In the last few hours there were signs that Scola’s strong candidacy was a giant with clay feet,” Galeazzi wrote.

By the fourth ballot on Wednesday — the fifth since the conclave had begun — Bergoglio passed the threshold of 77 votes on his way to upwards of 90 votes out of 115. It was just before 7 p.m., a little more than 24 hours since they started, and the Catholic Church had a new pope. “I was surprised that consensus among the cardinals was reached so soon,” said Ireland’s Cardinal Sean Brady.

Also surprised, apparently, was the Italian bishops’ conference, which was so sure that Scola would win that it sent out a message of congratulations to Scola on his election as soon as the white smoke appeared over the Sistine Chapel.

Yet there was to be no Italian restoration.

“You don’t ask why they changed their votes. Nor do you know who changed their votes. But it became fairly clear as we voted that perhaps it was going to go in some other unexpected way, but more quickly also,” said George. “There are surprises. That’s a sign of the Holy Spirit, I think.”