A recent story about Prince Charles learning Arabic in order to 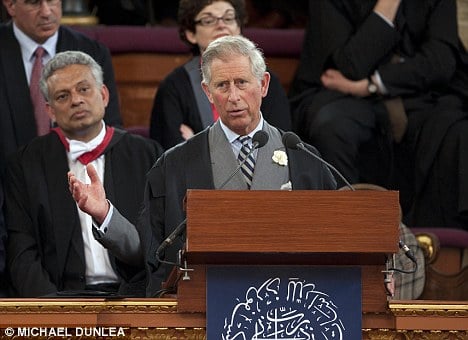 undertake a deeper study of the Qur’an has created a lot of hubbub in the British media.

The story has raised rumors yet again about the heir to the British throne’s deep fascination with Islam.

A decade ago, Islamophobes were already filled with dread that Prince Charles might have already converted to Islam.

So what is behind this attraction to Islam?  What about Islam is proving so appealing to Prince Charles himself?   To answer that question, let us listen to some of what he has to say.

Charles approaches Islam not primarily through the lens of security threats and international crises, but rather as a body of spiritual teachings.
He states:

The Islamic world is the custodian of one of the greatest treasures of accumulated wisdom and spiritual knowledge available to humanity. Much of his attractions to Islam actually comes from the insights of the Qur’an that come to identify the natural cosmos as a site where God is revealed and experienced:

There is a profound truth in that seemingly simple, old saying of the nomads — that “the best of all Mosques is Nature herself.”

Prince Charles has long displayed a deep concern for the environmental crises of the planet, and like many others he sees this not merely as a matter of science, but as a religious crisis:

The inconvenient truth is that we share this planet with the rest of creation for a very good reason – and that is, we cannot exist on our own without the intricately balanced web of life around us.

‘Islam has always taught this and to ignore that lesson is to default on our contract with creation.

This religious approach to nature is most strongly reminiscent of the writings of contemporary Muslim philosophers like Seyyed Hossein Nasr, the Iranian scholar of Sufism and Islamic philosophy who fifty years ago (and still) has warned about the environmental crisis as both related to and linked to a spiritual crisis for humanity.

Prince Charles seems to be reiterating Nasr’s view that the solution to the environmental crisis is in recovering a sense of integration, of wholeness, both inside humanity and with nature.  In this aspect, Prince Charles holds that Islam has a particular contribution to make to humanity today:

More than this, Islam can teach us today a way of understanding and living in the world which Christianity itself is poorer for having lost. At the heart of Islam is its preservation of an integral view of the Universe. Islam – like Buddhism and Hinduism – refuses to separate man and nature, religion and science, mind and matter, and has preserved a metaphysical and unified view of ourselves and the world around us.

Prince Charles is not content to address Westerners, and has traveled to Saudi Arabia to share his high esteem for Islam with select audiences there as well in a March 2006 visit: We need to recover the depth, the subtlety, the generosity of imagination, the respect for wisdom that so marked Islam in its great ages …

What was so distinctive of the great ages of faith surely was that they understood, that as well as sacred texts, there is the art of interpretation of sacred texts – between the meaning of God’s word for all time and its meaning for this time.

Lastly, Prince Charles makes a passionate case that people living in Western countries and Muslim majority countries have a special need to reach out to one another, engage one another, and learn from one another:

These two worlds, the Islamic and the Western, are at something of a crossroads in their relations. We must not let them stand apart. I do not accept the argument that they are on a course to clash in a new era of antagonism. I am utterly convinced that our two worlds have much to offer each other. We have much to do together. I am delighted that the dialogue has begun, both in Britain and elsewhere. But we shall need to work harder to understand each other, to drain out any poison between us, and to lay the ghost of suspicion and fear. The further down that road we can travel, the better the world that we shall create for our children and for future generations. Learning the language of the Qur’an is of course only a small part of the circle of connection of the British throne to Islam.  Harold B. Brooks-Baker, the publisher of the Burke’s Peerage, which serves as the genealogical guide to British royalty:

“It is little known by the British people that the blood of Mohammed flows in the veins of the queen.”

In fact, it formed the sensational headline of ‘United Press International  on October 10, 1986, reading:   MOSLEMS IN BUCKINGHAM PALACE.

Descendants of the Prophet Muhammad ruled over much of the Mediterranean.   This included the rulers of Seville, of modern day Spain.  They married into the families of Portugal and Castille.  The blood of the Prophet was carried through them to King Edward the IV, and eventually to the British throne at time of Queen Elizabeth.

The potential heir to the British throne is found studying the Qur’an, and the queens and kings of England have the blood of the Prophet of Islam running through their veins.  If all of this helps us get past the silly dichotomies of “East vs. West”, and “Islam vs. the West”, all the better.