VATICAN CITY (RNS) Pope Francis on Saturday (March 23) hailed his predecessor Benedict XVI as a “brother” in a historic first meeting between two living popes in more than 700 years. 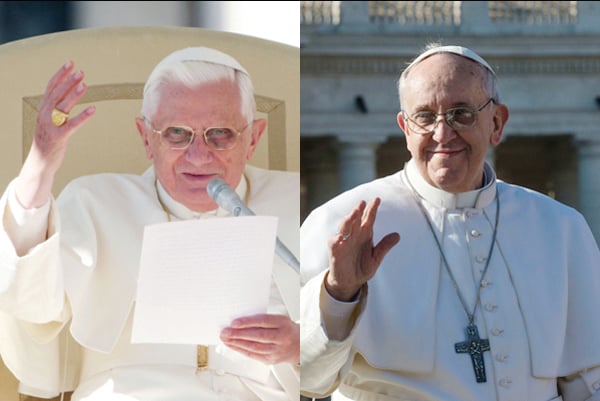 Francis left the Vatican by helicopter to visit Benedict, who has been living in the papal summer retreat of Castel Gandolfo since his resignation on Feb. 28.

The two pontiffs were both dressed in white cassocks – the popes’ signature color – but Francis’ role as the ruling pope was signaled by the white sash and cape he donned over the vest.

According to the Vatican’s chief spokesman, the Rev. Federico Lombardi, the two popes first went to pray together in the villa’s chapel.

In the chapel, Benedict offered Francis the main kneeler, but Francis refused, saying, “We are brothers,” the spokesman reported.

They both sat in the stalls for a brief prayer before a private meeting that lasted for about 45 minutes. “They spoke in Italian,” Lombardi said.

While Tuesday’s encounter marks the first time the two popes have met in person, Benedict and Francis have already spoken twice over the phone. In the first weeks of his pontificate, the Argentine pope has often praised his predecessor’s example and record.

On Feb. 28, Benedict promised his “unconditional reverence and obedience” to his his successor during the last official act of his pontificate, a farewell audience with cardinals at the Vatican. He said he would live “hidden from the world” after his resignation.

The Vatican didn’t disclose what the two popes discussed during their private meeting.

Before resigning, Benedict decreed that a confidential report compiled by three cardinals on the so-called Vatileaks scandal would be seen only by the new pope. On Friday, Lombardi denied that Benedict had prepared a 300-page personal memorandum for his successor.

During their Saturday meeting, Francis gave Benedict an icon, praising the former pope’s humility. “You gave us a great example of humility and tenderness,” he said, according to a clip of the meeting released by Vatican TV.

“It was a moment of profound and elevated communion,” Lombardi told Vatican Radio.

Later during the visit, the two popes ate lunch together with Benedict’s two private secretaries, Archbishop Georg Gaenswein, who is also the Prefect of the Papal Household tasked with arranging Francis’ schedule, and the Rev. Alfred Xuereb, who is serving as the Argentine pontiff’s aide in the first weeks of his pontificate.

Benedict, who traveled out to the villa’s helipad to welcome Francis and warmly embraced him upon his arrival, looked visibly frailer compared to his last public appearance on Feb. 28.

Argentine Cardinal Jorge Bergoglio of Buenos Aires was elected on March 13 after a two-day conclave.

In the first weeks of his pontificate, he has shown a different approach to the papacy from his predecessor, with a preference for simplicity, a keener focus on the poor and the environment, and a warmer touch when meeting with people.