(RNS) Now that the cardinals have elected and installed their new boss, Pope Francis can get to work being the Roman Catholic pontiff, with his next order of business doing something no other pope has done in centuries: meet the guy he replaced. 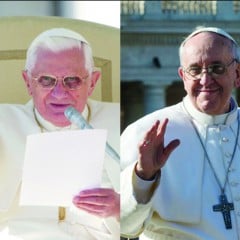 That will happen on Saturday (March 23), when Francis is scheduled to travel a few miles outside Rome to the hilltop town of Castel Gandolfo, the summer papal residence where Benedict XVI has been staying — out of sight — since he resigned and left the Vatican on Feb. 28.

Benedict’s resignation — the first by a pope in 600 years — paved the way for the conclave that elected Francis on March 13, but it also created an almost unprecedented potential for confusion and division in a church hierarchy that has room for only one pope at a time.

“Benedict XVI could turn into a shadow pope who has stepped down but can still exert indirect influence,” said Hans Kung, the dissident Swiss theologian and friend (as well as frequent critic) of Benedict’s since he and the former Joseph Ratzinger were up-and-coming theologians.

Kung noted that Benedict will live in a renovated monastery inside the Vatican walls and he is keeping his personal secretary, Archbishop Georg Gaenswein, who will also remain as head of the papal household under Francis — in effect working for the new boss while going home to live with the old one.

Further complicating an already novel situation is that Benedict, before he left office, decided that he would continue to wear white and he would take the title of “emeritus pope,” a position that never existed. He said he would continue to be called Benedict XVI, rather than reverting to his birth name, and he would be addressed as “Your Holiness,” a term previously reserved only for the reigning pope.

“I just cannot imagine anything so potentially divisive,” Michael Knowles wrote in a pointed essay in The Tablet of London, a leading Catholic periodical. “That is not resignation: that smacks of hanging on.” It will look, he added, “like we have two popes both living within the walls of the Vatican. The whole situation is simply intolerable.”

Even one of the church’s leading canon lawyers in Rome, the Jesuit priest Gianfranco Ghirlanda, wrote in a prestigious, Vatican-approved journal that Benedict should not be called an “ex-pope” and that “the pope who has resigned is no longer pope.”

Benedict did say he would not wear the ermine-trimmed mozzetta, or short cape, that is a symbol of papal authority, nor would he wear the distinctive red shoes that attest to his willingness to shed his blood for the church. And he said he would remain “hidden from the world” inside the Vatican.

But Francis also has so far declined to don the mozzetta as part of his effort to tone down displays of papal power, and he has continued to wear the battered black shoes he brought with him to Rome from Argentina, which may add to a weird visual similarity during Saturday’s courtesy call.

In terms of church law, at least, there is no conflict or confusion on this issue: Francis is the pope, with all the authority that conveys. Benedict has no power to do anything.

In reality, however, much more is in play.

A pope’s effectiveness rests on gaining a hearing and the assent of the flock; in a church that is already deeply divided, those who disagree with Francis may impute an influence to Benedict that could appear to compromise the current pope’s authority, which is supposed to be absolute.

Some argue that the aura of the papacy has already been undermined by Benedict’s stunning resignation; it was always assumed that a pope was pope until he died.

There are, to be sure, practical reasons for Benedict to live in the Vatican rather than returning to his former Bavarian home in Regenbsurg, for example. One is security: The Vatican does not have the resources to provide round-the-clock protection in another country for an ex-pope, who is in effect a former head of state. Nor would a host country want to take on that cost and responsibility.

Similarly, by remaining in the Vatican, a sovereign nation, Benedict retains immunity from efforts to prosecute him in clergy sex abuse cases. Such charges are unlikely to go anywhere, but fighting them could prove embarrassing both for the church but also for any other country that was hosting Benedict.

“At first I thought it’s not good for him to be in Rome,” retired Washington Cardinal Theodore McCarrick told the National Catholic Reporter.

“Now I think it’s for the best, because it prevents anyone who doesn’t like the new man from saying, ‘I’ll go up to Regensburg and talk to (Benedict).’ Now you can’t do that. You can’t get to him unless he wants to be gotten to,” McCarrick said.