WASHINGTON (RNS) The NCAA’s March Madness is down to the Sweet Sixteen, but Lent Madness has already skipped through the Saintly Sixteen, the Elate Eight, and the Faithful Four to crown an unlikely champion with a golden halo. A woman who wasn’t even a priest — Labor Secretary Frances Perkins — won the final round of the “Lent Madness” online tournament to win the coveted ”Golden Halo” prize. RNS photo courtesy Forward Movement

Frances Perkins, a champion of the working poor and the first woman to serve in a White House cabinet, beat out St. Luke the Evangelist to win the single-elimination online tourney of Episcopal saints.

Perkins, a heroine in the labor movement but unknown to many Americans and even many Episcopalians — was not expected to win. It’s akin to Florida Gulf Coast University actually taking the NCAA championship.

The competition — started four years ago by two Episcopal priests as a “whimsical Lenten devotion” — starts with 32 saints and this year prompted nearly 100,000 people to fill out brackets. Along the way, administrators of lentmadness.org post mini-biographies of the contenders, fun facts about their lives, and stories of their struggles and triumphs.

Players formed “a massive online community in which we all learned a bit more about how God works in the lives of people struggling much as we do,” said the Rev. Scott Gunn of Cincinnati, one of the competition’s founders.

Perkins succeeds Mary Magdalene, who last year met Queen Emma of Hawaii in the finals. Episcopal saints — ancient and modern — are considered heroes of the faith in Christian history, as compared to Catholic saints, who are canonized.

Perkins’ Lent Madness victory, announced on the Wednesday (March 28) before Easter, inspired jubilation at the Labor Department headquarters in Washington, which is named in her honor.

“There are 17,000 employees of the U.S. Department of Labor here and abroad,” said spokesman Carl Fillichio, “and almost everything we do she either thought of or envisioned.”

Boston-born Perkins, the longest-serving U.S. labor secretary, headed the department for Franklin Roosevelt’s entire presidency and helped establish a bevy of New Deal programs designed to pull the nation out of the Great Depression and weave a safety net for the working poor and their families. 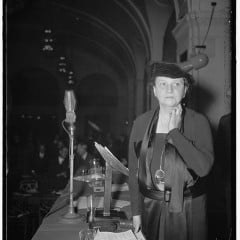 Frances Perkins, a champion of the working poor and the first woman to serve in a White House cabinet. RNS photo courtesy Library of Congress

She can be credited in great part for the minimum wage, unemployment insurance, the 40-hour work week, occupational safety protections and large swaths of the Social Security Act, among other public policies and programs.

“She is an icon for how baptized persons live out their ministry in the world,” said Episcopal Bishop Stephen Lane of Maine.

Perkin, who died in 1965, took her faith seriously, biographer Kirstin Downey wrote in “The Woman Behind the New Deal.”

Her faith “served as a bedrock and a way to seek meaning in life when so much seemed inexplicable,” Downey wrote.