(RNS) Cardinal Timothy Dolan, the top U.S. Catholic prelate, says the Roman Catholic Church has to make sure that its defense of traditional marriage is not reduced to an attack on gays and lesbians.

Dolan is president of the U.S. Conference of Catholic Bishops and last month was reputed to have gathered some votes in the Vatican conclave where Pope Francis was eventually elected. 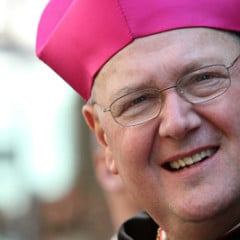 Cardinal Timothy Dolan, the top U.S. Catholic prelate, says the Roman Catholic Church has to make sure that its defense of traditional marriage is not reduced to an attack on gays and lesbians. RNS photo by Gregory A. Shemitz

He made his remarks on two morning talk shows on Easter Sunday (March 31), just days after the Supreme Court heard arguments in two same-sex marriage cases.

Dolan says the church could work on being more welcoming to gays and lesbians, noting it hasn’t “been too good at that.”

Dolan, who is archbishop of New York, was blasted by gay marriage opponents for failed lobbying efforts when the state passed gay marriage legislation in 2011.

On Sunday on the ABC News program “This Week,” he said the church tries its “darnedest to make sure we’re not an anti-anybody.”

Dolan says he would tell gay men and lesbians that God loves them and they’re entitled to friendship. But he says marriage is a union between a man and a woman “where children can come about naturally.”

Dolan made similar comments on CBS’ “Face the Nation.”

Francis DeBernardo, executive director of the gay Catholic group New Ways Ministry, which has often been at odds with the church hierarchy, called Dolan’s remarks “nothing short of an Easter miracle.”

“This is the first time that the cardinal has made such a positive statement about God’s love for lesbian and gay people,” DeBernardo said. “Such a statement is a refreshing change from the usual harsh rhetoric that the church hierarchy uses when discussing LGBT issues.”