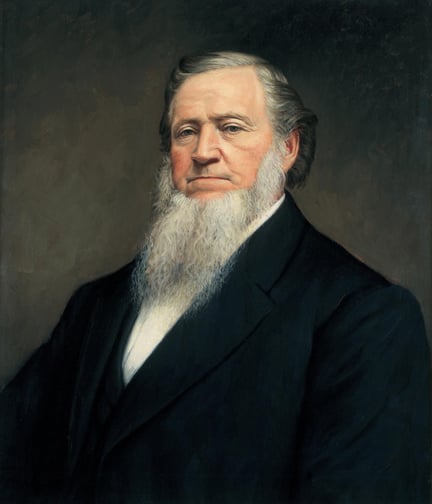 SALT LAKE CITY (RNS) If they were alive today, nearly half the presidents of the Church of Jesus Christ of Latter-day Saints — from Brigham Young in the 19th century through George Albert Smith in the 1940s — would be forbidden from serving in the faith’s 141 temples worldwide.

That’s because being clean-shaven is generally a requirement for men to be Mormon temple workers. Whiskers are fine for temple-going members, but even nicely trimmed beards and mustaches are no-nos for temple workers.

“It is ironic that temple workers are expected to be more clean-shaven than the deity figures — God and Jesus Christ — portrayed in LDS films and portraits,” says Armand Mauss, a leading Mormon sociologist in Irvine, Calif.

“Maybe men will have to achieve deity status before they will get their beards back.”

This barefaced standard extends beyond what is expected of instructors at LDS Church-owned Brigham Young University — which allows mustaches. (BYU students and faculty can get a “beard waiver” if they cannot shave for medical reasons or if they are involved in a dramatic production.)

The temple-worker policy parallels requirements for the faith’s full-time missionaries and has become the standard for the church’s seminary and institute teachers as well as its top governing hierarchies. Indeed, starting with David McKay in 1951, every LDS “prophet, seer and revelator” has been clean-shaven, as has nearly every apostle.

That standard has trickled down to the local level, even though facial hair is not mentioned in the church’s Handbook, which lays out institutional rules and guidelines. It remains despite the fact that nicely trimmed beards are popular again across the generations and professions — including doctors, lawyers, advertising executives, teachers, sports figures and many others.

Just not in the LDS church. 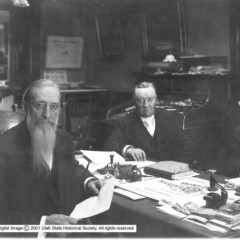 “Bearded men in Europe will tell you,” Mauss said, “that they have been required to shave off beards of long-standing after being called as bishops and stake presidents.”

In 1971, Dallin H. Oaks, then BYU’s president, rejected the argument that, since past LDS leaders had beards, it should be OK for modern Mormon men as well.

“Our rules against beards and long hair are contemporary and pragmatic,” Oaks told the student body. “They are responsive to conditions and attitudes in our own society at this particular point in time … (and) are subject to change.

“I would be surprised,” Oaks said at the time, “if they were not changed at some time in the future.”

That was 42 years ago. Oaks is now a senior apostle, and hairless faces remain the expectation. So, what happened?

“Once these norms were ‘canonized’ at BYU through the honor code … they became the standard not only for the coming generations of Mormon youth, but, by extension, for their fathers as well,” Mauss said.

“Any men who wish to be considered eligible for future leadership (tend) to dress always in the priesthood-leader fashion, including the clean-shaven, white-shirt, dark-suit look.” 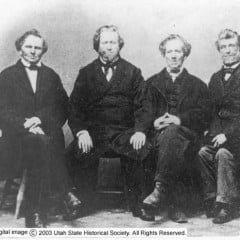 It is “a studied effort to ‘look like the brethren,'” he said, “who are assumed by many to have reached a higher spiritual plane.”

When a member of BYU’s student council recently tried to ask classmates about the possibility of loosening the university’s facial-hair and hair-length rules, the survey was removed from the school’s site because, as spokeswoman Carri Jenkins said, the student did not “go through the proper (approval) process.”

When asked why BYU barred beards, Jenkins had no answer.

“No one is saying there is anything wrong with beards,” she said. “It’s just part of how we have chosen to represent ourselves; it’s just part of our dress and grooming standards.”

Clearly, that hasn’t always been the case.

Throughout its 183-year history, the LDS church has had a shifting, sometimes contradictory standard for facial hair.

Mormon founder Joseph Smith was clean-shaven when he launched the movement in 1830 at age 24 and remained that way until his murder in 1844 at age 38. But subsequent LDS leaders, as they aged, grew beards like their peers as signs of maturity or personal style.

When Mormon apostle Heber J. Grant arrived in England in 1903 to oversee the faith’s evangelizing abroad, his predecessor had required missionaries to grow beards as symbols of their maturity and dignity. A few days into Grant’s assignment, a timid missionary inquired as to whether he might be allowed to shave. Grant, a future church president, readily agreed. 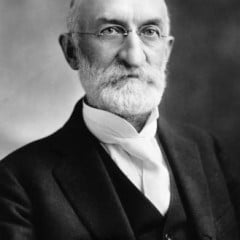 Then came the handsome — and clean-shaven — McKay and the rebellious 1960s. Before long, beards took it on the chin.

“In the minds of most people at this time, the beard and long hair are associated with protest, revolution and rebellion against authority,” Oaks said in that 1971 speech. “They are also symbols of the hippie and drug culture. … In addition, unkemptness — which is often (though not always) associated with beards and long hair — is a mark of indifference toward the best in life.”

By the 1980s, beards were more a matter of style than protest, and mainstream Americans — including many Mormon professionals and converts — went with them.

“I grew a beard because my older brother, Tony ... had a beard,” recalled Matt Marostica, bishop of the LDS Berkeley (Calif.) Ward, “and I really liked the way it looked on him.”

Marostica’s future bride, Pamela, liked how it looked and asked him to grow one for their wedding in the Salt Lake Temple in 1983.

“This meant that I had to stop shaving right at the end of my BYU semester,” he writes in an email. It worked. My beard looked pretty good for the wedding.”

The LDS leader has had that facial hair ever since — with the exception of a couple of years when he taught political science at BYU — and hasn’t run into much bristling, even from Mormon apostles.

Marostica was the only LDS bishop with a beard at a recent leadership training meeting of 11 LDS regional bodies in the Bay Area. Mormon apostle Quentin L. Cook led the discussion and said nothing about it.

“I proudly introduce myself to apostles as Bishop Marostica,” he said. “None of them have even blinked at the beard. I certainly haven’t been asked to shave it in the five years I’ve been bishop.”