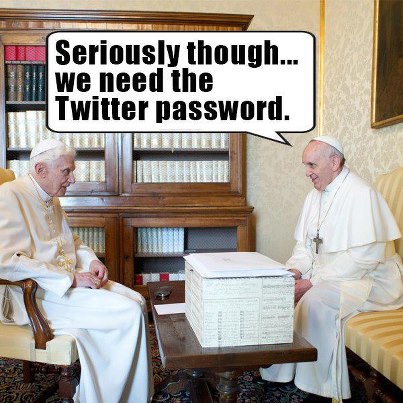 Pope Francis met this morning with the head of the Congregation for the Doctrine of the Faith (the Vatican’s doctrine HQ) and wants to continue a hard line on abusive priests. No mention of continued crackdowns on nuns or rogue theologians.

Remember that case of a college professor in Florida who had students stomp on a piece of paper with “Jesus” written on it? She’s been put on leave, but only to protect her safety, Florida Atlantic University says.

Students at Liberty University will be able to pack heat in the classrooms under new rules adopted by Jerry Fallwell’s school.

Worth watching: HBO airs a documentary on Monday (Holocaust Remembrance Day) about the Jewish couple from Philadelphia who set out to rescue 50 children from Nazi-occupied Austria.

From the Dept. of Well That Was Short, a North Carolina bill that would allow the state to ignore the constitutional ban on an established religion won’t see the light of day.

The Catholic Archdiocese for the Military is none too pleased that “Catholicism” was included with other examples of “religious extremism” in an Army training presentation, alongside al-Qaida, Hamas and, for good measure, evangelicals. Here’s the full list: Dust off your Weather Girls CDs and break out your umbrellas: Culture warriors Matt Barber and Mat Staver are continuing the meme that the reason God sent Noah’s flood was to stop gay marriage.

Speaking of, Southern Baptist President Fred Luter says he didn’t mean to imply that we may be going to war with North Korea because gays are getting married and may be allowed into the Boy Scouts.

Guyism — dubbed the source for “what guys need” — lists “9 of the most ridiculous televangelists.” Coming in at No. 1: Benny Hinn, or John Hagee (depending on how you read the list)

Significant because it “appears to have been met mostly with a shrug”: Florida Sen. Bill Nelson, a conservative-ish Democrat, becomes the 51st senator to support gay marriage: “If we are endowed by our Creator with rights,” Nelson said in a statement, “then why shouldn’t those be attainable by Gays and Lesbians?”

More evidence of the cultural shifts around us: More Americans (52%) now support the legalization of marijuana than oppose it (45%). And it aint even 4/20 yet.

Americans think the Bible holds the answers to the nation’s moral ills, but they’re in no rush to dust off one of the 4.4 Bibles in their homes.

A judge in Oregon said that children who are wards of the state may be vaccinated over their parents’ religious objections.

The Government Accountability Office (basically a giant government consulting firm) wants the State Department and the U.S. Commission on International Religious Freedom to kiss and make up.

Feminists across Europe staged a “topless jihad” (warning: some may find the photos racy or NSFW) in support of a Tunisian woman who posted a photo of herself with the words “I own my body; it’s not the source of anyone’s honor” and was threatened with being stoned to death.

Egyptian politicians may now use religious slogans in their campaign ads, but can’t use slogans based on “gender or religious discrimination,” under a new law passed by Parliament.

Pope Francis has doubled his Twitter followers in just seven weeks, up to 5 million. And no, we don’t have tweet envy. Even though the guy is pretty freakin’ popular (for now).

Speaking of il Papa, his sister admits she was rooting for another guy, Brazil’s Cardinal Odilo Pedro Scherer. But only because she didn’t want to lose her brother to Rome.

Jewish women will be allowed to hold prayer rallies at the Western Wall without being arrested, the shrine’s caretaker assured an outraged government envoy.

The Christchurch Cathedral that was destroyed in the 2011 earthquake? There are now 3 proposed replacements, and the public can vote on their favourite, but church leaders will have the final say.

Phew. That was a long one. And with that, it’s off to the weekend. But before you go, make sure we have your email address below so you can receive the daily Roundup for free each day: