NEW YORK (RNS) A gay man ousted from posts at his Long Island parish after a critic complained that he had married his partner delivered a petition with more than 18,000 signatures on Thursday (April 11) to Bishop William Murphy, asking to be reinstated.

“Bishop Murphy, please let Nicholas Coppola resume volunteering at his parish – and make it clear that faithful gay and lesbian Catholics are welcome to participate fully in parish life in your diocese,” reads the petition. Murphy is longtime head of the Roman Catholic Diocese of Rockville Centre. 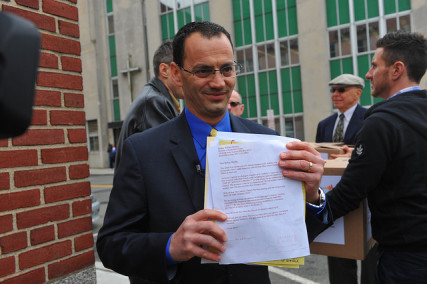 According to gay activist network GLAAD, which has been assisting Coppola, a security guard at the diocese agreed to deliver the petition but said that neither Murphy nor diocesan officials would meet with Coppola and representatives of the activist groups who accompanied him.

The diocese later released a statement saying that it “respects those who may have signed a petition” but said that it cannot change church teaching against gay marriage and expects others to respect that position as well.

Catholic doctrine “is not discrimination against homosexual men and women” and “no one has a right to discriminate against persons because of sexual orientation,” Murphy said in the statement.

But “all church institutions and teachers of the faith are bound to support this teaching, particularly by their public action,” the statement added.

In January, the pastor at St. Anthony’s Roman Catholic Church in Oceanside stripped Coppola of his jobs as a religious education teacher, lector and visitation minister. A top aide to Murphy had conveyed concerns to the parish after the bishop received an anonymous letter pointing out that Coppola wed his partner under New York’s new gay marriage law.

The case came to light last week after top Catholic officials, led by New York Cardinal Timothy Dolan, president of the U.S. Conference of Catholic Bishops, said that the church needs to do a better job welcoming gays and showing that the institution is not “anti-anybody.”

GLAAD responded by promoting Coppola’s story to show that the church’s actions were not matching its words.

The petition drive, organized by the group Faithful America, was another effort to put pressure on the hierarchy, which is facing a sea change in public opinion on gay rights as well as the prospect of state laws and even the Supreme Court opening the door to same-sex marriage. 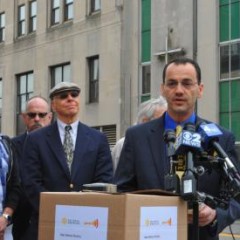 “The best part about telling my story is that it has reminded me that I’m not alone,” Coppola said Thursday, according to GLAAD. “I have been given so many words and signs of support and love by my fellow parishioners at St. Anthony’s parish. I’ve been stopped during my routine day by people who are letting me know that they care for me.”

While many Catholics have voiced support for Coppola, church conservatives have blasted his cause as an example of liberal intolerance and “bullying,” as the Catholic League’s Bill Donohue put it on Thursday.

“The American people respect the autonomy of religious institutions to craft their own rules and regulations, and they do not look kindly on bullying,” Donohue said in a statement.

“How ironic it is that those who have been screaming the most about the evils of bullying are the very ones who are its greatest practitioners – against Christians, no less. It’s time they learned the virtue of tolerance.”