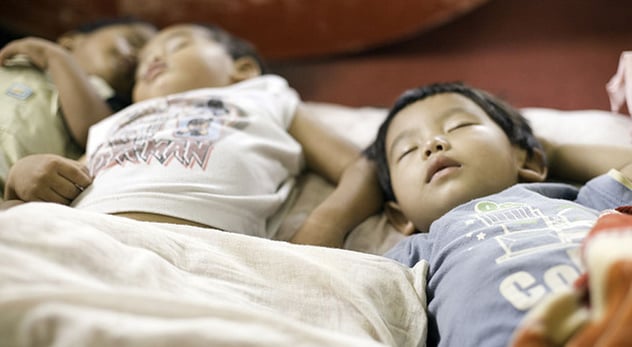 Children sleep in an orphanage in Nepal. Courtesy of Flickr Creative Commons: (bit.ly/102eiwp)

No one will ever accuse Mother Jones of being friendly to Christians, but you know their disdain for the faithful has reached fever pitch when they begin attacking Christians for the good things they’re doing.

According to the liberal publication, Christians are apparently too concerned with adoption. The article, “Orphan Fever: The Evangelical Movement’s Adoption Obsession,” argues that as a result of Christians’ efforts to adopt orphaned children, kids who may have been illegally obtained are being placed in oppressive, fundamentalist homes in order for parents to evangelize them. The problem is that the writer—Kathryn Joyce, author of The Child Catchers: Rescue, Trafficking, and the New Gospel of Adoption, which not-so-coincidentally releases next week—relies on weak sources to paint a partial and distorted picture.

The article tells of Sam and Serene Allison, a Tennessee couple who adopted four children from an orphanage outside of Monrovia, Liberia. Their adopted kids were reportedly physically abused and denied a proper education. In fact, according to Joyce, “all but 3 of the Campbell’s and [Serena’s parent’s] 10 adoptions ran into serious problems.”

Allegations of child abuse should not be ignored or minimized by anyone for any reason. The proper authorities need to investigate these allegations, and they should not only punish anyone at fault, but also take appropriate measures to prevent this sort of occurrence in the future.

At the same time, one has to make a logical leap of stratospheric proportions to assume that the behaviors of this family are somehow representative of the thousands of Christians who adopt each year. Joyce presumably knows this, so to build her case, she leans on a slew of fringe ministries, publications, and personalities.

Much of the article draws from material published in a “magazine” called Above Rubies. It struck me as odd that even though I’ve covered the American Christian movement in over 500 articles for dozens of publications during the last decade, I’d never heard of the publication that Joyce seems to believe is so influential. Upon further research, Above Rubies basically amounts to a ministry newsletter and blog that exerts negligible influence over the Christian community. At the time of publication, the twitter account for the entire Above Rubies ministry was at an unimpressive 664 followers.

While she weaves in less-than-interesting information about more mainstream adoption advocates like pastor Rick Warren, she never makes a connection between the behaviors and beliefs of more mainstream Christians and the fringe few. I can only conclude that Joyce is either so unfamiliar with American Christianity that she doesn’t know who the movement’s influencers actually are or she’s padding her piece to inflate the thesis.

To argue this thesis, Joyce implies that the Christian adoption movement is a cryptic attempt to evangelize unwitting children. But according to Russell Moore, President-elect of The Ethics and Religious Liberty Commission and author of Adopted for Life, the idea that Christians’ desire to adopt children is a ruse for evangelism is little more than a tired cliché.

Joyce zeroes in on Bethany Christian Services, the nation’s largest adoption agency and an organization on whose national board of directors I serve. Unfortunately, when it comes to Bethany, Joyce can’t seem to get her facts straight.

“The article says [Bethany] donates money to orphanages and that we handle the paperwork. Number one, we don’t handle the paperwork. And whenever we donate to an orphanage, we will not do adoptions with that orphanage to avoid a conflict of interest,” says Bill Blacquiere, President and CEO of Bethany. “Additionally, whenever a child is referred to us for adoption, we perform a separate investigation with an attorney to locate the birth mother, interview family members, and verify that there is nothing improper happening. If anything questionable is discovered, we decline to be involved with that child. Joyce is alleging that we may be adopting children who were attained unethically, and that is not true.”

But the problems of this muddled Mother Jones article stretch well beyond Joyce’s non-representative sources, selective examples, broken logic, and half-truths. When she quilts all her “evidence” together, she still only tells part of the story.

Does Joyce mention that before Bethany will perform an international adoption, they attempt to reconnect the children with their next of kin, facilitate a domestic adoption, or place them in a domestic foster care program?

Does she mention that Bethany is accredited by the Hague Convention in order to prevent child trafficking?

Does she mention that in Bethany’s more than 70-year history, they’ve provided more than 70,000 women with free, confidential, professional counseling?

Does she point out that Bethany places more than 1,500 children in loving homes every year, or that only a tiny fraction of these placements experience the kinds of problems she implies is normative?

Joyce conveniently avoids telling a single story of an abandoned child being placed into a loving home even though these stories are far more common than the rare tale she tells. Instead, she sneers at Christian’s “adoption obsession” and “orphan fever,” which are about the oddest insults I can imagine. It’s like accusing the volunteers of a local soup kitchen of a “poverty obsession” or “homeless fever.” Shouldn’t liberals who claim to be protectors of children and the poor be cheering on Christians for their efforts?

“Abortion-rights supporters, such as these critics, have long lambasted evangelical Christians and their allies as caring only about unborn children. We believe, they have suggested, that life begins at conception and ends at birth.” says Moore. “When it is pointed out that Christians have always been ministering to vulnerable women and children, they turn the argument to suggest that such ministry is itself evil. If evangelical Christians didn’t adopt or care for orphans, there’s little doubt that the criticism from the same quarters would be that we are hypocrites. And we would be.”

Is this the best evidence Mother Jones can present for why Christians are such terrible people? That an evangelical denomination called on it’s members to get involved in “taking in [orphans], donating to adoptive families, or supporting hundreds of adoption ministries”? That they are igniting a movement to address the global orphan crisis through constructing an adoption culture in their churches?

In the end, Kathryn Joyce curses the darkness without lighting a candle. She attempts to pour cold water on the Christian adoption movement, but her ideas for actually solving the orphan crisis that now affects more than 100 million children are more than lacking; they’re non-existent. We should expect more from even an unashamedly partisan publication like Mother Jones. Not to mention a writer who recently published a 352-page book on the subject.

About the only thing Kathyrn Joyce gets right is that there is indeed an adoption movement sweeping through Christian churches and communities. Thousands of orphaned children have been given someone to call “mommy” and “daddy” as a result. Believers in America are finally waking up to their responsibility to demonstrate mercy to those in need—orphans, the poor, immigrants. These are trends that should be celebrated, not criticized.