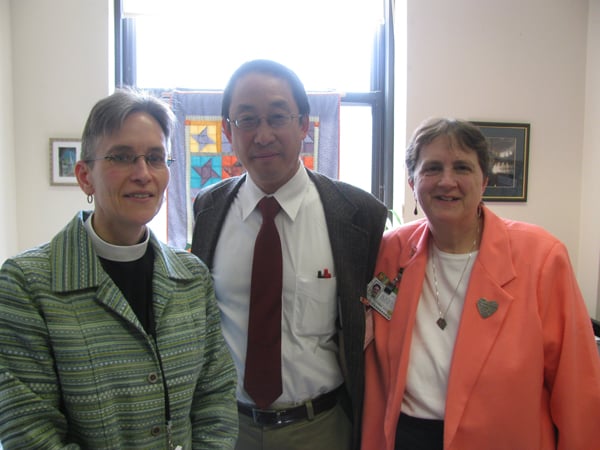 BOSTON (RNS) Two days after the Boston Marathon bombings, Boston Medical Center chaplain Sister Maryanne Ruzzo was checking on staffers who’d been caring for the injured when she received a page. A bombing victim wanted to see her. 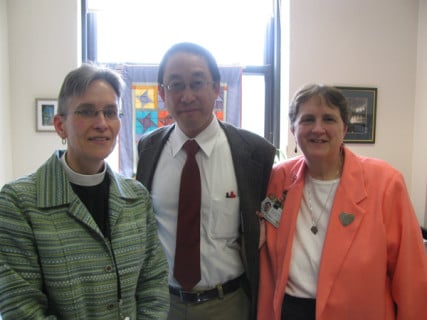 The bedside was fraught with worry. A woman in her 30s had lost a leg to amputation as surgeons deemed it unsalvageable. Still suffering multiple injuries, she was now heading into surgery again, knowing she might wake up with no legs at all.

Ruzzo stood among the woman’s parents and siblings and did what she does best: listen. She heard their fears, including concern for the woman’s husband, who was being treated at a different hospital and who also might lose a leg to amputation. Then she prayed.

“Other people might not want to feel the pain and say, ‘Oh, it’s going to be fine,’” said Ruzzo, the Archdiocese of Boston's coordinator of Catholic services at BMC. “We just try to be present and listen to them. … I prayed for the surgeons and the nurses.”

In a week when Boston hospitals cared for more than 170 bomb victims, staff chaplains were suddenly in great demand. They moved calmly from emergency departments to waiting rooms and employee lounges, offering a compassionate ear and much-needed comfort to anxious patients, family members and staffers.

“People think, ‘OK, here’s the guy who kind of represents the universe, or God, or the infinite or eternity,’” said Sam Lowe, a Quaker staff chaplain at BMC.

“If I stand there and I’m able to hear their story … it reconnects them to the rest of humanity,” at a time when they’re apt to feel terribly alone.

Lowe was making rounds to patients’ rooms Monday when he heard a barrage of sirens. Moments later, a nurse asked him, “Shouldn’t you be in the emergency room, chaplain?”

En route to the emergency room, Lowe passed an interpreter who told him the situation there was gruesome. "There’s blood, body parts, a gory scene. And chaos.” He passed a patient transport supervisor, who was setting up 20 cots in the lobby for emergency room overflow and called to the chaplain: “Pray for me!” Staff who’d been in the emergency room were eager to vent to him as well.

“They didn’t need a lot of prompting,” he recalled. “They were shocked: ‘What’s going on? Why is this happening?’”

Lowe soon sought out the 50-plus family members who were frantically trying to get information about loved ones at BMC and other hospitals. He was careful not to introduce himself immediately as a chaplain. Sometimes in a crisis, people panic when they see a chaplain, Lowe explained, because they assume he or she is there to help deliver the worst possible news.

“Occasionally someone would look up from an iPhone and say, ‘I need a charger,’” Lowe said. “So I would help them find an outlet (and then) say, ‘By the way, my name is Sam, and I’m the chaplain, just making my rounds.'”

The needs of bomb victims and their loved ones extend well beyond managing physical wounds, said Lisa Allee, director of BMC’s Community Violence Response Team. Not only will they face long-haul recoveries, but the immediate trauma they’ve endured can trigger a range of intense emotions as well as post-traumatic stress disorder.

As psychological and spiritual needs became more apparent, chaplains provided a calming presence to help victims and caregivers not get overwhelmed. They tried to be anywhere anyone felt isolated or worn down by daunting circumstances.

When staff noted one victim’s family was waiting alone in a far corner of the sprawling hospital complex, Lowe ventured out to find and sit with them. Several times this week, he praised BMC’s receptionist for showing kindness and patience under pressure as panicked callers pleaded for information that wasn’t always available.

As bombing victims begin to consider their futures, doctors are optimistic that all their patients -- including BMC’s five amputees -- will go on to lead productive lives. Advancements in prosthetic technologies, coupled with insights from Iraq and Afghanistan, can enable even the most severely injured victims to recover well, according to Peter Burke, BMC chief of trauma services.

Whether the injured woman’s leg or her husband’s can ultimately be saved remains unknown, Ruzzo said. Yet no matter what, patients will receive assurance from chaplains that God is with them and the Spirit overcomes adversity.

“One family said, ‘You know, chaplain, you’ve probably seen a lot of people who’ve been in similar circumstances, and they’ve made it somehow -- right?’” Lowe recalled. “And I said to them: ‘I have.’”